The ASCO Post’s Integrative Oncology series is intended to facilitate the availability of evidence-based information on integrative and complementary therapies sometimes used by patients with cancer. Ting Bao, MD, DABMA, MS, and Jyothirmai Gubili, MS, present information on the potential anticancer effects of the mushroom Coriolus versicolor and suggest further studies are needed in different populations to confirm the survival benefits seen in some patients with gastrointestinal malignancies when it was given in combination with chemotherapy. 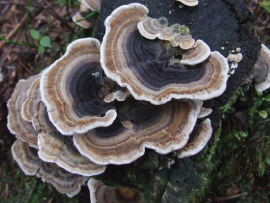 A mushroom found all around the world, Coriolus versicolor is not consumed as food but employed as medicine in traditional Asian medical systems. Polysaccharide K and polysaccharide peptide, products derived from Coriolus, are thought to be responsible for its immunomodulatory and anticancer effects. Polysaccharide K is commonly used to complement standard cancer treatments in Asian countries. Another extract derived from the mushroom, versicolor polysaccharide, is also being investigated for its potential anticancer effects.

Coriolus is marketed in the form of capsules, extracts, or teas. Polysaccharide peptide and versicolor polysaccharide are sold as dietary supplements in the United States.

The majority of clinical investigations on Coriolus have been conducted using proprietary products of polysaccharide K from Japan and polysaccharide peptide from China. In randomized studies involving patients with gastric cancer who underwent curative gastrectomy, the addition of polysaccharide K to adjuvant chemotherapy with mitomycin and fluorouracil (5-FU) was shown to improve the disease-free rate (P = .047) and survival (P = .044) at 5-year follow-up, compared with the chemotherapy-alone group.1 Similar findings were reported with a combination of mitomycin, tegafur, and polysaccharide K, which significantly increased the 5-year survival over the standard chemotherapy treatment.2

Polysaccharide K has also been researched for its beneficial effects. In a randomized study involving patients with advanced non–small cell lung cancer (NSCLC), treatment with polysaccharide K over 28 days resulted in significant increases in immunoglobulin G (IgG), immunoglobulin M (IgM), and leukocyte and neutrophil counts (P < .05) compared with placebo. Although there were no improvements in NSCLC-related symptoms, fewer patients who received polysaccharide K withdrew from the study because of disease progression than did control patients.7

Investigations of the use of Coriolus extracts by themselves or in formulas with other botanicals revealed positive immunomodulatory effects.8,9 However, trials in patients with breast cancer,10 hepatocellular carcinoma,11 or leukemia12 yielded mixed data.

Additional studies indicate that versicolor polysaccharide, a hot water extract of Coriolus, augmented the development of intestinal tumors in a murine model.13 Further research is needed to determine the value of such extracts as anticancer agents.

Physicians should know that Coriolus extracts are used in supplemental forms by many patients with cancer. Although beneficial effects have been attributed to these products in a few studies, definitive data have yet to be determined. Also, comparative studies of the clinical effects of polysaccharide K, polysaccharide peptide, or raw Coriolus extracts have not been conducted.

A medicinal mushroom blend (that included Coriolus) was shown to inhibit cell proliferation and to induce cell-cycle arrest at the G2/M phase in breast cancer MDA-MB-231 cells.20 The inhibition of metastatic behavior was linked to the suppression of urokinase plasminogen activator.20 Also, synergism between polysaccharide K and biologic therapies, including a concanavalin A–bound L1210 vaccine and the IgG2a monoclonal antibody against human colon cancer cells, has been reported.21

Preliminary clinical findings show consumption of polysaccharide peptide to be associated with increased leukocyte and neutrophil counts as well as increased serum IgG and IgM in patients with NSCLC.6 TNF-alpha and interleukin 8 gene expression were also induced after administering polysaccharide K to healthy volunteers and patients with gastric cancer, although individual response differed.22 In addition, polysaccharide K induced apoptosis in promyelomonocytic leukemia HL-60 cells without inducing differentiation, with p38 mitogen-activated protein kinase playing an important role in the process.23

Coriolus is generally well tolerated, but a few adverse reactions have been reported when it was used in conjunction with chemotherapy. They include passage of dark-colored stools (not originating from occult blood),24 darkening of fingernails,25 and low-grade hematologic and gastrointestinal toxicities.3

No known interactions between Coriolus and prescription medications have been reported.

Coriolus is generally considered to be a safe dietary supplement, with its different extracts being shown to prolong survival in gastrointestinal malignancies, in combination with chemotherapy, when compared with chemotherapy alone. They also prolonged disease-free survival compared with no additional treatment after surgery in a number of Japanese studies. No known herb-drug interactions have been reported. Further studies are needed in different cancer populations to determine whether such a survival benefit persists. ■

13. Toth B, Coles M, Lynch J: Effects of VPS extract of Coriolus versicolor on cancer of the large intestine using a serial sacrifice technique. In Vivo 20:341-346, 2006.