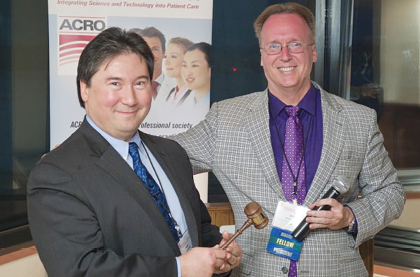 Dr. Welsh, installed as president during ACRO’s Annual Meeting in Washington, DC, will serve a 2-year term as President. In 2017, Dr. Welsh will transition to Chairman of the Board for ACRO.

In addition to ACRO, Dr. Welsh has actively and extensively served in other professional organizations. Dr. Welsh recently concluded an 8-year term as Advisor to the Nuclear Regulatory Commission’s Advisory Committee on the Medical Uses of Isotopes. He formerly served as Chair of the Radiological Society of North America’s Radiation Oncology Scientific Program Subcommittee and as an Alternate Councilor in the American College of Radiology. Dr. Welsh held or holds several leadership positions within the American Society for Radiation Oncology.

Dr. Welsh earned his medical degree from the State University of New York at Stony Brook and a master’s degree in molecular biophysics and biochemistry from Yale University. Dr. Welsh completed a residency in radiation oncology at Johns Hopkins Hospital and completed a fellowship in helical tomotherapy while at the University of Wisconsin-Madison. ■