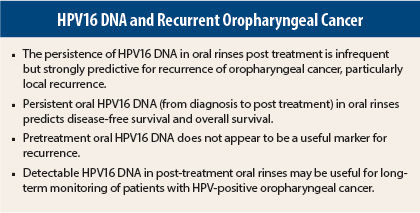 Persistent human papillomavirus DNA is infrequent in oral rinses post treatment, but when it is present, it signals reinfection and is a useful marker for recurrence as well as survival.

Detectable oral HPV16 DNA in oral rinses post treatment for oropharyngeal cancer appears to be a harbinger of poor prognosis and can predict recurrence. Oral HPV16 DNA rinses are a potential tool for long-term tumor surveillance, according to a study selected for the Best of ASCO® 2015.1

“The goal is to identify progressors early enough to intervene therapeutically. Persistent human papillomavirus (HPV) DNA is infrequent in oral rinses post treatment, but when it is present, it signals reinfection and is a useful marker for recurrence as well as survival,” said Robert L. Ferris, MD, PhD, University of Pittsburgh Cancer Institute, who discussed this study at the Best of ASCO® 2015.

There are two distinct types of head and neck cancer: carcinogen-exposed and HPV-associated cancer. The incidence of HPV head and neck cancer has increased dramatically over the past few decades, and it is now the cause of the vast majority of oropharyngeal cancers.

HPV16 DNA (the type of HPV most responsible for 95% of oropharyngeal cancers) is detectable in oral rinses but only in up to two-thirds of patients.

The study enrolled 124 patients with HPV-associated oropharyngeal cancer treated with curative intent at four different centers from October 2009 to May 2013. Oral rinses were collected at baseline after diagnosis and at 9, 12, 18, and 24 months post treatment.

Ninety percent of the patients were male, 58% were never smokers, 85% were married at diagnosis, 65% had small tumors, and 70% had advanced nodal status.

At baseline, 67 patients (54%) had evidence of HPV16 in their oral rinses. Post treatment, persistent HPV16 was detected in five patients (4%) and newly detected HPV16 was found in one patient (1%). Ninety-three percent of patients were cleared of oral HPV16.

HPV typically recurs within 4 years, Dr. Ferris explained. At 33 months of follow-up, there were 14 recurrences and 6 deaths; 2-year disease-free survival was 92%, and 2-year overall survival was 98%.

The presence of HPV16 DNA post treatment was strongly associated with survival. All five patients with persistent HPV16 DNA died.

In this study, post-treatment specimens were not collected during the first 9 months after diagnosis. Dr. Ferris questioned whether the presence of HPV16 DNA in oral rinses reflected persistent infection or reinfection.

In addition, other issues are that reproducible results were not confirmed before treatment and the reasons for new infection are unclear. ■