Five years after treatment for favorable-risk prostate cancer, men who either chose or were randomly assigned to receive brachytherapy reported quality-of-life advantages in urinary and sexual domains and in patient satisfaction compared to men who received radical prostatectomy, according to a study recently reported in the Journal of Clinical Oncology.1 Favorable risk prostate cancer was defined as Gleason score ≤ 6, prostate-specific antigen (PSA) < 10 ng/mL, stage T1 to T2a.

The men were originally approached at the University Health Network and Princess Margaret Hospital in Toronto for participation in the phase III Surgical Prostatectomy versus Interstitial Radiation Intervention Trial (SPIRIT). The trial was closed due to poor accrual, but 168 trial-eligible men who received either radical prostatectomy or brachytherapy completed health-related quality of life (HRQOL) assessments 3.2 to 6.5 years later.

A “unique” feature of the study was that all men enrolled had received identical balanced information about radical prostatectomy and brachytherapy in small-group educational sessions given jointly by a urologist and a radiation oncologist. All were considered “equally appropriate” for both treatments, lead investigator Juanita Mary Crook, MD, told The ASCO Post. She said that although only a minority of the individuals were randomly assigned to treatment, the study represents a direct comparison of the long-term effects of brachytherapy and radical prostatectomy. Dr. Crook is Professor of Radiation Oncology at the University of British Columbia, British Columbia Cancer Agency, Center for the Southern Interior, Kelowna, Canada.

At a median follow-up of 5.2 years, the investigators found a statistically significant difference in the urinary domain, favoring the men treated with brachytherapy (P = .02). Questions about the degree and frequency of urine leakage all showed a P value of < .001 in favor of brachytherapy, whereas none of the questions on irritative and obstructive symptoms (which might persist after brachytherapy) revealed a significant difference. The authors also reported highly significant differences in the sexual domain (P = .001) and in patient satisfaction score (P = .001), all favoring brachytherapy. They observed no differences in the scores for bowel or hormonal domains (see Table 1). The HRQOL instruments used were the prostate cancer–specific 50-item Expanded Prostate Cancer Index Composite (EPIC) and short-form measurements of physical and mental components. 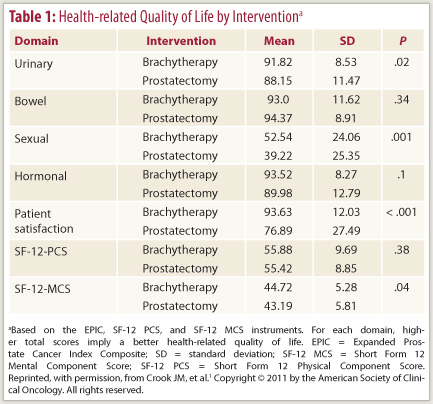 “The associated degree of the problem with these changes, as evaluated by the ‘bother’ scores of EPIC, also reached significance but at levels of P = .02 to P = .049,” the authors reported. The bother score is important because otherwise people assessing treatment side effects will make decisions about what effects might be generally troublesome, rather than what actually bothers an individual patient. “That is what quality of life is all about—the individual’s perception,” Dr. Crook noted.

The men had attended educational sessions comparing and contrasting brachytherapy and radical prostatectomy, including the specifics of the procedures and the impact on urinary and sexual function, and then had individual specialty consultations with a urologist and a radiation specialist. “If either specialist felt that on the basis of prostate size, voiding function, comorbidities, or patient preference, an individual was more suited to one treatment or the other (or neither), the patient was informed of the recommendation and was not offered participation in the trial,” the investigators explained.

Of the 268 men attending the sessions, 34 chose random assignment. Another 62 men chose radical prostatectomy and 94 chose brachytherapy. The others were directed toward external-beam radiation therapy or surveillance, the authors reported.

“The reasons for selecting one treatment over another are complex, but many men chose brachytherapy because of a perceived advantage in maintenance of potency, which was acknowledged by the urologist,” Dr. Crook said. The less invasive nature of brachytherapy was also more appealing to the men. “Since you are not having major surgery,” she stated, “the initial recovery period tends to be easier after brachytherapy.”

Asked if unwillingness to be randomly assigned to radical prostatectomy could explain the poor SPIRIT accrual rate, Dr. Crook replied, “It wasn’t just that they didn’t want to be randomly assigned to prostatectomy—they just didn’t want to be randomly assigned. They talked to their friends. They talked to their family doctor. They talked to their urologist. They have preconceived notions of what is best for them, and a lot of that is based on anecdotes,” she said, such as hearing about men who had radical prostatectomy and were still wearing pads years later. “They take that as evidence they shouldn’t have surgery, and it is hard to sway those opinions, no matter how much balanced information you give them,” she added. “But we were relatively successful in getting rid of the biases, as one in six eligible men who attended the educational sessions was actually randomized, and if people across North America had had the same success rate, we would have completed the trial.”

Among the 190 men treated, 168 responded to quality-of-life questionnaires—a response rate of 88.5%. Dr. Crook attributed the high response rate to the “relationship of trust” built between the investigators and patients.

“One of the advantages of having a clinical trial and these education sessions is that patients basically had a personal navigator to get them through the system,” Dr. Crook explained. “Kris Wallace, the research assistant who is a coauthor on the paper, talked to these men on the phone to book them into the sessions, and talked to them afterwards. So they knew that whenever they had a problem or a question, they could call Kris and she would return their call and give them the information,” she said.

“That continuing relationship obviously helped with the response rate,” Dr. Crook continued. “When she contacted them again and said, ‘Would you be interested in answering this questionnaire? I know it has been 5 years, but we want to see how things are going,’ they were happy to do it.” ■

SIDEBAR: Age at Diagnosis and Importance of Long-term Considerations

This study has the advantage of not only being patient-reported but also of patient anonymity; the questionnaires were not administered or discussed with the patients by any of the treating physicians,” the study authors reported.

“I know that patients often want to please their doctor. They don’t ...

SIDEBAR: Age at Diagnosis and Importance of Long-term Considerations

"Patients are willing to accept self-limited acute adverse effects associated with recovery” after brachytherapy and radical prostatectomy, according to the study authors. These effects “have been well documented for both modalities and are quite different. Late effects have been less well...