Cancer on the Global Stage: Incidence and Cancer-Related Mortality in Austria

The Republic of Austria is a high-income, landlocked country in south-central Europe and has been a member of the European Union since 1995.1 Vienna, the capital city of nearly 2 million people, is regularly ranked among the most livable cities in the world.2 The total population of Austria is more than 8.8 million people, with a growth rate of about 0.3%.3 The median age of the Austrian population is 44.5 years, and the life expectancy at birth is about 82 years (Table 1). Although primarily consisting of ethnic Austrians, the country is also made up of small groups of German-speaking Swiss, ethnic Germans, and other ethnic minorities. The majority of Austrians (about 75%) are Christian, though Islam is also practiced, primarily among ethnic minorities, including the Bosniak and Turkish populations. 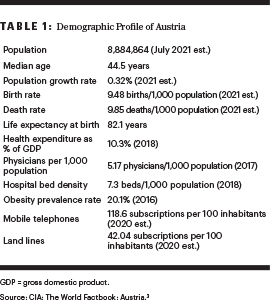 With its social health-care system, Austria is ranked among the top countries for health care globally.4 The World Health Organization (WHO) places the Austrian health-care system as ninth in the global ranking and among the top five countries with regard to quality of living.4 Through a cooperation between the federal government, provinces, and social insurance system, health care is provided through a social model grounded in compulsory insurance. As such, the health system in Austria guarantees all citizens free access to high-quality care.5 This system provides near-universal population coverage, with 99.9% of the population of Austria covered by Social Health Insurance in 2017.6 Individuals are also offered the opportunity to purchase additional health insurance if needed or offered by their employer. About one-third of the population in Austria also purchase private insurance, which typically offers the same medical care with greater comfort, access, or selection of doctors.6

In 2018, health expenditure as a percentage of the gross domestic product was more than 10%.3 Per capital health-care spending in Austria is high compared with other countries in the region. Despite high spending and performance standards, systemic issues in the health-care system in Austria remain (such as lack of primary care coordination and aftercare support) and may contribute to negative patient outcomes. For example, Austria has some of the lowest scores in rankings of primary care coordination in the European Union.7 Some argue this poor coordination is due in part to a lack of clear delineation between primary care and specialist doctors, making access points challenging for patients.8

The largest hospital in Vienna is the Vienna General Hospital, Medical University campus.9 The Vienna General Hospital and the Medical University of Vienna serve the tripartite mission of patient care, research, and training. Clinical activities at the hospital almost exclusively focus on patients with cancer in general, particularly those with lung and gastrointestinal cancers. Research activities emphasize end-of-life situations and palliative care.9 Services at the Vienna General Hospital focus on helping patients with cancer improve their quality of life in addition to supporting patients and their family throughout the course of the disease.

Over the past decade, the number of people living with a prior cancer diagnosis increased over 30%.10 This steady rise in cancer prevalence highlights the aging population in Austria, increased life expectancy, and overall improved survival of individuals affected by cancer. Women in Austria who are affected by cancer tend to survive longer than men. This may be due in part to the high prevalence of breast cancer in women, which is characterized by favorable survival.

Cancer diagnosis is rare among children and adolescents in Austria. In 2019, about 200 children younger than age 14 and 100 adolescents (aged 15–19 years) were diagnosed with cancer, representing less than 1% of all cancer diagnoses in the country.10 Leukemia, lymphomas, and central nervous system tumors were most common. About 30 children and 15 adolescents die of cancer each year in Austria. The 5-year survival rates in Austria, for some of the common cancers such as colon, lung, breast, and prostate, are above European Union averages.9

Despite wide access to cancer screening programs and declining tobacco use worldwide, behavioral risk factors, particularly smoking and tobacco use, remain high in Austria.11 The Austrian tobacco control policy is also limited, ranking the lowest in the European Union based on the 2013 Tobacco Control Scale.12 Furthermore, until 2015, smoking indoors and in outdoor eating areas was permitted, and the price of tobacco is among the lowest in the European Union. Such political and behavioral factors contribute to lung cancer as a major health problem in the country. Like other Central European nations, more than 80% of lung cancers in Austria are directly related to smoking.13

More recently, measures for stricter tobacco control are now accepted by much of the general population in Austria, particularly health professionals. Several universities and hospitals, for example, including the General Hospital of Vienna have become completely smoke-free. In addition, after heavy calls for action both domestically and internationally, the government of Austria banned smoking in bars, cafes, and restaurants effective in 2019.11 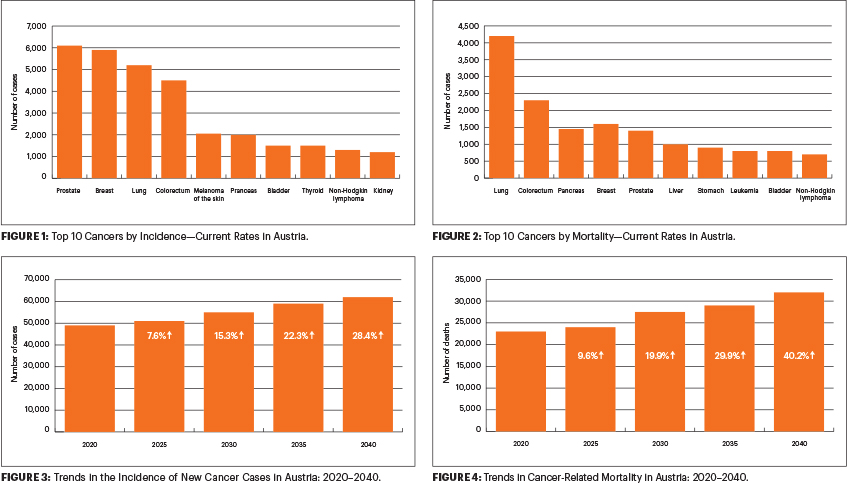 Local registries monitor cancer trends in Austria, including the Tyrol Cancer Registry; however, a national cancer registry has yet to be implemented in Austria.13 Discussion on the importance and demand for a national registry is growing. By providing more reliant information on routine care of patients, a national registry would also define areas for future improvement and research. Together with an existing robust and well-funded health-care infrastructure, these changes have great potential to continue strengthening cancer care in Austria.

DISCLOSURE: Ms. Craig reported no conflicts of interest. Dr. Are has a patent with the University of Nebraska Medical Center for laparoscopy instrument.

7. Detollenaere J, Hanssens L, Vyncke V, et al: Do we reap what we sow? Exploring the association between the strength of European primary healthcare systems and inequity in unmet need. PLoS One 12:e0169274, 2017.