Cancer on the Global Stage: Incidence and Cancer-Related Mortality in Bhutan

Located in the Eastern Himalayas, Bhutan is a landlocked, lower–middle-income country bordered by China and India. With a population of more than 850,000 people, Bhutan is predominately made up of three ethnic groups—the largest group is the Bhutia (also called Ngalop), followed by the Nepalese and the Sharchop.1 Three-quarters of the population practice Tibetan Buddhism, though Hinduism remains a significant religion, particularly among the Nepalese community.

Although much of the population lives in small scattered villages, there are several growing urban centers in Bhutan. Following road construction and economic development, urban centers contained as much as two-fifths of the population in the mid-2010s.1 Similarly, manufacturing has grown considerably, and as a result, cement, chemicals, wood products, and processed foods have become pillars of the sector. Still, Bhutan has an agrarian economy, though only a small fraction of the total area of the country is utilized for agriculture.

With a median age of about 29 years old, Bhutan is largely made up of young people. Nearly one-third of the population is younger than age 15, and three-fifths are younger than age 30.1 In 2021, the birth rate was 16 births per 1,000 people, compared with a death rate of about 6 deaths per 1,000 people, with an average life expectancy at birth of 71.5 years (Table 1). 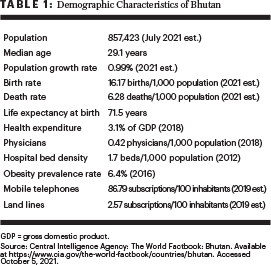 Health expenditure in Bhutan accounts for 3.1% of the GDP.1 Health-care services are delivered through as many as 32 hospitals, though the main referral hospital serves 70% to 80% of cancer cases.2 There are also over 180 basic health facilities and more than 500 outreach clinics that serve rural communities.3 Despite this robust network of health-care providers, access to primary health care remains a challenge due to the rough terrain.

Cancer is a leading cause of mortality in Bhutan and an emerging public health problem. Over the last several decades, the burden of cancer has been steadily increasing.4 Stomach cancer is the greatest contributor to the cancer burden in the country (Figures 1 and 2). In 2020, there were 118 new cases of stomach cancer and 105 related deaths, underscoring a high mortality rate.5 The other most frequent cancers in Bhutan include lung cancer (47 cases, 43 deaths in 2020), esophageal cancer (42 cases, 40 deaths), liver cancer (34 cases, 32 deaths), and cervical cancer (47 cases, 27 deaths). Men account for almost two-thirds of new cancer cases in the country.4 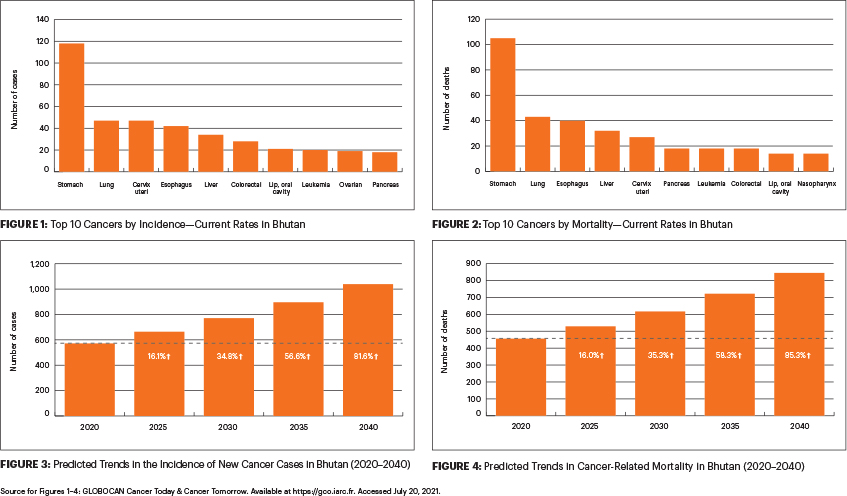 Bhutan has faced severe constraints on the country’s health budget, and many patients have sought quality care outside of the country. However, a number of successful programs and policies have been implemented to address the country’s cancer burden. The national cancer registry, for example, has laid a foundation for addressing the burden of cancer in Bhutan by enabling cancer cases to be monitored and recorded.2

The national human papillomavirus (HPV) vaccination program, which began its original campaign in 2011, has also proven successful in addressing the cervical cancer burden.6 The success of the program, including its rapid implementation and high coverage, has been widely attributed to the strength of the political commitment and reach of the primary health-care network. In addition, support from the education system through school-based vaccination delivery was instrumental in the success of the HPV vaccine program.6

More recently, in 2017, Bhutan’s Health Secretary received a Royal Command cancer control order, which set the path for building a cancer hospital in the country, strengthening the Bhutan Cancer Society, and establishing a cancer control program and cancer foundation.3 The goal of such comprehensive actions is to guide efforts toward more systematic prevention, early detection, diagnosis, treatment, and effective care services. The Bhutan Ministry of Health has also promoted efforts to integrate cancer-related services,3 as evident in its National Cancer Control Strategy (2019–2025). Over the past decade, significant efforts have been made by the local government and nonprofit organizations, which holds promise for addressing the burden of cancer in the country.

DISCLOSURE: Ms. Craig reported no conflicts of interest. Dr. Are is a board member with Global Laparoscopy Solutions; has received research funding from Pfizer; and has a patent with the University of Nebraska Medical Center for a laparoscopy instrument.