I’m Not Dying of Cancer: I’m Living With Cancer

Instead of being a death sentence, a diagnosis of stage IV gastric adenocarcinoma has given me a new life script.

I’m a psychiatrist, so I don’t say this lightly: receiving a diagnosis of stage IV gastric adenocarcinoma made me insane. I had remembered the horrible deaths due to abdominal cancer I had seen during my medical training and was terrified that would be my fate as well. I knew from looking at the Surveillance, Epidemiology, and End Results Program database that my life expectancy was probably between 6 and 9 months. To maintain some semblance of control over my life—and impending death—I decided to get in touch with Dignitas, the Switzerland-based organization that aids terminally ill patients in assisted suicide.

In the meantime, I reasoned, I would skip chemotherapy and radiation treatment and have as many high-quality weeks and months as I could until my symptoms became unbearable. Then I could make my way to Switzerland.

It sounds cliché, but now I realize that academic achievement is not what is most meaningful to me. Cancer has made me wiser.
— James R. Hillard, MD

I agreed to have surgery to remove as much of the malignancy as possible—and potentially buy more time—which included most of my stomach, my gallbladder, and 30 nearby lymph nodes. The pathology report showed metastasis in 26 of the lymph nodes, and worst of all, metastasis in the peritoneum. “I really am dead,” I remember thinking. However, a closer examination of the pathology slides showed just a 1-mm malignancy spread across the peritoneum. Aggressive therapy could potentially halt the spread of the cancer, my oncologist said, and improve my survival odds. His recommendation, and a study I found that showed patients with my cancer who underwent adjuvant chemoradiation therapy following surgery lived longer and had better quality of life than patients without chemoradiation, convinced me to ditch my plan to travel to Switzerland and give the treatment a try.

That decision saved my life. Before treatment began, I was tested for the HER2 marker—about one in five gastric cancers is HER2-positive—and my tumor has the HER2 protein. Just 2 months before my diagnosis, in December 2010, the U.S. Food and Drug Administration approved the monoclonal antibody trastuzumab (Herceptin) in combination with chemotherapy in the treatment of HER2-positive gastric cancer.1 Although, early studies of trastuzumab found the treatment extended survival in patients with advanced gastric cancer by 2 months, continual infusions of trastuzumab every 3 weeks have kept me alive for nearly 9 years. Annual computed tomography scans since then showed no evidence of cancer. Am I cured? I’m reluctant to say that because I’m afraid of jinxing my good fortune.

Although I haven’t seen study results on whether it is beneficial to stay on maintenance trastuzumab for my cancer indefinitely, a few case studies I’ve read showing that patients with HER2-positive breast cancer relapsed after stopping the drug make me hesitant to think about quitting the therapy. My plan is to continue my infusions every 3 weeks until I relapse or my insurance refuses to pay for it any longer. I’ve had over 120 infusions so far, and at $17,000 per infusion, I figure that therapy alone has cost over $2 million.

I can’t explain why I’ve lived so long with such a normally deadly cancer. I’ve enrolled in the National Cancer Institute’s Exceptional Responders Initiative to learn what genetic and molecular characteristics my tumor has that are responsible for my great response to trastuzumab, but I don’t have any answers yet. What I do know is the drug has broadened my time horizon and I no longer feel pressure to rush to complete my life goals. 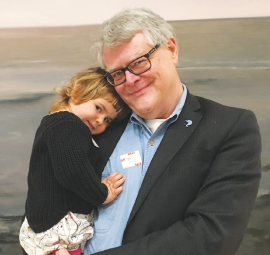 Dr. Hillard, with his granddaughter, Remy.

Changing perspective is one of the hallmarks of psychotherapy, and the most important change in my perspective since my diagnosis is going from thinking I’m dying of cancer to thinking I’m living with cancer. I’ve spent most of my professional life as a careerist robot, always looking to reach the next level of academic hierarchy. It sounds cliché, but now I realize that academic achievement is not what is most meaningful to me. Cancer has made me wiser.

Eight years ago, I thought my life would soon be over and the life experiences I expected to have would be out of reach. One of those experiences was knowing the joy of having grandchildren. Four years ago, that dream came true with the birth of my granddaughter, Remy, and just being with her gives me great happiness and peace.

Renowned psychiatrist Eric Berne, MD, had a theory that early in life we all, consciously or unconsciously, accept a script for the performance of our life. My script has been to be productive and high achieving and to rise to the top of my profession. And although I have not reached the professional pinnacle I was hoping for, it no longer matters to me. I’ve become a crusader to educate people about the danger of the bacterium Helicobacter pylori, a risk factor for the development of gastric cancer and the likely cause of my cancer. Helping prevent this cancer is among my life’s goals.

I’ve spent most of my life wanting to be somewhere else, doing something else. Now, I’m content to be where I am. I don’t know what my next life script will be, but I’m thrilled—and grateful—to have the time to find out.

Dr. Hillard is Professor of Psychiatry at Center Michigan University College of Medicine in Mt. Pleasant, Michigan. He lives with his wife, Aingeal, in Williamston, Michigan.