Cancer Care in the Palestinian Territories

The global burden of cancer is huge and growing. In 2018, there will be > 18 million new cancer cases and 9.6 million deaths.1,2 Although several recent articles have reviewed cancer in developing countries, few have focused on the Palestinian territories. There are several reasons for that, including a lack of reliable data and political sensitivities. We recently reviewed this subject in The Lancet Oncology.3 Here, we summarize these data and our conclusions as well as suggest ways to improve cancer care for Palestinians.

We use the term Palestinians to refer to modern descendants of people who lived in Palestine over many centuries and who are today largely culturally and linguistically Arabs. Our focus is on the almost 4 million Palestinians living in the West Bank, Gaza Strip, and East Jerusalem. Similarly, we use the term Palestinian territories for geographic areas where persons of Palestinian descent comprise a majority of the population, including the West Bank, Gaza, and East Jerusalem. We make no political implications with these definitions.

According to the World Bank, the Palestinian territories are a lower- to middle-income country. About 25% of the population earns less than the country-specific poverty level. The public general governmental deficit is about $500 million (U.S. dollars). The Palestinian territories rank 111 in the United Nations Human Development Index. These considerations clearly affect the ability to deliver cancer care in this region.4

Despite major challenges, primary health care in the Palestinian territories is among the best of neighboring Arab countries in life expectancy as well as in maternal, infant, and child mortality rates. However, tertiary health care needs improvement on many fronts, especially cancer care (Table 1).

In recent years, health-care needs have shifted toward chronic, noncommunicable diseases, which now account for more than two-thirds of deaths and pose a substantial challenge to the health-care system. The Ministry of Health of the Palestinian territories spends about 80% of its budget combating noncommunicable diseases. Medical referrals to facilities not overseen by the Ministry of Health constitute 40% of the budget. In 2005 to 2014, the average mortality rate per thousand people was 3% in the West Bank and 4% in Gaza, compared with 5.2% in Israel, 3.4% in Jordan, and 8% to 10% in the United States and Europe (likely explained by the younger population and incomplete reporting).5-10 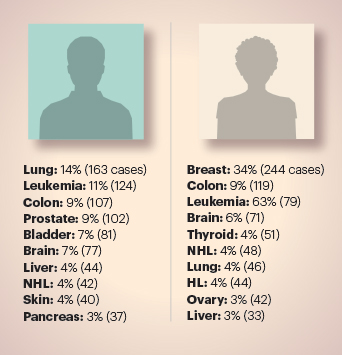 The Coordination of Government Activities in the Territories, which regulates crossing of people with cancer from the Palestinian territories into Israel, estimates more than 2,000 Gazans with cancer entered Israel in 2016 for therapy. Palestinians with cancer presenting at Israeli hospitals receive the same level of care as Israeli citizens. However, the costs of their medical care are deducted from taxes collected by Israeli authorities and are not directly returned to the Palestinian Ministry of Health.

Cancer care in the Palestinian territories was fragmented before 2000, with little coordination among pathologists, radiologists, surgeons, and medical oncologists. Persons with cancer were insured by the Palestinian government and referred to public and private hospitals. Three government hospitals in the West Bank and three in Gaza treat most people with cancer not referred elsewhere. The six hospitals have small oncology/hematology units without specialized pathology laboratories or advanced diagnostic and imaging facilities. Surgery and chemotherapy, but not radiation therapy, are generally available. There is no comprehensive cancer center offering all treatment modalities and services and there are few support services, such as palliative care, nutrition, psychosocial support, or rehabilitation.

Because of these limitations most persons with cancer in the West Bank and Gaza are referred to Israel. One example of the disparity in cancer therapy and outcomes is that most women with breast cancer remaining in Gaza for their care have mastectomies because of the inability to perform radiographically guided lymph node biopsies and the unavailability of radiation therapy for local tumor control after lumpectomy Five-year survival rates for breast cancer in Gaza are about 50%, compared with about 85% in the United States and Israel (including women referred to East Jerusalem).10 Part of this disparity is explained by a later stage at diagnosis, but limited therapeutic options also contribute.10

In 2008, Norway funded a 6-year program supporting the development of a comprehensive cancer center for children and adults at August-Victoria Hospital in East Jerusalem. Despite substantial progress, the center is not comprehensive, needing more beds, space, and qualified staff including cancer experts. A computed tomography–positron-emission tomography machine was recently provided by the European Union, but there is no nuclear medicine specialist in the Palestinian territories. Hematopoietic cell transplants are not done in any hospital in the Palestinian territories; persons needing such care are sent to Israel and Jordan.

Cancer is the second-leading cause of death in the Palestinian territories, exceeded only by heart disease.
— Robert Peter Gale, MD, PhD, DSc(hc), and Khalid Halahleh, MD

In 2013, the first radiation oncology service in the Palestinian territories opened in the August-Victoria Hospital. There are now three linear accelerators in the Palestinian territories; keeping them functioning optimally is challenging. Upgrading radiation oncology capabilities is complex because of fiscal constraints and regional complexities. Palestinians requiring radiation therapy are admitted to Israeli hospitals more quickly and hospitalized longer than Israeli citizens because of concerns over patients’ access to protracted therapy schedules.

In 2005, the Palestinian Oncology Society was established with 45 members, including oncologists, hematologists, general surgeons, and pathologists. The society holds meetings every third year and one hematology symposium in 2012. A few training workshops in cancer care were organized by universities. More conferences are planned, but it is difficult to secure foreign speakers due to fiscal and political reasons.

In 1996, the Palestinian Ministry of Health established a Cancer Registry covering the West Bank and Gaza. The registry is population-based; its main goal is to collect data on new cancers and identify trends. However, lack of accurate data and incomplete reporting hamper this effort, as does geographic and political separation of the West Bank and Gaza. The Palestinian Cancer Registry reports increasing crude cancer rates recently, but this may, at least in part, reflect more complete reporting along with an aging population.

The shortage of cancer specialists in the Palestinian territories is acute. There are only 1 radiation oncologist and 2 medical oncologists per 100,000 population, about one‑half the rate in the United States and the European Union.
— Robert Peter Gale, MD, PhD, DSc(hc), and Khalid Halahleh, MD

The Cancer Registry reported a 2005 crude incidence rate of 49 per 100,000 in the West Bank and 33 in Gaza in 2005, a disparity that likely results from a younger age distribution in Gaza and more complete reporting in the West Bank.11,12 The crude cancer rate in the Palestinian territories is about one-sixth of that in the United States and the European Union. There are several possible explanations, including vast underreporting, incomplete ascertainment, and a younger population.

The median age at diagnosis for all cancers in the Palestinian territories is 55 years: 60 years in men and 51 years in women. This is substantially younger than the median age of 66 years in the United States. New cancers doubled from 2,189 in 2013 to 3,927 in 2015. Much of this increase probably reflects improved ascertainment. About one-half of new cancers were in women.13-16 The top 10 cancer sites are shown in Figure 1.

Only about 30% of new cancers in the Palestinian territories are in persons older than age 65. Sixty percent were in persons between 15 and 64 years, and 10% were in children younger than age 15. The three most common cancers in children are leukemias (30%), brain and other central nervous system cancers (20%), and lymphomas (14%).

Prevention is essential of cancer control efforts. Unfortunately, there is no effective national program addressing preventable cancer risks in the Palestinian territories. Smoking remains a major public health problem, with smoking rates among the highest in the world. There is some progress in combating smoking: The Ministry of Health has adopted strategies provided under the Framework Convention on Tobacco Control, including an antismoking law with a comprehensive ban on promotion of tobacco products and prominent health warnings on all tobacco products.

Recently, taxes on tobacco products were increased. However, there are no convincing data that any of these interventions is yet effective in decreasing tobacco exposures, and there are no smoking cessation clinics.

Palestinians are increasingly adopting a Western lifestyle, including consuming processed food and decreasing physical activity. Thirty-eight percent of Palestinians between the ages of 18 and 64 are overweight and 24% are obese, rates similar or higher than in Western countries.17 There is no organized program for cervical cancer screening, no human papillomavirus vaccination in young persons, nor a program addressing excess alcohol consumption. Decreasing environmental exposures is another important but unmet need, especially in Gaza.

In the Palestinian territories, cancers amenable to early detection are being diagnosed at later stages than in developed countries. The only active screening program is for breast cancer. The Palestinian Breast Cancer Program is a national program with a mobile mammography unit and centralized film reading. Mammograms are free for women older than age 40 and for younger women at high risk. The program is modestly successful but needs considerable improvement. There are, of course, fiscal constraints, but a major challenge is public education to overcome the cultural barriers to mammography, especially in Gaza. There are no organized programs for colorectal, prostate, or lung cancer screening.

Palliative care is an emerging specialty in the Palestinian territories, with no organized national program. There are several small nonprofit organizations whose efforts are limited for several reasons including fiscal constraints. There is an urgent need for a comprehensive palliative care platform of hospital and home-based care, as well as psychosocial programs and integrated research. Studies of complementary medicine indicate wide use of herbs, acupuncture, nonherbal nutritional supplements, as well as mind-body and physical therapies.8

Cancer burden in the Palestinian territories is expected to increase, reaching levels that further challenge the health-care system. Fiscal and political uncertainty exacerbates this problem. The cost of the many recently approved cancer drugs, cell therapies, advanced radiation therapy, and surgical techniques will create significant challenges for the government insurance system. There is a need for politicians, policymakers, foreign governments, and nongovernmental organizations to develop strategies addressing these issues. Stakeholders should collaborate in planning for an era of personalized cancer care.

Shortages in cancer specialists, qualified nursing staff and paramedical personnel, as well as unstructured training programs are challenges to improving cancer care in the Palestinian territories. Strengthening current training programs through partnerships with international organizations as well as medical and nursing schools regionally and overseas may help address these limitations.

A major consideration, intentionally outside of this review, is resolution of the current political conflict over the ultimate fate of the Palestinian territories. More than any intervention we discuss, a satisfactory resolution will have the greatest impact on improving cancer care for most Palestinians.

In the interim, physicians in the Palestinian territories, Israel, neighboring Arab countries, and globally should do all possible to improve cancer care for people living in the Palestinian territories. How? One relatively easy suggestion for those from North America and the European Union visiting Israel is to contact the Palestinian Oncology Society and offer to lecture in their area of cancer expertise in the West Bank and Gaza. This would create a constant stream of hematology and oncology ambassadors! ■

Dr. Gale is Visiting Professor of Hematology at the Haematology Research Centre, Division of Experimental Medicine, Department of Medicine, Imperial College London. Dr. Halahleh is a consultant and medical oncologist (hematology and bone marrow transplantation) in the Department of Internal Medicine at the King Hussein Cancer Center, Amman, Jordan.

DISCLOSURE: Dr. Gale is a part-time employee of, has stock or other ownership interest in, and has received travel, accommodations, or expenses from Celgene Corp. Dr. Halahleh reported no conflicts of interest.

4. The World Bank: The World Bank in West Bank and Gaza. Available at www.worldbank.org/en/country/westbankandgaza. Accessed October 8, 2018.