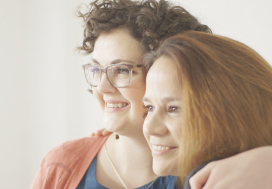 “I realized I just couldn’t wait for a new treatment option,” a determined Breelyn Wilky, MD, says, staring into the camera. “I had to find one.”

If you missed the debut of the “Breakthroughs Save Lives” video during the 2018 ASCO Annual Meeting, look for it on television and the Internet as part of a national awareness campaign recently launched by ASCO’s Conquer Cancer Foundation.

Highlighting the importance of research funding, the video showcases the powerful story of how Dr. Wilky, a 2012 Young Investigator Award (YIA) recipient, used a YIA to launch a research career that led to a life-saving clinical trial. The first patient to enroll in the trial, Brittany Sullivan, lends a survivor’s perspective to the campaign.

“I needed a treatment that didn’t exist,” shares Ms. Sullivan. “Conquer Cancer funded the doctor who saved my life.”

“Brittany was really the breakthrough moment for me,” shares Dr. Wilky. “That’s what is so important about Conquer Cancer. They believed in me as a researcher.”