Moffitt Cancer Center has made a lasting commitment to the prevention and cure of cancer, working fervently in the areas of patient care, research, and education to advance further in fighting this disease, according to Alan F. List, MD, Moffitt’s President and Chief Executive Officer. Dr. List, along with Louis Harrison, MD, FASTRO, Moffitt’s Deputy Physician in Chief, and other leaders from the Moffitt Cancer Center convened recently in New York at a reception to discuss some of the pioneering research being done at their institution.

Dr. List noted that for nearly 30 years, Moffitt Cancer Center’s mission has been to contribute to the prevention and cure of cancer. He introduced Frederick L. Locke, MD, Vice Chair in Moffitt’s Department of Blood & Marrow Transplant and Cellular Immunotherapy, who spoke about his work as a physician and translational investigator specializing in the treatment of lymphoma and multiple myeloma. Dr. Locke’s research focuses on developing strategies to promote T-cell responses against tumor-associated antigens, and he is the principal investigator for multiple cellular immunotherapy trials, including chimeric antigen receptor (CAR) T-cell therapy.

The evening was hosted by Olympic champion and cancer survivor, Scott Hamilton. Mr. Hamilton is also founder of Scott Hamilton CARES Foundation and a Member of the Moffitt Board of Advisors.

Watch future issues of The ASCO Post for in-depth conversations with Dr. Locke about his work in CAR T-cell therapy and with Scott Hamilton about his own experiences with cancer. ■ 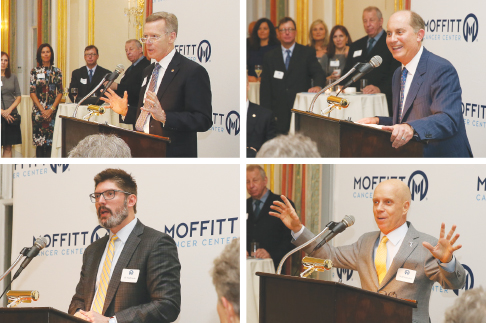