Abiraterone or Docetaxel: Which Is Optimal for Hormone-Sensitive High-Risk Prostate Cancer?

ABIRATERONE ACETATE (Zytiga) plus prednisone and docetaxel have moved up from the castrate-resistant metastatic setting to earlier in the course of disease as treatment of high-risk hormone-sensitive prostate cancer in men who are initiating androgen-deprivation therapy, based on level 1 evidence from phase III trials.1-5

Clinicians have the option of adding either abiraterone acetate plus prednisone or docetaxel at the time that androgen deprivation therapy is started. No randomized trials, however, have directly compared these agents, and evidence has been lacking for a benefit of one over the other.

At the European Society for Medical Oncology (ESMO) 2017 Congress, two presentations shed light on the pluses and minuses of abiraterone acetate plus prednisone vs docetaxel in men with high-risk prostate cancer starting long-term androgen-deprivation therapy.

“Strong evidence favors abiraterone acetate plus prednisone for early events, weak evidence is there for metastatic-free survival, and there is no evidence of a difference in symptomatic skeletal events or cause-specific survival.”
— Matthew Sydes, MSc

One presentation compared abiraterone acetate plus prednisone vs docetaxel of the multiarmed, multilevel STAMPEDE trial.6 (STAMPEDE is a platform protocol designed to investigate new treatments vs standard of care in patients with high-risk prostate cancer.) Although not directly compared in STAMPEDE, an analysis of patients treated with either abiraterone acetate plus prednisone vs standard of care or docetaxel vs standard of care in two different STAMPEDE comparisons suggests that both drugs could be used upfront along with androgen-deprivation therapy to treat hormone-sensitive advanced or metastatic high-risk prostate cancer. Although there was no difference in overall survival between these agents, abiraterone acetate plus prednisone had some advantages over docetaxel in preventing disease progression.

A second presentation was a review and meta-analysis of recent randomized trials,7 again showing that either agent could be used, with some guidance as to treatment expectations of both agents. 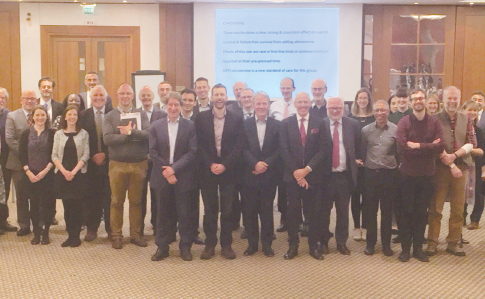 “We have already presented the survival advantage of docetaxel vs standard of care in 2015. More recently, we showed the survival advantage of adding abiraterone acetate and prednisone over the same standard of care. Both treatments show an overall survival advantage in this setting. While we don’t have data about using them both, we think you will have to make a choice. Oncologists and urologists want to know which combination is preferable, which is why we conducted this analysis, using the only directly randomized data available,” Mr. Sydes told the audience.

There was no statistically significant difference between the abiraterone acetate and docetaxel arms in overall survival (hazard ratio [HR] = 1.16). About 25% of each arm died over the follow-up period.

CHOOSING BETWEEN DOCETAXEL AND ABIRATERONE

When choosing between docetaxel and abiraterone in the initiation of hormone therapy in hormone-sensitive high-risk prostate cancer, consider the following:

For the early outcome measures of failure-free and progression-free survival, estimates favored abiraterone acetate plus prednisone, with hazard ratios of 0.51 and 0.65, respectively. Additionally, the estimates of late outcome measures of freedom from metastatic disease progression and freedom from symptomatic skeletal events favored abiraterone acetate plus prednisone, but the differences between treatment groups were not statistically significant (HR = 0.77 and 0.83, respectively).

Mr. Sydes said that at 1 year and at 2 years, about one in nine patients in both arms reported severe toxicity.

“This comparison is underpowered, but it offers the only data we have to directly compare docetaxel and abiraterone in this setting,” he stated. “We could only make this head-to-head comparison because of the platform nature of the STAMPEDE protocol.”

The strengths of this analysis are that it relies on patients directly randomized to either treatment vs standard of care, and data were prospectively collected. “Strong evidence favors abiraterone acetate plus prednisone for early events, weak evidence is there for metastatic-free survival, and there is no evidence of a difference in symptomatic skeletal events or cause-specific survival,” he said.

The toxicity profiles of the two drugs are different, and this will factor into the choice.

A RELATED PRESENTATION attempted to sort out the optimal systemic treatments for men with metastatic hormone-sensitive prostate cancer. The STOPCaP (Systemic Treatment Options for Cancer of the Prostate) review and meta-analysis was based on 6 separate randomized trials that included more than 6,000 men and that compared androgen-deprivation therapy alone or in combination with the following treatments either alone or in combination: celecoxib, zoledronic acid, docetaxel, or abiraterone acetate plus prednisone.

Using sophisticated methods of comparing these treatments, the authors looked at overall survival as the primary endpoint and failure-free survival as the secondary endpoint. They noted that definitions of failure varied among the trials.

In the absence of head-to-head comparisons of these treatments, “our network analysis is the only way to get a sense of the relative effects of these treatments. We showed there are two treatment options that offer survival benefit to men with hormone-sensitive prostate cancer. Although the results point toward androgen-deprivation therapy plus abiraterone acetate plus prednisone being more effective than androgen-deprivation therapy plus docetaxel, the magnitude of benefit—particularly with respect to overall survival—is not yet fully resolved,” Dr. Vale said.

“Results of failure-free survival should be interpreted cautiously, because there was some variation in the definition,” Dr. Vale noted.

DURING A DISCUSSION of Dr. Vale’s poster, Stéphane Oudard, MD, Professor of Oncology and Chief of the Oncology Clinical and Translational Research Unit at Georges Pompidou Hospital in Paris, France, said that although newer treatments have improved survival, there are...

FORMAL DISCUSSANT of the STAMPEDE trial, Cora Sternberg, MD, Chief of the Department of Medical Oncology, San Camillo Forlanini Hospital, Rome, commended the study design. “This multiarm, multistage design is very innovative. The investigators plan up to 10 trials over 20...