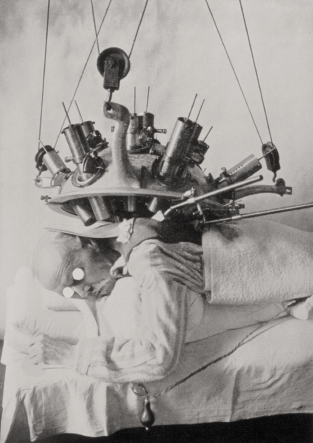 Photo courtesy of Stanley B. Burns, MD, and the Burns Archive.

Devices to accurately deliver high-dose radium therapy became extremely sophisticated during the late 1920s. In this photograph, the patient is being treated for a carcinoma of the back by a Sluys-Kessler machine. This apparatus could also accurately deliver therapy for a wide variety of internal tumors, including larynx, pharynx, breast, esophagus, and brain.

The machine is suspended from the ceiling and manipulated by a series of cable and pulley arrangements that allowed the large hemisphere to be angled in any direction. The hemisphere was composed of 13 radium “cannons,” each consisting of a bronze cylinder containing radium and encased in a lead tube. The angle of the tubes could also be adjusted within their holders and aimed directly at the lesion. A caliper attached to a clamp held the cylinder in the lead shield tube and could also further adjust the beam. During treatment, a special lead shield was placed over the patient with the treatment area open to the radiation beam. The tubes were set about 6 to 8 cm from the skin. The charge in this case was 100 mg per canon. ■