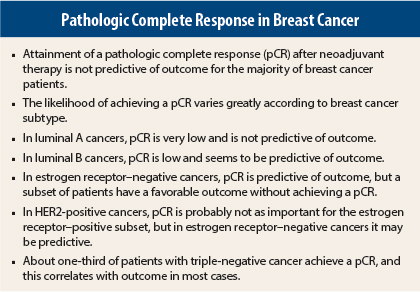 It’s complicated, but pathologic complete response is not predictive of outcome for the majority of breast cancers.

There are patients who achieve a pCR who still have recurrences, and many others who don’t achieve a pCR and still do well long-term.

In the neoadjuvant treatment of breast cancer, the importance of achieving a pathologic complete response (pCR) varies substantially by breast cancer subtype. Patients are increasingly interested in this outcome, but it means different things to different patients, according to two breast cancer specialists from Emory University, who discussed the meaning of pCR at the Debates and Didactics in Hematology and Oncology meeting in Sea Island, Georgia.

Amelia B. Zelnak, MD, Assistant Professor of Hematology and Medical Oncology at Emory, added, “As we use more and more neoadjuvant therapy, our patients are really attuned to how the treatment is working. We need to be careful about how we discuss this with them. There are patients who achieve a pCR who still have recurrences, and many others who don’t achieve a pCR and still do well
long-term.”

Dr. Zelnak noted that the early preoperative trials—especially National Surgical Adjuvant Breast and Bowel Project (NSABP) B-18 and B-27—showed that patients achieving a pathologic complete response had better long-term outcomes, but these early data were not broken down by HER2 or hormone receptor status, and were conducted before intrinsic subtyping entered the picture.

Since that time, the issue of pathologic complete response—who achieves it, what it means—has become infinitely more nuanced.

Likelihood of Achieving a pCR

The recent meta-analysis by Cortazar et al illustrates the huge variability in pathologic complete response by breast cancer subtype.1 In general, hormone receptor–positive cancers (luminal A and B) have the least chance of a pCR after neoadjuvant chemotherapy, especially if they are low-grade. HER2-positive cancers have a better chance, especially the hormone receptor–negative subset, and approximately one-third of patients with triple-negative breast cancer achieve pCR.

“The point is, if we really believe that pCR is the gold standard for outcome, we have a lot of patients who, unfortunately, don’t achieve it,” Dr. O’Regan commented.

Estrogen receptor–positive cancers are the least responsive to neoadjuvant chemotherapy and need alternative treatments in the preoperative setting. “We are struggling with how to downstage these cancers,” Dr. O’Regan added.

The fact that two-thirds or more of patients did respond indicates that downstaging is occurring. However, 80% of patients did not achieve a pathologic complete response, she emphasized. “If pCR is important in estrogen receptor–positive cancer, these patients need a different approach,” she suggested.

Cortazar’s meta-analysis of almost 12,000 patients in a dozen neoadjuvant studies concluded that patients who attain a pathologic complete response have improved event-free survival.1 With the attainment of pCR, defined by ypT0/is ypN0 (ie, absence of invasive cancer in the breast or nodes; ductal carcinoma in situ allowed), events were reduced by 52% (hazard ratio [HR] = 0.48). However, some associations between pCR and long-term outcomes were far stronger than others. Hazard ratios for event-free survival were greatest for patients with triple-negative cancers (HR = 0.24), of whom 34% achieved a pathologic complete response, and for patients with HER2-positive, hormone receptor–negative disease receiving trastuzumab (Herceptin, HR = 0.25). In estrogen receptor–positive tumors, grade was also important. The pCR rate for low-grade tumors was only 7%, whereas it was 16% for grade 3 tumors.

The German Breast Group also looked in detail at pCR and disease-free survival by intrinsic subgroup and showed no impact of pCR in the luminal A group or among luminal B cancers that are HER2-positive.3 The achievement of pCR was predictive in the three other subsets: luminal B HER2-negative, HER2-positive/estrogen receptor–negative, and triple-negative.

“Overall, pCR is a surrogate marker for outcome in breast cancer but this varies according to the breast cancer subtype. In particular, pCR is not a good marker in low-grade [estrogen receptor]–positive disease,” Dr. O’Regan emphasized.

The U.S. Food and Drug Administration (FDA) used the findings from Cortazar’s meta-analysis to support the approval of pertuzumab (Perjeta) in the neoadjuvant setting. The neoadjuvant NeoSphere trial had shown a 46% pathologic complete response rate among patients receiving pertuzumab in addition to docetaxel and trastuzumab,4 and in TRYPHAENA, pertuzumab plus trastuzumab given with chemotherapy produced pCRs in 81% of hormone receptor–negative patients and 47% of hormone receptor–positive ones.5 Approval of the drug was further bolstered by data from the metastatic setting in CLEOPATRA, where pertuzumab added to trastuzumab and docetaxel improved not only response rates and progression-free survival, but also overall survival (HR = 0.66, P = .0008),6 Dr. Zelnak noted.

The adjuvant APHINITY trial should elucidate the association between pathologic complete response and long-term outcomes. “We are optimistic that APHINITY will confirm long-term improvements in outcomes with pertuzumab,” Dr. Zelnak said. “However, we felt more comfortable with this before we saw the data from ALTTO.”

“For HER2-positive disease, we think the truth is in the big trials,” Dr. O’Regan said. For this reason, ALTTO was met with disappointment.

In NeoALTTO, the addition of lapatinib (Tykerb) to trastuzumab resulted in a pathologic complete response rate of 51%, vs 30% with trastuzumab alone and 25% with lapatinib; the highest pCR rate, 61%, was obtained with dual blockade among the hormone receptor–negative subset.7 At 3 years, events were reduced by 62% among patients achieving a pCR vs not (P = .0003), and survival was also significantly improved (P = .005).

“The suggestion, again, was that pCR is more predictive of outcome in hormone receptor–negative cancers, and these patients may do better with the combination of two anti-HER2 agents,” Dr. O’Regan observed. “This was very exciting. We were hopeful it would translate into a meaningful difference in the adjuvant setting.”

ALTTO, however, failed to confirm the benefit of dual anti-HER2 blockade, which Dr. O’Regan attributed, in part, to the population being at lower risk (40% node-negative, 60% hormone receptor–positive) than those in NeoALTTO or in the pivotal adjuvant trastuzumab trials.8 The fact that the overall 4-year disease-free survival rate approached 90% in all arms indicated these were relatively good-prognosis patients, she added.

“NeoALTTO did not translate into differences in the adjuvant setting, for whatever reason, and this begs the question of whether we rushed into using pCR as a surrogate for long-term outcomes.… I think we should have been more reticent about hormone receptor status,” Dr. O’Regan suggested.

Dr. Zelnak indicated that the FDA considered “the body of evidence” in the case of pertuzumab, and rather than universally embrace pCR as a surrogate endpoint for long-term outcomes, the FDA is more likely to evaluate drugs on a case-by-case basis.

Carey et al recently reported that in hormone receptor–positive tumors, nearly 50% are luminal B, 34% are luminal A, and 17% are the HER2 intrinsic subtype.9 Luminal A tumors do not derive much benefit from chemotherapy, and pCRs in this subgroup are not very predictive of outcomes. “Being one-third of HER2-positive, hormone receptor–positive tumors, are the luminal A tumors driving pCR rates down in this group?” Dr. O’Regan asked.

“These findings suggest that the triple-positive cancers perhaps need to be treated differently,” she said, “and there may be many who can get by with less treatment.”

An emerging question, according to Dr. Zelnak, is whether carboplatin should be added to the neoadjuvant regimens for triple-negative tumors. In CALGB 40603, the addition of carboplatin to paclitaxel produced a 60% pCR rate, vs 46% without carboplatin,—an increase of 76% with carboplatin on board (P = .0018).11 However, she noted, “in contrast to pertuzumab, carboplatin clearly does add toxicity, and we don’t have evidence of a survival advantage for adding carboplatin in the metastatic setting.”

In conclusion, Drs. O’Regan and Zelnak emphasized that pathologic complete response is predictive of long-term outcomes only in subsets of early breast cancer, primarily triple-negative and HER2-positive/hormone receptor–negative patients. Especially in patients with low-grade estrogen receptor–positive tumors, it is not predictive. For patients in whom pCR is important, but is not achieved, more aggressive therapy and/or a clinical trial are warranted.

Finally, clinicians and patients should not consider pathologic complete response the be-all and end-all for treatment outcomes. “You can’t really look just at pCR,” Dr. Zelnak said, “as the final indication for how patients will do.” ■

Disclosure: Dr. O’Regan is a consultant for and received research support from Novartis and Genentech/Roche. Dr. Zelnak reported no potential conflicts of interest.