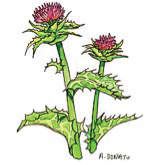 The ASCO Post’s Integrative Oncology series is intended to facilitate the availability of evidence-based information on integrative and complementary therapies commonly used by patients with cancer. We chose milk thistle for this issue because of its growing popularity among cancer patients.

Milk thistle is a flowering herb native to the Mediterranean regions of Europe, Africa, and the Middle East. It also grows in many other warm climates of the world. Because it produces bright purple colored flowers, it is considered an ornamental plant.

Despite that designation, the medicinal history of milk thistle dates back more than 2,000 years. It was used as a remedy for disorders of the liver, biliary tract, and kidney. The leaves, stalks, and flowering heads of the plant were consumed as food. Today, milk thistle supplements are commonly used in many European countries to help manage liver diseases.

Silymarin, the biologically active mixture of flavonoids isolated from milk thistle seeds, has been the focus of research over recent decades. Data from clinical trials show that silymarin is useful for the treatment of alcohol-induced liver disease and for reducing liver toxicity associated with chemotherapy. Silymarin was also found to be an effective antidote to Amanita phalloides, the deathcap mushroom, which is known to cause serious liver damage.

Milk thistle is available in the form of capsules, liquid extracts, and tinctures. The products are often standardized to contain 70% to 80%
silymarin.

Preclinical studies indicate that flavonoids in milk thistle have antioxidant and anticancer effects1,2 and may protect against Alzheimer’s disease.3

Data from randomized clinical trials show that silymarin can reduce aminotransferases in alcoholic liver disease,4 and conclusions from a systematic review suggest that it helps treat liver cirrhosis.5 Silibinin, a constituent of silymarin, reduced liver toxicity associated with chemotherapy in children with acute lymphoblastic leukemia.6

A case study indicates the utility of intravenous silibinin in patients co-infected with human immunodeficiency virus and hepatitis C virus.7 However, studies in other types of hepatic disease are flawed.8,9

One of the mechanisms underlying the hepatoprotective effects of silymarin is via downregulation of extracellular matrix proteins such as collagen.10

Silymarin supplementation may also play a role in improving the glycemic profile in patients with type 2 diabetes.11

A 25-year-old man developed a severe case of epistaxis, believed to have been due to self-medication with aspirin, garlic, and milk thistle.14

At high doses, silibinin can elevate bilirubin and liver enzymes.15

Cytochrome P450 3A4 substrates: Milk thistle inhibits cytochrome P450 and can affect the intracellular concentration of drugs metabolized by this enzyme.16 However, conflicting data indicate no such effects.17-19

UGT (Uridine 5´-diphospho-glucuronosyltransferase) substrates: Milk thistle modulates UGT enzymes in vitro and can increase the side effects of drugs metabolized by them.20 n