Managing Resistance to Targeted Agents: The Future of NSCLC Therapy 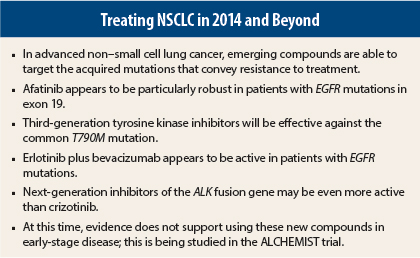 Treating NSCLC in 2014 and Beyond

The fact that we now have two compounds, and several others in the pipeline, for a translocation recognized only 7 years ago in lung cancer is truly amazing.

The bane of treating non–small cell lung cancer (NSCLC) patients with druggable mutations has been the development of resistance to targeted agents. New compounds are meeting the challenge of treating resistant disease, according to Fadlo R. Khuri, MD, FACP, Professor and Chair of Hematology and Medical Oncology, and Deputy Director of the Winship Cancer Institute of Emory University, Atlanta. Dr. Khuri is also the Roberto C. Goizueta Distinguished Chair in Cancer Research at Emory.

“The bottom line is that this is a new era in lung cancer, not just for research but for treatment,” Dr. Khuri said in an interview with The ASCO Post.

At the Debates and Didactics in Hematology and Oncology meeting in Sea Island, Georgia, and in a follow-up interview, Dr. Khuri described the emerging treatment landscape for NSCLC patients with the epidermal growth factor receptor (EGFR) mutation or the ALK fusion oncogene.

The successful targeting of the EGFR mutation with an EGFR inhibitor was initially proven a half-dozen years ago in the IPASS study1 and has been replicated many times over with gefitinib and erlotinib. These early studies indicated that “phenotype is no substitute for genotype,” as patients with EGFR mutations responded to EGFR inhibitors while patients with wild-type EGFR fared better with chemotherapy. The latest research on EGFR inhibitors suggests that targeting may actually be not just mutation-specific, but exon-specific.

Analysis of outcomes according to the patient’s specific EGFR mutation revealed that “not all EGFR mutations are created equal,” Dr. Khuri indicated. For those with the common exon 19 deletion and the exon 21 point mutation L858R (n = 308), median progression-free survival was even longer: 13.6 months for afatinib and 6.9 months for chemotherapy (HR = 0.47, P = .001).

“Afatinib may prove to be a drug that we strongly consider for front-line treatment in the patient with a specific exon 19 mutation,” he predicted. The exon-specific activity of erlotinib and gefitinib is not yet known.

The next generation of EGFR inhibitors will target the T790M mutation, an acquired exon 20 mutation found in approximately half of the tumors that develop secondary resistance to tyrosine kinase inhibitors.4 These exciting novel compounds are more active, and safer, than the current arsenal.

“Consistent with the preclinical data, the deepest and most durable responses with this drug are seen in patients with T790M mutations,” he said.

The newer agents are also better tolerated. The regimen of afatinib plus cetuximab, which has also shown activity in patients with resistant disease, is associated with substantially higher rates of diarrhea and rash than any of the novel EGFR inhibitors in development. Rash is observed in fewer than 5% of patients treated with CO1686, though there is a tendency for prolongation of the QTc interval, “which could be of concern” with this compound, he added. This drug also causes hyperglycemia in nearly 50% of patients.

In general, these third-generation EGFR inhibitors are “making tremendous strides” in T790M-mutated tumors and could be granted accelerated approval for this subset of patients, he predicted.

Interestingly, activity was also recently observed for erlotinib plus bevacizumab (Avastin), in a study reported at ASCO 2014 by Japanese investigators.6 JO25567 randomly assigned 150 chemotherapy-naive EGFR mutation–positive patients to erlotinib alone or with bevacizumab, and showed a 6.3-month improvement in progression-free survival with the combination (HR = 0.54, P = .0015).

“This was an impressive study. We clearly see that patients with EGFR mutations randomized to this combination had a striking difference in progression-free survival of more than 6 months, and (absent crossovers in the trial) we could eventually see a difference in overall survival,” he said.

This appears to be the first adequately powered evaluation of erlotinib/bevacizumab specifically in patients with EGFR mutations.

The ALK fusion gene is present in about 5% of NSCLC cases, and is successfully targeted by crizotinib (Xalkori). Next-generation ALK inhibitors will likely improve upon successes achieved with this drug—specifically, the new agents will be able to overcome resistance due to certain gatekeeper mutations acquired following crizotinib exposure.

“The fact that we now have two compounds, and several others in the pipeline, for a translocation recognized only 7 years ago in lung cancer is truly amazing,” Dr. Khuri commented.

Crizotinib was associated with a doubling in progression-free survival, vs chemotherapy, in ALK-positive patients in the pivotal second-line trial and was quickly approved for this subset of patients.7 In the first-line setting, the final analysis of PROFILE 1014 showed that crizotinib improved progression-free survival from 7.0 months to 10.9 months (HR = 0.45, P < .0001), and responses were rapid and durable.8 With 68% of patients still in follow-up, median overall survival has not been reached in either arm.

The second-generation ALK inhibitor ceritinib (Zykadia) may prove to be even more potent in this setting. The drug is highly active, even in patients previously treated with crizotinib, Dr. Khuri indicated.

In the ASCEND-1 trial of 228 ALK-positive patients, median change from baseline was 46% with ceritinib treatment.9 The progression-free survival rate at 12 months was 61.3% in ALK inhibitor–naive patients, 39.1% for all patients, and 28.4% in previously treated patients.

“Ceritinib seems, preclinically, to be more potent than crizotinib. Clinically, the median progression-free survival exceeds 12 months [not reached in the study], which is better than originally reported for crizotinib in treatment-naive patients,” he noted. “From my perspective, this drug looks very active.”

Dr. Khuri said he is further encouraged by data for two other novel ALK inhibitors in development: AP26113 and alectinib. AP26113 is active in both ALK-positive and EGFR-mutated patients; it could be beneficial in either subset or in the small group (< 5%) of patients harboring both mutations. In a study reported at ASCO 2014, responses to AP26113 were observed in 75% of all 57 ALK-positive patients and in 69% of those previously treated with crizotinib.10 Alectinib was evaluated in 47 patients, 70% of whom received at least two prior regimens, with responses observed in 60%.11

Under the promise of these newer ALK inhibitors, the future treatment paradigm for advanced-stage ALK-positive NSCLC will include testing for sensitive gatekeeper mutations and treating accordingly, he said.

Dr. Khuri emphasized personalization of care by histology, use of molecular markers in the first-line setting (with EGFR and ALK testing being critical), use of maintenance therapy (switch, or continued pemetrexed or erlotinib), and as trials confirm their benefit, the incorporation of next-generation EGFR and ALK inhibitors.

Adjuvant Use? Not Yet

Despite the potential for these new agents in advanced disease, Dr. Khuri cautioned that they are not ready for adjuvant use. “We have very compelling evidence that chemotherapy in the adjuvant setting (for stage IB, IIA, IIB, and III tumors) improves overall survival and increases cure rate,” he said. “We have only inferential data about targeted therapies in that setting, and we can’t be sure they don’t cause harm. While I am not being a treatment nihilist, I think the bar has to be set higher for early-stage disease.”

“What we do know,” he continued, “is that if a patient with an EGFR or ALK mutation [has a disease recurrence], we can induce a durable partial remission with the relevant targeted agent. We need further proof that we can impact overall survival before we take these agents into the adjuvant setting.”

The benefit of targeted agents in early-stage disease will be evaluated in the ALCHEMIST (Adjuvant Lung Cancer Enrichment Marker Identification and Sequencing Trials) group of clinical trials. After surgery, tumor specimens will be screened for EGFR mutations and ALK fusion genes, and patients with abnormalities will be randomly assigned in treatment trials to erlotinib or crizotinib vs placebo, given for up to 2 years after standard therapy. Patients lacking mutations in these genes will be monitored for 5 years.

“ALCHEMIST is very important, and it’s why clinicians should not be treating early-stage patients off protocol with targeted agents,” he said. “If in these prospective trials we find an advantage in terms of progression-free survival, then I would be more comfortable using targeted agents for early-stage disease.” ■