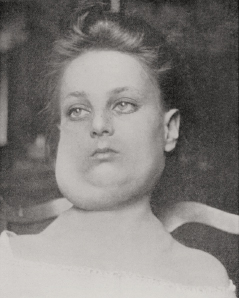 Photos courtesy of Stanley B. Burns, MD, and the Burns Archive. 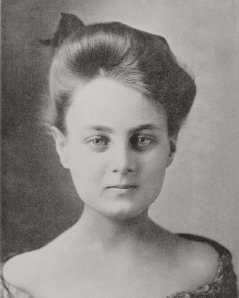 Photos courtesy of Stanley B. Burns, MD, and the Burns Archive.

One of the miracles produced by the x-ray was the relatively easy treatment of inoperable or disfiguring tumors. If not a cure, the results frequently gave the patients at least some time to look and feel normal. The young patient shown in these photographs had a remarkable response. Images such as these were used by professionals to document the dramatic results possible through the use of radiation treatments for a variety of diseases. Francis H. Williams, MD, reports this case in his 1903, The Roentgen Rays in Medicine and Surgery: as an aid in Diagnosis and as a Therapeutic Agent:

The first case, still under treatment, is that of a girl, 12 years of age, who had a growth of 7 years’ duration. Two operations had been done for the removal of large masses of glands in the neck, one by Dr. G.W. Grey and the other by Dr. M.W. Richardson, before she came to me for treatment by the x-rays.

The microscopical examination made after the first operation showed that the growth was a lympho-sarcoma, and that after the second it was a round-celled carcinoma. The growth involved the glands of the neck, both axillae, groin, and thorax. The accompanying (photograph) shows how great was the enlargement of the glands in the neck: Those in the other portions mentioned were also very greatly enlarged.

Treatment was begun in May 1902, and during the first three weeks the glands became softer and smaller, and the patient’s well being was much improved. She was weak and listless at the beginning of the treatment, but became bright and active after the lapse of 3 or 4 weeks. Exposures have been given once or twice a week, as a rule, during 10 months. During the seventh month of treatment the spleen became enormously large, extending to the right of the umbilicus and nearly down to the iliac crest, but after x-ray exposure it steadily diminished in size; the weight of the patient has constantly increased. ■