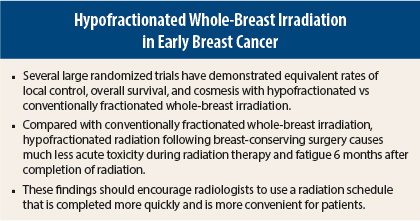 Hypofractionated whole-breast irradiation was associated with much less acute toxicity during radiation therapy compared with conventionally fractionated whole-breast irradiation and also led to improved physical well-being and less physician-reported and patient-reported fatigue 6 months later, according to results of a randomized controlled trial. This is one of the first trials to compare these treatments in patients given contemporary radiation therapy with a tumor bed boost.

“But none of these trials mandated a tumor bed boost, which is widely used in the United States and Europe and reflects contemporary treatment,” she said.

The primary objective of the present trial was cosmesis at 3 years; secondary endpoints included maximal acute toxicities and quality of life assessed by the FACT-B questionnaire, which includes fatigue, nausea, caring for family, pain, and feelings of distress.

Of 432 patients screened, 287 were randomly assigned. Patients were excluded if they had a history of breast cancer, concurrent bilateral breast cancer, or were pregnant. They were assessed for acute toxicity during radiation treatment and then followed for 6 months.

Prior to starting treatment, 91% in the conventional fractionation arm and 95% in the hypofractionated arm had good to excellent cosmesis. Most of the women were between the ages of 50 and 70, 88% were postmenopausal, and 75% were overweight or obese. Three-quarters had invasive breast cancer; 25% were grade 3; the majority were estrogen receptor–positive and progesterone receptive–positive; and 8% were HER2-positive.

At 6 months after completion of radiation, patients randomly assigned to hypofractionated whole-breast irradiation showed a strong trend toward better physical well-being on FACT-B scoring than those treated with conventionally fractionated whole-breast irradiation (P = .07), as well as less patient- and physician-reported fatigue (P < .001 and P = .009, respectively). ■