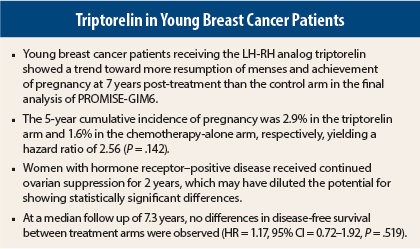 Current guidelines should consider updating recommendations for fertility preservation in this setting, adding LH-RH analogs as a widely available option.

The use of [LH-RH] agonists during chemotherapy to protect ovarian function remains controversial.

Young women with early breast cancer may be more likely to resume menses and become pregnant when treated with a luteinizing hormone–releasing hormone (LH-RH) analog (also known as a gonadotropin-releasing hormone [GnRH] analog) along with chemotherapy, according to the final follow-up of PROMISE-GIM6, a phase III multicenter trial reported at the 2014 Breast Cancer Symposium.1

“Data from PROMISE and POEMS [another recent trial] support the use of LH-RH analogs during chemotherapy as a strategy to preserve ovarian function and fertility in breast cancer patients,” said Matteo Lambertini, MD, an oncology fellow working with Dr. Del Mastro at the IRCCS AOU San Martino-IST in Genova, Italy.

Eight randomized trials and eight systematic reviews have evaluated the role of LH-RH analogs as a strategy to preserve ovarian function in breast cancer patients, with mixed results. Data on long-term outcomes is scarce, he said.

While calling the PROMISE study “impressive” in its achievement of long-term outcome data on more than 85% of its population, Hope S. Rugo, MD, Professor of Medicine and Director of the Breast Oncology Clinical Trials Program at the University of California, San Francisco, Helen Diller Family Comprehensive Cancer Center, cautioned that the data on fertility preservation remain premature. “[LH-RH] analogs,” she said, “are not a substitute for established methods.”

In the updated analysis, women in the PROMISE-GIM6 study were more than twice as likely to become pregnant over 7 years when treated with adjuvant triptorelin compared with chemotherapy alone. The fact that disease-free survival was similar confirmed the safety of the combination in cancer patients, Dr. Lambertini said.

PROMISE-GIM6 was a multicenter, open-label trial of 281 premenopausal women with early-stage breast cancer who were candidates for neoadjuvant or adjuvant chemotherapy. Eighty percent of subjects had hormone receptor–positive disease.

After a median follow-up of 7.3 years, these were the key findings:

Dr. Lambertini said that while these findings were nonsignificant trends, they support those from the recent POEMS study, reported at the 2014 ASCO Annual Meeting.3 In POEMS, hormone receptor–negative patients receiving the LH-RH agonist goserelin (Zoladex) had a lower rate of ovarian failure at 2 years (8% vs 22%) and twice the likelihood of pregnancy (adjusted odds ratio = 2.45) compared with women not receiving this drug. Unlike PROMISE, the study did not include women with hormone receptor–positive disease.

In her discussion of this paper, Dr. Rugo emphasized that fertility preservation is a factor for many of the 20,000 women of childbearing age diagnosed with breast cancer each year. “This is an important issue for oncologists and patients,” she said.

The most important risk factor for ovarian failure, she noted, is increasing age, followed by diminished ovarian reserve (which is difficult to measure). Type, dose, and schedule of chemotherapy also matter (higher doses are related to greater risk), as does the use of endocrine therapy.

Options for preserving fertility include ovarian stimulation, ie, cryopreservation of embryos and oocytes. “Ovarian stimulation is the most proven method of fertility preservation for young women with breast cancer, and with current techniques, this now takes only about 2 weeks, which is a very modest delay for most women starting chemotherapy,” she noted.

On the other hand, the use of LH-RH agonists as a means of ovarian suppression for fertility preservation has mostly been studied in small trials, with mixed results and no long-term data. This strategy has also not been met with enthusiasm by some fertility specialists, who point out that it may not be protecting the primordial follicles. Alkylating agents induce amenorrhea by affecting the resting oocyte/primordial follicles, she indicated.

In the PROMISE study, the impact of triptorelin is hard to determine, since patients whose ovarian function resumed within 1 year could receive monthly triptorelin for at least 2 years, said Dr. Rugo. Also, 93% received adjuvant endocrine therapy, 23% with tamoxifen alone and almost 70% with tamoxifen or an aromatase inhibitor plus triptorelin.

“The investigators did this because they believed that ovarian suppression was an important part of treating patients with estrogen receptor–positive disease,” she noted. Because of this design, long-term follow-up understandably showed no statistically significant difference in the resumption of menses 7 years later, she said.

There are also caveats to the findings from POEMs, which was compromised by the fact that for almost half its enrollees, long-term outcomes could not be determined, she added.

Strategies for reducing ovarian failure, she added, are hard to assess, as fertility is not the same as amenorrhea, levels of follicle-stimulating hormone are not predictive, and the desire for pregnancy is highly individualized and changes over time. Furthermore, definitions of ovarian failure vary widely, and modern treatments may be associated with lower rates than are currently estimated from older regimens, she pointed out.

In short, Dr. Rugo cautioned, “The use of [LH-RH] agonists during chemotherapy to protect ovarian function remains controversial. Given the lack of apparent risk, however, they could be considered in patients with estrogen receptor–negative disease, with a discussion of the known benefits. They are not a substitute for established methods.”