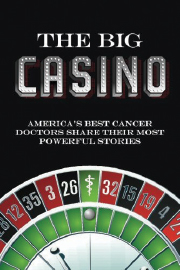 The survival of cancer varies substantially, not only based on the type of malignancy, but also on the individual patient.

The following essay by Michael Feinstein, MD, is excerpted from The Big Casino: America’s Best Cancer Doctors Share Their Most Powerful Stories, which was co-edited by Stan Winokur, MD, and Vincent Coppola and published in May 2014. The book is available on Amazon.com and thebigcasino.org.

Cancer, often referred to uneasily as “The Big C,” is a word we are brought up to dread. Cancer is associated with pain, suffering, and death. A diagnosis of cancer causes a range of emotions: shock, anger, disappointment, frustration, and, of course, fear. “Why me?” is a prevalent response. It’s normal to think about dying, but the intense fear of doing so can be debilitating. Responses differ from person to person, but the fear and the anxiety of the outcome remain.

Unfortunately, most people equate cancer with death. They don’t know that some cancers have a better prognosis than others and that some cancers do better than other diseases. The survival of cancer varies substantially, not only based on the type of malignancy, but also on the individual patient. Today, nearly 14 million people are living with cancer or have survived the disease.

Cancer is all around us—in our families, our friends, our heroes, and our enemies. What is it like to be told that you have cancer? How do people cope with the disease? An adjustment period is essential. Patients need time to reflect on what is most important in their lives. It takes time to understand the diagnosis, the treatment options, and what it means to individuals and their families. Support is critical. The days and weeks after a diagnosis is made are emotionally trying. A lot of mental energy can be used up, making it hard to take in and process all of the medical information seemingly coming from all directions.

One negative feeling may dominate and dictate. This frightful state can prevent an individual patient from moving forward in an appropriate manner. The following case demonstrates the very dramatic impact of uncontrolled fear on an individual’s life.

JS, a 60-year-old man, had mid-back pain of several months’ duration without other symptoms. He had no significant prior medical history. After a thorough evaluation by his primary care physician, he was found to have a suspicious lesion on his T12 vertebra. The location was such that it was felt to be the source of the patient’s back pain. He was referred to the Barrow Neurological Institute in Phoenix, Arizona, where a needle biopsy was taken [of the lesion] on the T12 vertebra under CT scan guidance. The biopsy was read as showing nonspecific fibrous tissue without histologic evidence of malignancy. The patient was told, or it was inferred, that he had a malignancy involving his 10th thoracic vertebra based on the CT scan result. Immediately, the patient became fixated on a fear of dying, sold his business, and rushed to get his affairs in order.

The patient was subsequently referred to me for further evaluation and recommendations for management. He was totally convinced that he had a malignant disease and that he would succumb to it in a short period of time. Based on a clinical diagnosis of malignancy, a full evaluation was carried out looking for a primary tumor. Nothing was revealed. With much coaxing on my part, a neurosurgeon carried out an open vertebral biopsy. A diagnosis of coccidiomycosis was obtained. Coccidiomycosis is a fungal infection commonly known as “Valley Fever,” which is endemic to the Southwest. An infectious disease consultation was obtained and the patient was appropriately treated with antifungal therapy.

This patient may have always feared cancer, but when fear threatened to become reality, he found himself literally vulnerable, powerless, and helpless. Although in the end the patient didn’t have cancer, this overwhelming fear led him to change his life dramatically, and, as it turned out, unnecessarily. ■

Dr. Feinstein is a medical oncologist/hematologist who served on the faculty of several medical schools, including Cornell University College of Medicine (now Weill Medical College-Cornell University) and New York University School of Medicine in New York City. Dr. Feinstein lives in Scottsdale, Arizona.  “Fear” is excerpted from The Big Casino with permission from the book’s publishers, Stan Winokur, MD, and Vincent Coppola.  Additional essays from The Big Casino will be published in future issues of The ASCO Post.