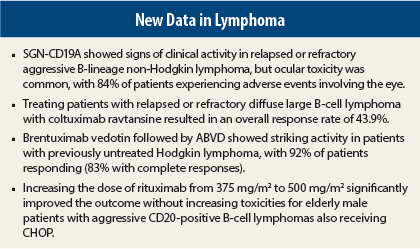 This is impressive clinical activity [seen with coltuximab ravtansine], because with relapsed/refractory aggressive B-cell lymphoma, [it] is very difficult to obtain complete response with a single agent.

Antibody-drug conjugates are being tested against several types of lymphomas and for some of these agents, “activity is quite impressive,” Andrew M. Evens, DO, MSc, reported at the recent Best of ASCO meeting in Chicago. Dr. Evens, Professor of Medicine, Chief, Division of Hematology/Oncology, and Director, Tufts Cancer Center, at Tufts Medical Center in Boston, summarized three studies involving antibody-drug conjugates, as well as several other trials originally presented at the 2014 ASCO Annual Meeting in Chicago.

Two of the antibody-drug conjugates bind to CD19, which Dr. Evens noted, “is the most widely expressed antigen in B-cell malignancies.” There are “still unmet needs” for patients with these malignancies, he said, with many not responding to salvage therapy or third-line treatment following salvage therapy.

SGN-CD19A showed evidence of clinical activity in patients with relapsed or refractory, aggressive B-lineage non-Hodgkin lymphoma, according to an interim analysis of a phase I study.1 The objective response rate was 30% (11 of 37 patients), and the complete response rate was 16% (6 patients).

All patients had at least one prior systemic regimen, and patients with diffuse large B-cell lymphoma or grade 3 follicular lymphoma must have received intensive salvage therapy. SGN-CD19A was administered intravenously on day 1 of 21-day ­cycles.

Adverse events were an issue with this study, Dr. Evens stated, with 31 patients (84%) experiencing adverse events involving the eye. “This was not just mild visual changes but keratopathy was diagnosed in several patients,” Dr. Evens said. Treatment with steroid eye drops as well as dose modifications resolved most cases, but “not all patients had complete resolution of the symptoms,” he noted.

“It is unclear why eye problems developed,” and further investigation is needed to address these problems and determine if there are different patterns of dosing that could avoid these side effects, Dr. Evens said. “These data show why, in part, you still need phase I studies.”

Other grade 3 adverse events were thrombocytopenia, neutropenia, and anemia, each occurring in < 10% of patients. The maximum tolerated dose has not yet been established.

‘Efficacy Was Good’ in Starlyte Study

Another anti-CD19 antibody-drug conjugate, coltuximab ravtansine (CoR, SAR3419), was used to treat patients with relapsed or refractory diffuse large B-cell lymphoma in the phase II Starlyte study.2 All patients had received at least one standard treatment including rituximab (Rituxan) and were not candidates for transplantation. The median age was 71, and 53.7% were male. Primary refractory patients were excluded.

“Efficacy was good,” Dr. Evens said, but these ocular disorders did raise a “red flag.” Eye disorders were not as problematic as in the previously described SGN-CD19A study, and adverse events were limited to grade 1/2 with no keratitis. “But we’ll need to know more about these ocular side effects as time goes on,” Dr. Evens stated.

Eligible patients had previously untreated stage IA, IIA, or III CD30-positive Hodgkin lymphoma and absence of bulky disease (defined as a mediastinal mass greater than one-third of the maximum chest diameter or any mass ≥ 10 cm). Patients received two cycles of brentuximab vedotin 1.8 mg/ kg intravenously every 3 weeks over 30 minutes, followed by three to six cycles of ABVD depending on stage, according to the study abstract.

The median age of the patients was 36 years (range, 19–70 years). Eleven of the 12 patients enrolled had stage II disease, and one patient had stage III disease. After the two cycles of brentuximab vedotin, the 11 patients with stage II disease responded (92%), 10 with complete responses (83%), and 1 patient (8%) with partial metabolic response. Only the patient with stage III disease did not respond, and a new lesion was found.

“This was an interesting trial with a window study design,” as patients received two cycles of brentuximab vedotin before standard treatment with ABVD had “encouraging results,” Dr. Evens said. “No relapses have been observed during subsequent therapy with ABVD with or without radiotherapy,” he added. “Sequential brentuximab vedotin–ABVD (without radiotherapy) warrants further investigation, as in a similar ongoing clinical trial in older patients with untreated Hodgkin lymphoma.”

Two cycles of brentuximab vedotin were well tolerated. Grade 3 adverse events were limited to a transient and asymptomatic increase in liver transaminases in three patients and gamma-glutamyl transpeptidase in two patients.

Dr. Evens also cautioned the brentuximab vedotin should not be given concurrently with bleomycin or gemcitabine. In a recent letter to the editor in Blood, Dr. Evens and several coauthors noted that pancreatitis in patients treated with brentuximab vedotin is “a rare, yet previously unrecognized serious event.”4

In the randomized phase II SEXIE-R-CHOP-14 trial, increasing the dose of rituximab from 375 mg/m2 to 500 mg/m2 significantly improved the outcome for elderly male patients with aggressive CD20-positive B-cell lymphomas also receiving cyclophosphamide, doxorubicin, vincristine, prednisone (CHOP).5 Previous trials had found that at the 375 mg/m2 dose, female patients over 60 years of age had higher rituximab serum levels and better outcomes than males in that age group.

With some additional analyses, including those with younger patients (male and female) treated with rituximab, the difference in responses “probably isn’t so much a male disadvantage, as an elderly female advantage,” Dr. Evens noted, explaining that “elderly women have a much slower [rituximab] clearance than … everyone else.”

Although “rituximab was FDA-approved 17 years ago in 1997, we’re still trying to figure out the dose,” Dr. Evens noted.

To test increasing the effect of increasing rituximab doses, 148 male patients in the trial received 500 mg/ m2 while the 120 females received 375 mg/m2. The trial also tested different dosing schedules, but those results have not yet been reported.

The difference in outcome between elderly males and females “appeared to be abrogated by giving higher doses to male patients, as were trough serum rituximab levels,” Dr. Evens noted. The trial results showed that at 3 years, progression-free survival was 74% in males vs 68% in females (P = .396) and overall survival was 80% in males and 72% in females (P = .111). “It is not quite practice-changing yet,” Dr. Evens said, “but definitely very interesting” and more data, including results of the dosing schedule portion of the trial, are eagerly anticipated.

“Whether 375 mg/m2 for elderly females is optimal is unclear,” Dr. Evens noted. “Since both young male and female patients also have unfavorable rituximab pharmacokinetics compared with elderly females, increasing the dose in these population may also result in a better outcome,” Dr. Evens added. “Additionaly, to compare rituximab with novel CD20 antibodies, bona fide head-to-head comparisons using the same dose and schedule are necessary.”

Summaries of two multiple myeloma studies also were presented at Best of ASCO meeting in Chicago. The phase III PANORAMA 1 trial showed that adding the investigational agent panobinostat to bortezomib (Velcade) and dexamethasone in patients with previously untreated advanced disease resulted in a near doubling of complete and nearly complete responses, 27.6% vs 15.7% for bortezomib with placebo.7 Median overall survival was similar, 33.6 months vs 30.4 months, although data for this endpoint were still immature.

The other multiple myeloma study found that either thalidomide ­(Thalomid) or lenalidomide combined with melphalan/prednisone maintenance therapy produced similar results when administered to newly diagnosed patients ineligible for high-dose therapy.8 Response rates were 75% for patients receiving thalidomide vs 72% for patients receiving lenalidomide. Corresponding complete response rates were 25% and 32%. (Details of both multiple myeloma studies are reported in the July 25, 2014, issue of The ASCO Post.) ■