Cancer Does Not Discriminate

Learning my young son had cancer was the first shock. The second was discovering how many children die from the disease. 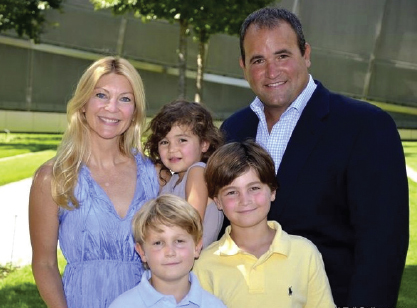 David and Annemarie Plotkin with their children Max, Alexander, and Ella.

Looking back, my son Max’s fall as he was running after another little boy while playing baseball was such a blessing. Although he landed on his right arm, the fall didn’t seem severe enough to cause him to cry out in such excruciating pain. But after several hours of icing the bruise failed to relieve the swelling and his discomfort, my wife Annemarie decided to take Max to the Hospital for Special Surgery in New York for an x-ray. The news was not good. The orthopedic surgeon said the x-ray showed a lesion on the bone that could be either osteomyelitis or, worse, cancer. He recommended that we take Max to Memorial Sloan-Kettering Cancer Center for further tests. Max was just a week shy of his fourth birthday.

A biopsy of the bone lesion showed that Max had B-cell primary non-Hodgkin lymphoma (NHL) of bone, an extremely rare subtype of NHL in children. In fact, this disease occurs so rarely in children, the oncologists at Memorial Sloan-Kettering told us that there are only about 40 pediatric cases in the United States and that they hadn’t treated any children with it.

What made the diagnosis even worse was that the cancer had metastasized to the bone in Max’s left leg. Because he now had stage IV disease, the oncology team prescribed an aggressive, 2-year chemotherapy regimen of BEACOPP (bleomycin, etoposide, doxorubicin, cyclophosphamide, vincristine, procarbazine [Matulane], and prednisone).

From the moment we learned of Max’s diagnosis, my wife and I decided to be honest with him and explain as much as he could understand about his diagnosis and the chemotherapy he would soon be subjected to. We told Max that he had a very serious “boo-boo” called cancer and that he was going to have to take very strong medicine to make it go away.

“What if the boo-boo is stronger than the medicine?” Max asked Annemarie. “Then we will find other medicine,” she replied. It was the only time over the next 2 years that Max showed any fear about his disease. He remained brave throughout his treatment and was unfazed by comments from other children about his bald head or chubby, pale body—the result of the prednisone.

In 2009, Max was declared cancer-free. While we feel incredibly blessed, we live every day with the fear of recurrence or the development of secondary cancers and other late side effects from his treatment.

When Max was diagnosed in 2007, I was a hedge fund trader and the financial collapse was just months away. I was struggling to make a living and eventually left my firm, not knowing if I would ever return to Wall Street. The life of my son was far more important than any one trade, and I was searching for a larger purpose.

Despite the volatility rocking the stock market, our family was fortunate and could afford to be with Max around the clock while he was in the hospital getting treatment. Plus, we lived only a block away from the cancer center and could run home to take a break, have a few moments of “normal” time, and make sure our younger son Alexander, then 2, was doing well.

Other families weren’t and aren’t so fortunate. As I looked around the clinic, I saw parents from all over the world and from different walks of life. We had nothing in common, except the same worried expression on our faces and a singular goal: to save our children.

When Max got sick, I learned two shocking statistics: Cancer is the leading cause of death from disease among children in the United States, and research in pediatric cancers is woefully underfunded. We wanted to give back to a medical system that had given us so much, and in 2007, I walked away from my career to launch the Max Cure Fund for Pediatric Research at Memorial Sloan-Kettering.

Our primary mission is to establish an immune cell therapy laboratory in pediatric cancers at the institution, and we’ve raised nearly $1 million in that effort. We have also partnered with the Samuel Waxman Cancer Research Foundation to fund research in pediatric cancers.

Our other focus now is to provide financial assistance to low-income and military families who have children with cancer, because poverty should not be a reason for a child to die from cancer, and military families shouldn’t have to struggle financially and fight for their children’s lives while their spouses are away fighting for our country. Our family has learned a life-altering lesson: Cancer does not discriminate, and it can touch anyone at any time.

With Max as our inspiration, Annemarie, my father Richard, and I have adopted a new purpose in life and are dedicated to helping find cures for pediatric cancers so other children like Max can survive and live a long and healthy life. ■

David Plotkin is the founder of the Max Cure Foundation (www.maxcurefoundation.org).

May
30
Today In Oncology