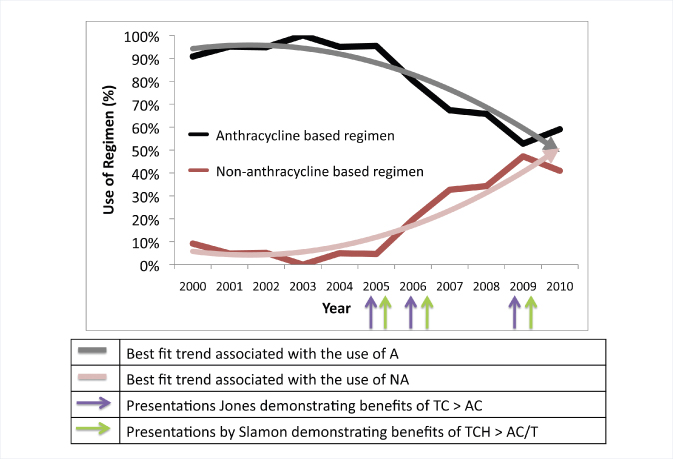 Anthracycline use in early-stage breast cancer has been steadily declining, especially for patients with stage I/II or HER2-positive disease, according to an analysis of patients treated at the University of California, San Francisco (UCSF) School of Medicine.1

“Over the second half of the last decade, the use of anthracycline-based regimens has significantly decreased,” said Ms. Serrurier. “This reduction parallels the presentation of treatment alternatives for the treatment of early-stage breast cancer.”

Anthracycline-based combination chemotherapy is a standard of care for treating early-stage breast cancer, but these agents are associated with significant short- and long-term toxicity, including nausea, vomiting, cardiomyopathy, and secondary leukemias. There has been interest in identifying equally effective non–anthracycline-containing regimens, and evidence now supports the use of TC (docetaxel/cyclophosphamide) and TCH (docetaxel/carboplatin/trastuzumab [Herceptin]). Both of these regimens have been shown to produce disease-free and overall survival benefits.2,3

Ms. Serrurier and colleagues sought to determine if these data have led to changes in chemotherapy prescribing patterns, and to evaluate the impact of TC and TCH on the use of anthracycline-containing regimens based on stage, age, and tumor subtype.

The decrease in anthracycline use was observed across all ages, biologic subsets, and in stage I and stage II disease. The biggest decrease was seen in the treatment of stage I disease (61% reduction) and HER2-positive disease (66% reduction). More than 90% of stage III patients, however, continue to receive anthracyclines, with only a 6% reduction observed.

Interestingly, she added, the use of anthracyclines dropped at this academic institution that receives many referrals and difficult cases that would suggest the need for aggressive treatment.

“We are now evaluating this trend in the Northern California Cancer Registry and in the [National Comprehensive Cancer Network (NCCN)] breast cancer database,” Ms. Serrurier said. “These analyses will for allow for more accurate association of regimen with specific subtype, and most importantly will allow correlations with outcomes over time.” ■