Young age is not a reason, in itself, to recommend mastectomy for early breast cancer in women aged 40 and under, according to two studies presented at the 2011 Breast Cancer Symposium in San Francisco.

“This is an important revisitation of the conventional wisdom that young women who have breast cancer really need to have mastectomy,” Dr. Seidman commented.

“Studies have shown that young age at diagnosis is an independent risk factor for local recurrence after lumpectomy, and our study determined the risk of locoregional and distant recurrences in the modern era of multimodal treatment,” Dr. Buckley said. 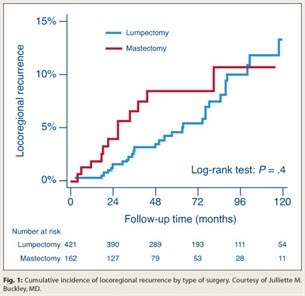 According to these findings, she concluded, “lumpectomy is indeed a safe option for young women.”

In the second study, researchers analyzed the Surveillance, Epidemiology, and End Results (SEER) database of 14,764 women ≤ 40 years old diagnosed with early breast cancer (T1-2, N0-1, M0) between 1990 and 2007, 45% of whom underwent breast-conserving therapy.2 The median follow-up was 5.7 years.

After adjusting for numerous potential confounders, women treated with breast-conserving therapy had no worse outcomes than women treated with mastectomy in terms of overall survival or breast cancer-specific survival, reported Usama Mahmood, MD, of The University of Texas MD Anderson Cancer Center in Houston. In a matched-pair analysis of 4,644 of these women, conducted when Dr. Mahmood was at the University of Maryland, 10-year overall survival was 83% and 10-year cause-specific survival was 86% in each treatment group.

“While a series of studies have compared breast-conserving therapy to mastectomy and found equivalent survival in early-stage breast cancer, there has nonetheless been reluctance to apply the findings to young women. Our study suggests that young women should be counseled appropriately regarding their treatment options and should not choose a mastectomy based on an assumption of improved survival,” Dr. Mahmood concluded. ■

Rakesh Patel, MD, Medical Director of the Targeted Radiation Institute at Western Radiation Oncology, Pleasanton, California, was the invited discussant of the second study. He noted that in spite of well documented equivalent survival rates between the surgical approaches, mastectomy rates are...