In this introductory installment of In the Clinic, The ASCO Post provides an overview of two new melanoma agents recently approved by FDA, with discussion on pivotal data leading to approval, dosage and administration, and managing drug-related toxicities. Watch for more on clinical use of novel oncology agents in future issues of The ASCO Post. How it works—Cytotoxic T lymphocytes (CTLs) are immune cells that kill such target cells as those infected with virus or intracellular bacteria or protozoa and cancer cells. Ipilimumab is a fully human antibody that binds to the cytotoxic T lymphocyte–associated antigen 4 (CTLA-4), a molecule on the surface of cytotoxic T cells that is an important negative regulator of T-cell response. By blocking CTLA-4, ipilimumab acts to sustain cytotoxic T lymphocyte activity by augmenting T-cell activation and proliferation. The immune-related adverse effects of ipilimumab are the result of this sustained/augmented activity.

How it is given—The recommended dose of ipilimumab is 3 mg/kg given IV over 90 minutes every 3 weeks for a total of four doses.

Scheduled doses of ipilimumab should be withheld for any moderate immune-related reactions or symptomatic endocrinopathy. For patients with complete or partial resolution of adverse reactions (grade 0 or 1) who are receiving < 7.5 mg of prednisone (or equivalent) per day, ipilimumab can be resumed at this dosing schedule until the earlier of administration of all four planned doses or 16 weeks from the first dose.

Safety profile—Ipilimumab has a black box warning for immune-mediated adverse reactions. These reactions may affect any organ system and include enterocolitis, hepatitis, dermatitis (including toxic epidermal necrolysis), neuropathy, and endocrinopathy. Although the majority of these reactions were observed to have onset during treatment, some occurred weeks to months after discontinuation of ipilimumab. Ipilimumab should be discontinued and systemic high-dose corticosteroid therapy initiated for any severe immune-mediated reaction. 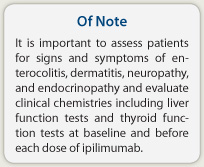 In the pivotal clinical trial of ipilimumab, the most common adverse reactions were fatigue, diarrhea, pruritus, rash, and colitis. Severe or fatal immune-related reactions (grade 3-5) included enterocolitis in 7% of patients, dermatitis in 2.5%, hepatotoxicity in 2%, and endocrinopathies in 1.8% (all of these patients had hypopituitarism and some had such concomitant endocrinopathies as adrenal insufficiency, hypogonadism, and hypothyroidism). One case of fatal Guillain-Barré syndrome and one case of severe peripheral motor neuropathy were reported in this study, and myasthenia gravis and additional cases of Guillain-Barré syndrome have been reported in other experience in the ipilimumab clinical development program.

It is important to assess patients for signs and symptoms of enterocolitis, dermatitis, neuropathy, and endocrinopathy and evaluate clinical chemistries including liver function tests and thyroid function tests at baseline and before each dose of ipilimumab.

Indication—Vemurafenib (Zelboraf) is indicated for the treatment of patients with unresectable or metastatic melanoma with the BRAF V600E mutation as detected by an FDA-approved test. It is not recommended for use in patients with wild-type BRAF. In the clinical trial supporting approval of vemurafenib, performed in treatment-naive patients with the V600E mutation, vemurafenib treatment reduced risk of mortality by 56% (HR = 0.44, P < .0001) and reduced risk of progression by 74% (HR = 0.26, P < .0001) compared with dacarbazine. Median survival durations were not reached in the vemurafenib group vs 7.9 months in the dacarbazine group and median progression-free survival durations were 5.3 and 1.6 months, respectively.

Confirmation of the BRAF V600E mutation using an FDA-approved test is required for vemurafenib treatment. All patients in the pivotal clinical trial had positive results on the cobas® 4800 BRAF V600 Mutation Test.

How it works—Vemurafenib is a low-molecular weight, orally available inhibitor of some mutated forms of the BRAF serine threonine kinase. This enzyme is involved in the transduction of mitogenic signals from the cell membrane to the nucleus. Some mutations in the BRAF gene, including V600E (valine replaced by glutamic acid), result in constitutively activated BRAF proteins, which can cause cell proliferation in the absence of the growth factors normally required for proliferation. By inhibiting this enzyme, vemurafenib interrupts the BRAF/MEK step of the BRAF/MEK/ERK pathway and causes programmed cell death in melanoma cells. Approximately one-half of melanomas have the BRAF V600E mutation.

How it is given—The recommended dose of vemurafenib is 960 mg (four 240 mg tablets) orally twice daily. Doses are taken approximately 12 hours apart with or without a meal. The tablets are swallowed whole with water. 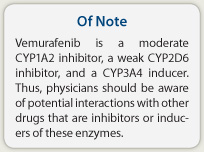 Safety profile—In two clinical studies providing safety data (one in treatment-naive patients and one in previously treated patients), the most common adverse reactions to vemurafenib were arthralgia, rash, alopecia, fatigue, photosensitivity reaction, nausea, pruritus, and skin papilloma. The most common grade 3 adverse events were cutaneous squamous cell carcinoma and rash. Grade 4 adverse events occurred in < 4% of patients in both studies.

Vemurafenib is a moderate CYP1A2 inhibitor, a weak CYP2D6 inhibitor, and a CYP3A4 inducer. Thus, physicians should be aware of potential interactions with other drugs that are inhibitors or inducers of these enzymes. ■