"Hot chemotherapy” has become the common term for hyperthermic intraperitoneal chemotherapy (HIPEC), which together with cytoreductive surgery is being used by some surgeons to treat patients with carcinomatosis from colorectal cancer. While HIPEC is not considered the most important component of the combined therapy, the term “hot chemotherapy” is creating the most buzz. A New York Times article1 reported that some hospitals have capitalized on this buzz by “publicizing the treatment as a hot ‘chemo bath.’”

But does it work? Is there evidence to show that hyperthermic intraperitoneal chemotherapy used with cytoreductive surgery improved outcomes for patients with carcinomatosis (or peritoneal metastases) from colorectal cancer?

Yes, Paul H. Sugarbaker, MD, a leading proponent and practitioner of the procedure, told The ASCO Post. “We have all sorts of data, a randomized trial performed in the Netherlands,2 five multi-institutional studies, and numerous phase II studies from single institutions that say peritoneal metastases can be adequately treated with this new combined treatment,” he said. “Gathering data together from probably 25 different institutions that have been involved in this for a decade or more, we are now able to come up with the prognostic indicators, which give us about a 40% cure.” Dr. Sugarbaker is Director of Peritoneal Surface Oncology at Washington Hospital Center in Washington, DC.

“It is a clinical practice that has very little to no basis in science,” countered David P. Ryan, MD, a gastrointestinal oncologist. “The argument against cytoreductive surgery and HIPEC in peritoneal carcinomatosis from colon cancer can be summed up in four lines,” Dr. Ryan said. “One, it is biologically flawed. Two, there is tremendous selection bias inherent in all the surgical series. Three, it is toxic. And four, the only way to answer the question is with a randomized controlled trial.” He called the Netherlands study “highly flawed” and said that randomized controlled studies of the therapy are needed to prove its worth. Dr. Ryan is Clinical Director of the Massachusetts General Hospital Cancer Center in Boston and Associate Professor of Medicine at Harvard Medical School.

Dr. Ryan and Dr. Sugarbaker presented their divergent views in a debate at the ASCO Annual Meeting in June,3 and in separate follow-up interviews with The ASCO Post.

‘Mother of All Surgeries’ 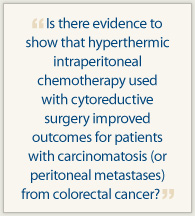 Dr. Sugarbaker’s practice is exclusively devoted to cytoreductive surgery and HIPEC procedures, and he estimated that he does two to three such procedures each week. “When we first started this 20 years ago, patients all had very advanced pseudomyxoma peritonei and peritoneal mesothelioma, and there were some patients with colorectal cancer. It was a horrendous surgical procedure, the ‘mother of all surgeries.’ This was true for all those neglected patients, but it is not the situation anymore,” he said. Patients now are more carefully selected, so those who endure this rigorous therapy are those most likely to benefit. “You do big surgical procedures and initiate chemotherapy in the operating room when you have curative intent,” Dr. Sugarbaker said.

“In every cancer, there is always a subset of patients who will live for a long time,” Dr. Ryan noted. “What we don’t know is whether the surgeons are just selecting out that group of people, with the cytoreductive surgery and the HIPEC really having no impact on the natural history.” Dr. Ryan said that the 5-year survival for patients with colon cancer and peritoneal carcinomatosis who are receiving chemotherapy without any surgery may approach 20%. That 5-year survival estimate, Dr. Ryan explained, represents an extrapolation from data accumulated over the past 15 years since the introduction of oxaliplatin (Eloxatin), irinotecan, bevacizumab (Avastin), and cetuximab (Erbitux) and the widespread use of liver resection. Five-year survival increased from 1% among patients receiving fluorouracil (5-FU), Dr. Ryan stated, to 9.8% among patients receiving FOLFOX (5-FU, leucovorin, oxaliplatin) in Intergroup trial N9741.4 “If patients get all three cytotoxic drugs (5-FU, oxaliplatin, irinotecan), the 5-year survival is 15%.5 This was before bevacizumab,” he pointed out, adding that information in the BRiTE registry showed “5-year survival for bevacizumab-treated patients approached 20%.”6 With the addition of cetuximab to FOLFIRI (irinotecan, 5-FU, leucovorin) for patients with KRAS and BRAF wild-type metastatic colorectal cancer, 5-year survival also approaches 20%,7 he continued. “But the best data,” Dr. Ryan said, “comes from Kopetz, 2009.8 He tried to tease out the independent effects of liver resection and the additional chemotherapy and concluded that the 5-year Kaplan-Meier survival for those patients treated between 2004 and 2006 was between 20% and 25%.”

“For me as a surgeon, this debate over whether patients should be selected is kind of a nonargument,” Dr. Sugarbaker said. “We have learned through the analysis of thousands of patients that there are selection factors. They are based on extent of disease—the so-called peritoneal cancer index. We can quantitate the amount of disease that is present. Whether lymph nodes are positive or not gives us another indication as to how likely the disease is to become metastatic to other sites at some time in the future.”

According to Dr. Sugarbaker, patients with colorectal cancer recommended for cytoreductive surgery and perioperative chemotherapy are those with positive peritoneal cytology, ovarian involvement, peritoneal seeding on the serosal surface of the primary tumor, rupture of a necrotic tumor, adjacent organ involvement, intraoperative tumor spill, perforation of the primary tumor, or limited peritoneal seeding with a peritoneal cancer index < 20, so that complete cytoreduction can be achieved.

“When patients are diagnosed with peritoneal metastases, we make sure that they have had their best systemic treatment, usually a short course of FOLFOX chemotherapy, with a little bit of a wait to let them recuperate from that. Then they go for the cytoreduction surgery and the HIPEC,” Dr. Sugarbaker explained. 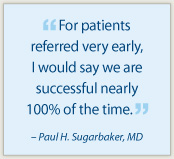 “We are committed to trying to optimize the use of 5-FU with HIPEC,” he continued. “In order to do that, we give the 5-FU with the HIPEC intravenously and then for 4 days afterward intraperitoneally. Not all the groups use intraperitoneal 5-FU after cytoreductive surgery plus HIPEC. We talk all the time about the optimal HIPEC procedure. That is going to evolve, hopefully with trials, over the next decade. Following the cytoreduction with HIPEC, patients usually complete their FOLFOX chemotherapy. That is the ideal setup from my perspective, and I think that is how people do the best,” he said.

“Early referral by the colorectal surgeon or the medical oncologist is absolutely essential in getting a good result for the patient,” Dr. Sugarbaker asserted. “For patients referred very early, I would say we are successful nearly 100% of the time. We can get a complete cytoreduction with the primary cancer resection, removing the peritoneal metastases, and using HIPEC. We can almost promise those patients that they will not have further peritoneal metastases.”

“The crucial aspect of this combined treatment,” Dr. Sugarbaker said, “is the surgery. What we have done is assume—and it is an assumption—that both the HIPEC and the early postoperative intraperitoneal chemotherapy are absolutely essential, and we have tried to improve on the strategy. We don’t use single drugs anymore; we use multiple drugs. We administer a combination of intraperitoneal and systemic chemotherapy in the operating room, using heat-synergized or heat-augmented drugs intravenously. We still need a lot of help from the pharmacists and the medical oncologists to optimize HIPEC, because I don’t think it is optimized at all.”

Dr. Ryan said that thinking of the therapy as “a package deal” might be a mistake. “Maybe the cytoreductive surgery is really beneficial, but the HIPEC has no benefit and may actually be damaging,” he said. “For peritoneal carcinomatosis, we still don’t know whether either of the two interventions do anything to the natural history of the disease,” he said.

Why Heat the Drugs?

The chemotherapy is hyperthermic because “pharmacologically it makes a lot of sense,” Dr. Sugarbaker said. “Heated drugs can be augmented in their activity from 20% to 30% up to 1,000%. We try to use the more heat-augmented drugs, like mitomycin, cisplatin, and doxorubicin. We use those in the peritoneal cavity, and then for the early postoperative intraperitoneal work we use drugs that aren’t as affected by heat, like paclitaxel and 5-FU,” he noted.

“With all due respect to the folks who did the original studies of heating chemotherapy that came out in the 1960s and early 1970s, those studies would not stand up to intense scrutiny today,” Dr. Ryan stated. “There is precious little data that heating chemotherapy does anything.”

Evenly distributing the chemotherapy in the peritoneal cavity “increases the effectiveness and it decreases the possible complications from the HIPEC,” Dr. Sugarbaker said. “When you infuse the chemotherapy into the abdomen from the heater circulator, it comes in at about 44°C maybe even 45°C, and then you move it around so that you don’t have any hot spots. Even more important than avoiding hot spots is you don’t have areas that are untreated.”

In most cases, Dr. Sugarbaker uses the open technique, inserting his hands into the peritoneal cavity to swish the drugs around. But for some drugs, such as melphalan, Dr. Sugarbaker prefers to use the closed technique. “You can close the abdomen and then use a gentle—sometimes not so gentle—percussion to try to keep the chemo moving around,” he explained. 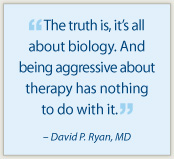 Dr. Ryan said that he could understand why patients would be interested in aggressive therapy such as this. “It is countercultural for patients to not do anything,” he said. “It is very American to think that you can control your destiny when it comes to cancer. The truth is, it’s all about biology. Either the cancer is sensitive to the treatments we offer, or it is not. Either it is fast-growing, or it is not. And being aggressive about therapy has nothing to do with it. We learned that lesson in bone marrow transplant,” he said, referring to breast cancer trials with high-dose chemotherapy and bone marrow transplant.

“In every part of medicine we always learn about the unintended consequences from the randomized, controlled trials,” Dr. Ryan continued. “The unintended consequence of high-dose chemotherapy in breast cancer was that we gave women leukemia and myelodysplastic syndrome. We didn’t realize we were doing that. Not only were we immediately killing 3% to 5% of people who underwent the procedure, but 10 years later a bunch of those folks were getting leukemia and myelodysplastic syndrome from the high doses of chemotherapy,” he said.

“One of the unintended consequences of cytroreductive surgery plus HIPEC could be that maybe cytoreductive surgery is beneficial, but the HIPEC is hurting you. Maybe it causes multiple small bowel obstructions. Or maybe you don’t respond to chemotherapy as you would have, and therefore you have shortened your survival. We don’t know the unintended consequences because we haven’t done the randomized, controlled study,” Dr. Ryan said. “Increasingly, procedures and devices are being used just like medicines to alter the natural history of a particular cancer,” he added. “What we really need to do is hold them to the same level of scrutiny.”

An ongoing clinical trial is comparing standard systemic chemotherapy with or without cytoreductive surgery and HIPEC, but patient recruitment has been very difficult. “We are committed to seeing that study through, if possible,” Dr. Ryan said. “We really want to offer every single patient candidate that particular study.” At Massachusetts General, Dr. Ryan’s institution, Dr. James Cusack, a surgical oncologist, will be performing cytoreductive surgery and HIPEC.

A second study is also needed to evaluate the role of cytoreductive surgery alone, Dr. Ryan said. “We need these studies,” he said. “Our patients need them. And we need to end the argument.” ■

Among the merits of good clinical studies, according to David P. Ryan, MD, of Massachusetts General Hospital Cancer Center and Harvard Medical School, is being able to cite them when a physician sits down with a patient to explain the possible benefits and drawbacks of treatment. Dr. Ryan stressed, ...

One point that Paul H. Sugarbaker, MD, and David P. Ryan, MD, agreed on was that ASCO has done a service to the oncology community by presenting their debate about cytoreductive surgery and hyperthermic intraperitoneal chemotherapy. That debate, conducted at the 2011 ASCO Annual Meeting, sparked...