The health of Americans, the economy, the debt crisis, and the action or inaction in Washington are all seriously interrelated. Decades ago, the bank robber Willie Sutton was asked why he robs banks. His famous answer, “Because that’s where the money is,” succinctly describes the approach that Washington has taken toward the health-care economy.

The last time Congress and the President balanced the budget, when President Bill Clinton and Speaker Newt Gingrich were in power, the economy was balanced on the back of health care, specifically nursing homes, home health, and reimbursement to hospitals and physicians. Since physician services account for only 20% of the health-care dollar, all patient services had to be reduced in order to balance the budget. Hospitals, nursing homes, home health devices, and pharmaceuticals were then (and will be again) drastically affected. This new round of debt reduction and, in part, the Patient Protection and Affordable Care Act passed in 2010 will also impact services—some positively, some negatively.

As a last ditch effort of the forces that were opposed to it in Congress, that 2010 health-care reform legislation is being questioned as to its constitutionality. Since the Republicans could not kill the legislation in either the House or Senate, and the President signed it, the third branch of the Federal government, the Judiciary, is where the focus has shifted. As of this writing, two appeals courts have ruled the Affordable Care Act is constitutional and one has ruled it is unconstitutional. The Obama Administration has requested that the Supreme Court hear this case. Thus, it will  likely go to the Supreme Court. I think the Court may rule narrowly, that the portion of the Affordable Care Act requiring purchase of insurance does not meet the Commerce Clause, but regardless of whether the Court rules for or against that portion of the Act, the remainder of the bill will remain the law of the land. The issue will not be resolved until both the Court acts and the results of the 2012 election are determined.

As the Affordable Care Act progresses, another issue looms large: the Balanced Budget Act of 1998 with its attendant Sustainable Growth Rate. This Act provided for an automatic reduction in health provider payments if Medicare limits were exceeded (as they have been for every year since). It has never been fully implemented, and each year Congress has pushed the enforcement forward with an accumulated effect of each year increasing the amount of reduction to health providers for the following year. Today, the “fix” for this excess in Medicare spending will require nearly $250 billion. The law calls for doctors to receive a 30% reduction in annual payments beginning in 2013. However, Congress will certainly not allow this draconian cut to occur.

Demonstrating a bit of sleight of hand, Congress took money from one program (the Affordable Care Act subsidies to families, raising the penalty for earning more money than the original subsidy would allow, from $250 to $450, in 2014 and beyond), and flipped it to doctor reimbursement, so that doctors treating Medicare patients would not have a reduction in their compensation.

The recently enacted Debt Reduction Act of 2011, which caused such partisan wrangling in the preceding months, increases the strain. With this Act, a “super committee” was created to find $1.5 trillion in debt reduction on top of the $1.5 trillion the legislation allegedly reduces. In fact, the Debt Reduction Act only slows the increase of the debt. The election of 2012 will determine whether there will be real savings because the Act specifically lasts until early 2013. Again, Congress has “kicked the can down the road.” 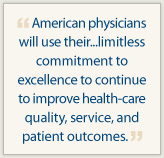 Thus, the accumulated effects of the Patient Protection and Affordable Care Act (2010), the Sustainable Growth Rate (1998, with continuing avoidance of the enforcement), and the Debt Reduction Act (2011) were designed to increase access, stabilize the economy, and continue to fund Medicare at rates allowing health-care providers to maintain everyone’s desired service requirements, while reducing the debt. Uncertainty remains, but time will tell.

What is absolutely certain is that American physicians will use their enormous human and technologic resources and limitless commitment to excellence to continue to improve health-care quality, service, and patient outcomes. The question is, can the business model that has been the backbone of private solo, partnership, or group practice be sustained with all the financial strains? Clearly, expenses for physicians’ small businesses are not reduced by Acts of Congress. In fact, they can have the opposite effect.

Working with both Republicans and Democrats—to educate them as to the consequences of their actions or inactions—is the only process by which American medicine can be maintained as it has been practiced for generations. The market and American leadership are telling us we need to change the private practice model. The battle is joined. ■