Screening for Ovarian Cancer May Do More Harm Than Good, but New Therapies for the Disease Are Improving Outcomes

The Prostate, Lung, Colorectal, and Ovarian (PLCO) Cancer Screening Trial, which employed annual simultaneous CA-125 and transvaginal ultrasound over 4 to 6 years, did not reduce ovarian cancer mortality, and there was, in fact, evidence of harm from diagnostic evaluations and surgery following false-positive screens.1 The randomized study involved 78,216 women aged 55 to 74, enrolled between 1993 and 2001 and followed until February 2010.

“Screening did not impact the detection of early tumors that could improve survival,” she said, calling the PLCO trial “an important study but with limitations.”

Dr. Matei’s concerns included the variable duration of follow-up from the time of enrollment, the use of fixed CA-125 cutoffs (ignoring individual variation), and the lack of a standardized approach to positive screens. But the trial is consistent with other large studies, she said, which have also found no mortality benefit with screening. Results from the UKCTOCS study in the United Kingdom, expected in 2015, should help determine definitively the value of screening for ovarian cancer. 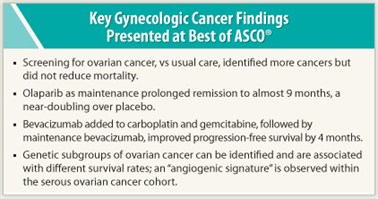 Disease remission was significantly prolonged by maintenance treatment with the poly (ADP-ribose) polymerase (PARP) inhibitor olaparib in the phase II trial of 265 patients with a prior response to platinum regimens.2 Maintenance with olaparib reduced progressive disease by 65%, with median progression-free survival being 8.4 months with olaparib vs 4.8 months with placebo (P < .00001). Disease progressed in 44% (olaparib) and 72% (placebo). Overall survival data are not yet mature.

“This is a very timely and important trial,” Dr. Matei commented. An integrated analysis of 500 serous ovarian adenocarcinomas from The Cancer Genome Atlas project found homologous recombination to be defective in 53% of tumors, suggesting that ovarian cancer is a good target not only for platinum agents but also for PARP inhibitors.

Phase III trials of PARP inhibitors in recurrent disease are planned, including an upfront combination of a PARP inhibitor, chemotherapy, and bevacizumab (Avastin) by the Gynecologic Oncology Group. Research efforts should also aim to determine the optimal timing and sequence of such agents, identify predictive biomarkers for homologous repair deficiency, and understand mechanisms of resistance to PARP inhibitors, she said.

Maintenance therapy with bevacizumab also prolonged remission by 4 months in 480 platinum-sensitive patients with recurrent cancer (of the ovaries, peritoneum, or fallopian tubes) in the OCEANS trial.3 Bevacizumab added to carboplatin and gemcitabine, followed by bevacizumab until progression, improved progression-free survival to 12.4 months, from 8.4 with chemotherapy alone—a 52% reduction in risk (P < .0001). Interim overall survival analysis showed a trend toward benefit, with median overall survivals of 35.5 months and 29.9 months, respectively (P = .094).

“Bevacizumab’s activity in ovarian cancer is much higher than in colon, lung, and breast cancers, and comparable to activity in renal cell carcinoma,” Dr. Matei commented. “Three randomized trials have been positive in the adjuvant and recurrent settings. The most benefit has been seen in higher-risk groups—those with recurrent disease and those suboptimally debulked in the adjuvant setting.”

Future studies in ovarian cancer will be needed to answer questions about dose, duration, and patient selection.

“Expression profiling on macrodissected FFPE specimens is feasible with this novel platform, and the molecular profiling correlates tightly with histologic subtype,” Dr. Matei noted. Pending validation, the 25-gene signature with functional angiogenic significance, ie, “angiogenic signature,” may someday help select patients for bevacizumab. While “we are not there yet” with regard to the molecular classification of ovarian cancer, progress is steady. ■

For bevacizumab (Avastin), as for all targeted agents, there is a critical need to identify likely responders as well as patients at risk for serious toxicities, agreed Daniela Matei, MD, of the Indiana University Melvin and Bren Simon Cancer Center, and session moderator Daniel F. Hayes, MD, of...