Studies presented at the ASCO Annual Meeting in the field of noncolorectal gastrointestinal cancer both reaffirmed certain standards of care and introduced some practice-changing data, according to A. Craig Lockhart, MD, of Washington University in St. Louis.

After curative resection of gastric or gastroesophageal junction cancer, the combination of ECF (epirubicin, cisplatin, and infusional 5-FU) is not more efficacious or safer than the standard of bolus fluorouracil (5-FU) and leucovorin when incorporated into a chemoradiation scheme, according to findings of the Cancer and Leukemia Group B (CALGB) 80101 trial.1

Among 546 patients with resected tumors, each regimen was given before and after chemoradiation. The postchemoradiation doses of epirubicin and cisplatin in ECF were reduced because of toxicity concerns. Trial results showed that the two groups did not differ significantly regarding disease-free and overall survival, and had similar rates of toxicities.

“A question that came up is, did the downgrading of the epirubicin and cisplatin doses potentially impact the efficacy [of the ECF]. I don’t think we have the answer at this time,” Dr. Lockhart said. 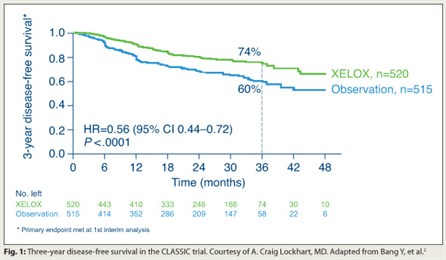 The phase III CLASSIC trial showed that giving XELOX (capecitabine [Xeloda] plus oxaliplatin) in the adjuvant setting improves disease-free survival in gastric cancer even after the more extensive D2 resection.2

In all, 1,035 patients in South Korea, China, and Taiwan underwent a D2 resection and were randomly assigned to XELOX or observation. Median dose intensity was 85% for capecitabine and 98% for oxaliplatin, and there were no unexpected toxicities.

The 3-year rate of disease-free survival was better with XELOX (74% vs 60%; HR = 0.56; P < .0001; Fig. 1). Rates of recurrence were reduced at all sites: locoregional, peritoneal, and distant. Overall survival did not differ. “But this study had not been going on long enough to look at that definitively,” Dr. Lockhart noted.

“Adjuvant XELOX is a standard option following a D2 resection,” he concluded. “In my opinion, this is practice-changing.”

The 193 patients were randomly assigned 2:1 to second-line chemotherapy (docetaxel or irinotecan) or best supportive care. Relative dose intensity was 95% for docetaxel and 93% for irinotecan.

With a median follow-up of 17 months, overall survival was better with second-line chemotherapy than with best supportive care (5.1 vs 3.8 months, P = .009). Benefit did not differ between docetaxel and irinotecan recipients.

“Interestingly, no quality-of-life data were presented,” Dr. Lockhart noted. However, there was a trend toward a lower rate of grade 3/4 fatigue with chemotherapy vs best supportive care (18% vs 27%). And a similar study of second-line irinotecan found an improvement in symptoms.4

“Second-line chemotherapy can be considered a standard approach for patients with good performance status…who want to receive second-line therapy,” he maintained.

Sorafenib for Child-Pugh B Patients with Hepatocellular Carcinoma 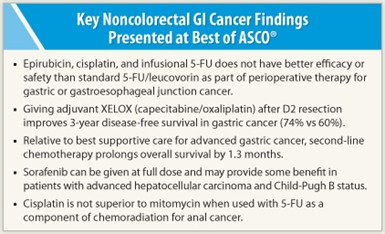 Patients with advanced hepatocellular carcinoma having Child-Pugh B class liver function may derive some benefit from sorafenib (Nexavar) and can start on the full dose, according to new data.5

In a second interim analysis of the GIDEON study, which is assessing sorafenib therapy in routine clinical practice, investigators analyzed data from 1,612 patients. The Child-Pugh class was A, B, and C in 70%, 27%, and 3% of patients, respectively.

The majority of patients received the full 800-mg dose of sorafenib, regardless of Child-Pugh class. However, the median treatment duration fell off with class—it was 14, 9, and 4 weeks with A, B, and C class. The corresponding rate of adverse events leading to treatment discontinuation was 24%, 38%, and 51%.

Median overall survival was 10.3, 4.8, and 2.0 months. The 10.3 months in patients with class A liver function is “reassuring” because it mirrors that in clinical trials, according to Dr. Lockhart. The results suggest the same dosing strategy can be used for patients with Child-Pugh A and B class, he said.

“Right now, there is no indication to treat Child-Pugh C patients with sorafenib,” Dr. Lockhart maintained. “I would argue that Child-Pugh B patients probably don’t benefit much from sorafenib either, but if you don’t have other options, such as a clinical trial, I don’t think it’s wrong to [offer it].”

Cisplatin is not superior to the standard mitomycin when used with 5-FU in chemoradiation for rectal cancer, according to long-term results of the Radiation Therapy Oncology Group (RTOG) 98-11 trial.6

Differences in patients’ tumor characteristics and in surgical practices between eastern and western countries may limit the transferability of clinical trial results in early gastric cancer, according to Dr. Lockhart.

One major difference is tumor location. For example, in the Asian CLASSIC...