Axitinib vs Sorafenib in Second-line RCC

Axitinib, a potent and selective investigational vascular endothelial growth factor (VEGF) receptor inhibitor proved superior to sorafenib (Nexavar) in the second-line treatment of renal cell carcinoma.1 Among the 723 patients in the phase III AXIS trial, median progression-free survival was 6.7 months with axitinib and 4.7 with sorafenib—a 34% reduction in risk (P < .0001).

“The investigators noted that more potent biochemical targeting of the VEGF receptor seems to be associated with superior clinical activity in renal cell carcinoma, and I agree. Their more controversial conclusion was that axitinib should be considered the reference standard in second-line advanced renal cell carcinoma. My comment on this is, ‘maybe,’” Dr. Oh said (see sidebar). 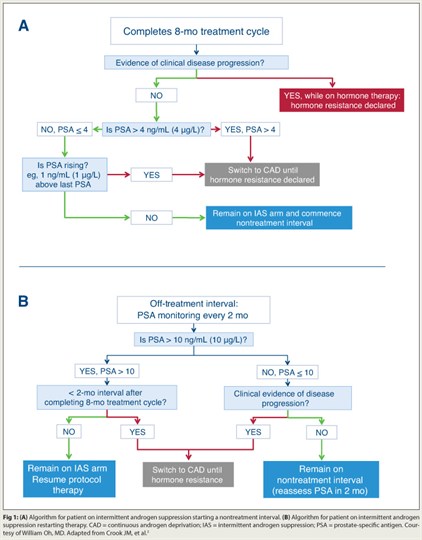 “The findings suggest that intermittent androgen suppression is a reasonable option for patients with PSA recurrence, and arguably the standard of care,” Dr. Oh maintained. “My recommendation is to use these cut-points and follow the study’s algorithm (Fig. 1), but a few questions remain. Are some men at greater risk of dying of prostate cancer with intermittent androgen-deprivation therapy? Prostate cancer deaths were 41% with intermittent androgen suppression, vs 34% with continuous androgen deprivation. And do men need androgen-deprivation therapy at all for rising PSA? It’s the standard of care, but only because we all use it.”

Add to the growing list of agents for metastatic castration-resistant prostate cancer the drug cabozantinib—a novel inhibitor of MET and VEGFR2—which was granted orphan drug status by the FDA earlier this year. In a phase II trial of 151 patients, median progression-free survival was 21 weeks with cabozantinib vs 6 weeks with placebo (P = .0007).3 Three-quarters of patients demonstrated evidence of tumor regression, including complete resolution of bone lesions in 19% and partial resolution in 56%. Bone scan resolution correlated highly with clinical effects, such as pain and markers of bone resorption.

“The study was very suggestive that carbozantinib delayed progression. The hazard ratio (HR = 0.13) was impressive for such a small study, and bone scans looked almost too good to be true. In my 20 years in prostate cancer I have never seen anything like this,” Dr. Oh commented.

“Before we know for sure if cabozantinib is the real deal, two things need further assessment—toxicity and quality of life,” he added. “When drugs are going to delay but not eradicate disease, we need to know patients can tolerate them long-term.”

How Prognostic Are Circulating Tumor Cells? 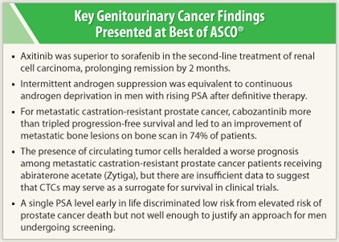 The presence of ≥ 5 circulating tumor cells (CTCs) heralded a worse prognosis among the 1,195 patients enrolled in the phase III study of abiraterone acetate (Zytiga) plus prednisone postdocetaxel.4 Circulating tumor cells were counted at baseline and periodically posttreatment. Conversion from < 5 CTCs per 7.5 mL to ≥ 5 was predictive of overall survival, and elevated CTCs correlated with an attenuation of treatment effect. Conversion was significantly more likely in the abiraterone arm: 48% by week 12 vs 17% with placebo (P < .0001); median overall survival was 22 vs 10 months, respectively.

“This was a large study with ambitious goals, but it was basically negative. It was unable to show that circulating tumor cells could substitute for overall survival in clinical trials,” Dr. Oh noted. “In the multivariate analysis, baseline lactate dehydrogenase remained as powerful a prognostic factor as CTCs (P < .0001), and it is a 60-year-old biomarker that costs $40. PSA level was not prognostic, but PSA declines were not compared to CTCs as surrogates. So circulating tumor cells may have their greatest promise as a ‘liquid biopsy’ to target cancers in a personalized approach.”

“This study reiterates the importance of age-specific ranges and long natural history. Early PSA discriminated men at low risk from men at elevated risk of death from prostate cancer many years later, but at this time we cannot use a single PSA to rule out future cancer. More study is needed, especially in other populations,” he said. ■

Disclosure: Dr. Oh has a consultant or advisory relationship with Medivation, Dendreon, Amgen, Bellicum, and Pfizer.

With a new tyrosine kinase inhibitor joining the armamentarium, the question is how to optimize targeted agents for advanced renal cell carcinoma.

The AXIS trial demonstrated strong clinical activity for axitinib, which was superior to second-line sorafenib (Nexavar) and generally appears most...