Data presented at the ASCO Annual Meeting this year on the management of locoregional lung cancer present a mixed picture, with some advances and some disappointments, according to H. Jack West, MD, of the Swedish Cancer Institute in Seattle, who reviewed studies in this area at the Best of ASCO Seattle meeting.

Among the 132 patients studied, the rate of clinical feasibility (defined as no deaths due to cancer, toxicity, or comorbidities; no patient early withdrawals; and no dose-limiting toxicities) was higher with cisplatin/pemetrexed (95.5% vs 75.4%, P = .001; Table 1). The mean duration of therapy was similar (11.2 vs 9.9 weeks). Dose delays and interruptions were about twice as common in the cisplatin/vinorelbine arm, solely due to adjustments in vinorelbine. 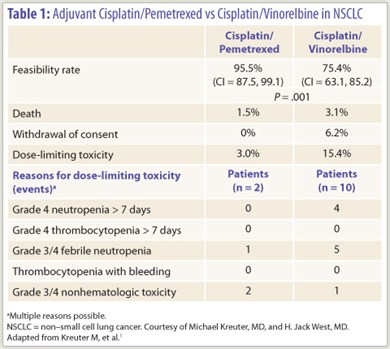 Generalizability of the trial is limited, according to Dr. West. “This is a younger, cherry-picked, fitter population than at least the people who walk into my office on average,” he noted. Also, the majority were male, and 38% had stage IB disease (a group for whom chemotherapy has debatable benefit).

“Adjuvant cisplatin-based chemotherapy is still standard of care, at least for stage II and IIIA resected NSCLC, and arguably for selected stage IB patients,” Dr. West said. “The [existing] evidence is strongest for cisplatin and vinorelbine,…but the reality is that it is truly challenging to administer. So despite the lack of randomized data in the adjuvant setting, cisplatin/pemetrexed is clearly more feasible per the TREAT trial.”

That said, there are several other reasonable options, such as cisplatin/gemcitabine. “And in truth, it needs to be an individualized decision with your judgment, working with the patient in front of you,” he maintained. 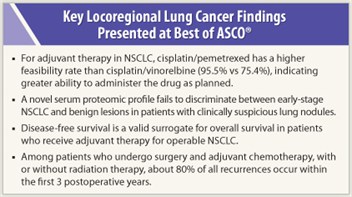 In patients with lung nodules that are clinically suspicious for stage I cancer, a new serum proteomic profile is not helpful for determining which are indeed cancer and which are simply benign lesions, finds the phase II American College of Surgeons Oncology Group (ACOSOG) Z4031 trial.2

Serum was collected before and 60 and 90 days after surgery for resection of the nodules in 913 patients and analyzed by mass spectrometry. Pathology showed that 79% of the patients had NSCLC.

“The implications today: No need to go back and start sending off [serum] for this. It’s not yet ready for use,” Dr. West commented. “But it’s still an admirable goal, and I hope and expect we’ll see more efforts along these lines, hopefully more successfully as our technology improves.”

Results have been more encouraging in another recent study that also used mass spectrometry proteomics, but this time working with a predefined biomarker profile generated using prospectively collected data from tumor tissue and cell lines.3 Results suggested that this profile does discriminate NSCLC from controls. Moreover, it works similarly well in patients who had never smoked.

“This is still early, it’s not yet available, and it needs more validation,” Dr. West cautioned. “But it at least should give a glimpse that this is not pie-in-the-sky work and that we may still succeed.”

In a development that may help expedite clinical trials, new data show that disease-free survival can serve as an earlier surrogate endpoint for overall survival in patients who undergo lung cancer resection and receive adjuvant chemotherapy.4

Additionally, in the analysis looking at surgery plus chemotherapy, with vs without radiation therapy, about 80% of all recurrences occurred within the first 3 postoperative years.

“So [the investigators] propose that disease-free survival can be used as a surrogate for overall survival in adjuvant chemotherapy for lung cancer, potentially as the primary endpoint,” Dr. West noted. But he also concurred with them that new analyses will be needed to see if the same holds true with targeted therapies. “It would be a mistake to generalize these results,” he said.

“My own caveat on this is that I am not sure that the results will hold as true in an era today of effective therapies,” he commented. “Today’s postrecurrence treatments work better, and patients are living longer, which may weaken the correlation between disease-free and overall survival and necessitate longer follow-up.” ■

Accumulating data are helping to better define the risk-benefit profile of various adjuvant chemotherapy regimens for non–small cell lung cancer (NSCLC) and the impact of adding biologic agents to the mix, according to H. Jack West, MD, of the Swedish Cancer Institute in Seattle.