At the Best of ASCO® Miami meeting, Omid Hamid, MD, The Angeles Clinic and Research Institute (www.theangelesclinic.org), Los Angeles, California, reviewed abstracts that received a great deal of attention at this year’s Annual Meeting—the new treatments for metastatic melanoma. He also described key data that had been presented for adjuvant therapy of the disease.

Can Interferon Treatment Time Be Shortened?

The Intergroup E1697 trial evaluated 4 weeks of high-dose interferon alfa-2b (Intron A) induction among 1,150 patients with T3 disease or tumors of any thickness with microscopically positive nodes.1 Patients were randomized to postoperative adjuvant interferon for 5 days per week for 4 weeks, or observation.

“Duration and intensity of therapy may be an important variable for benefit from interferon,” Dr. Hamid noted. “The study asked whether the induction phase of high-dose interferon is the major contributor of benefit. If effective, the 4-week regimen would be a major improvement in terms of toxicity, convenience, and cost.”

E1697 was terminated early when an interim analysis found no benefit for the experimental approach. Median recurrence-free survival was 7.3 months with high-dose interferon and 7.8 months with observation (P = .69), and 5-year overall survival rates were 85% and 82%, respectively (P = .38). 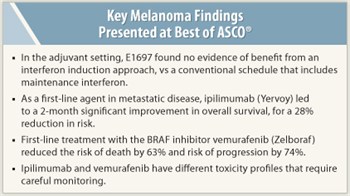 The results are in keeping with those of the largest adjuvant trial ever conducted in stage III melanoma—European Organisation for Research and Treatment of Cancer (EORTC) 18991—which showed that 8 weeks of pegylated interferon alfa-2b (Pegintron, Sylatron) followed by maintenance for up to 5 years improved recurrence-free survival but not distant metastasis-free survival or overall survival, with best results seen in patients who had sentinel node–positive, ulcerated melanoma.

A slightly different approach was reported at the 2011 ASCO by Italian investigators, who found comparable (though not superior) recurrence-free survival with a shorter but more intensive high-dose interferon regimen (4 courses of interferon 5 days per week for 4 weeks every other month).3

The negative results of E1697, along with other studies from the EORTC, support the importance of longer high-dose interferon treatment duration (ie, 1 year of maintenance) to optimize outcomes, Dr. Hamid said.  “In the adjuvant setting we have learned that to show activity we need trials of about 1,000 patients and 500 events. And future studies must include the two new drugs with efficacy in the metastatic setting,” he added.

Metastatic melanoma carries an overall survival rate of only 25% at 1 year and 10% at 2 years. This will change with the introduction of ipilimumab (Yervoy) and vemurafenib (Zelboraf), the first drugs shown to improve overall survival in this disease.

In the phase III Study 024 trial, first-line treatment with ipilimumab plus dacarbazine improved overall survival by 2 months, vs dacarbazine alone.4 The fully human monoclonal antibody, a CTLA-4 blocker that augments T-cell activation, was approved by the FDA in March. 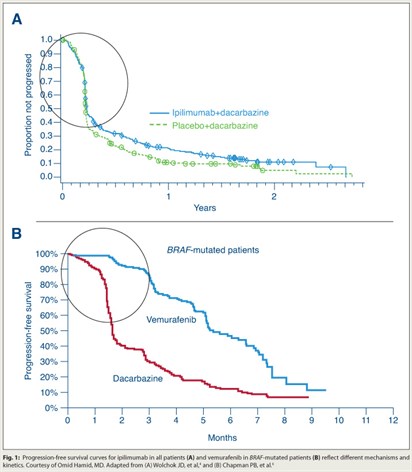 respectively, at 3 years.  Median duration of response was 19.3 months with ipilumumab/dacarbazine compared to 8.1 months with dacarbazine.

“We see the traditional partial and complete responses, but we also see tumors progress and then respond past the time of initial evaluation,” Dr. Hamid said. “There is a doubling in survival over what we typically see, and a plateau of the tail of the survival curve even many years out from treatment initiation,” he noted.

“In future trials, I think we can evaluate the dose-response effect we see by comparing 10 mg vs 3 mg, followed by maintenance.”

Ipilimumab was also shown, in a study reported at the Annual Meeting, to extend overall survival to 2 years in 26% of patients with brain metastases.5 In addition to further study in this subset, Dr. Hamid suggested ipilimumab be evaluated in combination with cytotoxics, vemurafenib and other targeted agents, novel immunomodulators, and anti-VEGF agents.

In the first interim analysis, progression-free survival was 5.3 months with vemurafenib vs 1.6 months with dacarbazine—a 74% reduced risk (P < .0001). Overall survival rates at 6 months were 84% vs 64%, respectively—a 63% reduction (P < .0001). Confirmed response rates were 48.4% vs only 5.5%, respectively. The benefits in response and survival were seen across all subgroups examined.

“With vemurafanib we see an initial separation between the arms that continues. There are durable and ongoing responses. The data in both the first line [BRIM3] and second line [BRIM2]7 seem extremely promising.”

He added that the overall survival curve is markedly different from that of ipilimumab (Fig. 1), “which reflects different mechanisms and kinetics of the drugs.” ■