In locally advanced non–small cell lung cancer (NSCLC), immunotherapy consolidation with the PD-L1 inhibitor durvalumab improved overall survival in the PACIFIC trial,1 thus leading to its use after chemoradiotherapy as a standard of care. Real-world evidence of durvalumab’s effect on overall and progression-free survival, however, has been limited, as have assessments of treatment patterns after completion or discontinuation of durvalumab. A look at these outcomes was the aim of three studies from outside the United States, which were presented at the International Association for the Study of Lung Cancer (IASLC) 2022 World Conference on Lung Cancer.2-4

The 177 patients had been diagnosed with stage III NSCLC and had received durvalumab, with a median follow-up of 12 months. Researchers extracted patient-level information from an integrated multicenter database. The study’s primary endpoint was median overall survival, and secondary endpoints were the time to treatment discontinuation and exposure after disease progression.

The second study was a retrospective analysis of 106 patients with stage III NSCLC, with progression-free survival as the primary endpoint.3 Researchers also evaluated the benefit of durvalumab after chemoradiotherapy consolidation in subgroups based on epidermal growth factor receptor (EGFR) status and expression of PD-L1.

The 1-year progression-free survival according to subgroups is shown in Table 1. EGFR status was a factor in the length of remission, but PD-L1 status was not. 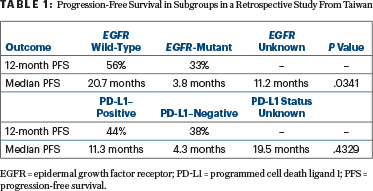 Dr. Kuo noted that the data for subgroup analyses should be interpreted with caution because of the small populations, imbalances in baseline characteristics, and other potential confounders. The most common adverse events were respiratory, including pneumonitis, which occurred in 21% of patients.

The overall survival benefit of durvalumab was also confirmed in a single-institution study in Croatia.4 In this study of 42 patients from the University Hospital Centre Zagreb, median overall survival was not reached. Cumulative survival at the end of data cutoff, after a median of 32 months of treatment, was 66.7%, according to Marko Jakopovic, MD.

Altogether, 21 patients (50%) completed the planned 12 months of treatment; 14 (33%) had disease progression during durvalumab therapy, and 7 (17%) discontinued therapy earlier because of adverse events.

Median progression-free survival was 24.1 months, with longer remissions observed in female (median not reached) than in male patients (17.2 months; P = .042). No age-related differences were observed, according to Dr. Jakopovic. Patients with PD-L1 expression of at least 50% had significantly longer progression-free survival than those with lower PD-L1 expression (median 8.1 months vs not reached; P = .0009).

“Surprisingly, disease stage and nodal status did not influence progression-free survival, nor did tumor histology,” Dr. Jakopovic said. “A significant progression-free survival benefit was observed among patients who underwent concurrent chemoradiotherapy, compared with those who were treated sequentially (not reached vs 5.1 months; P = .0008),” he added.

Durvalumab was initiated at a median time of 45 days from the day of radiation therapy completion. Although a significant number of patients received durvalumab therapy with a long time lag after radiotherapy completion, no differences regarding progression-free survival were observed between those whose immunotherapy was started within the recommended 6-week period compared with others, Dr. Jakopovic reported.

Patients whose side effects caused treatment delay or cessation did not have a shorter progression-free survival. The most common adverse event was pneumonitis, any grade of which occurred in 40% of patients but was grade 3 or 4 in just one patient.

Zanubrutinib vs Ibrutinib in Relapsed or Refractory CLL