The text and photographs here are excerpted from a four-volume series of books titled Oncology: Tumors & Treatment, A Photographic History, The Anesthesia Era 1845–1875 by Stanley B. Burns, MD, FACS, and Elizabeth A. Burns. The photograph appears courtesy of Stanley B. Burns, MD, and The Burns Archive. To view additional photos from this series of books, visit burnsarchive.com.

These images of a poor Dubliner, before and after surgery, not only document the successful removal of his tumor, but also serve as an example of the cultural considerations of the era. Social status often dictated the manner in which a patient was clinically photographed in the 19th century. Draping of patients, though rare, was usually confined to cases from the wealthier classes. Lower-class patients posed in their street clothes without their conditions isolated or their modesty preserved. In nearly all cases, however, rich or poor, the entire patient appeared in the photograph. Physicians viewed their patients this way to help them better understand the nature of the disease or injury and its effect on the patients. Empathy with the patient is increased with this confrontational posing style.

Focus on Disease or Patient?

As the physician’s ability to diagnose and isolate diseases improved with the advent of laboratory, pathology, bacteriology, and other medical advances, medical photographers took greater care to isolate wounds or diseased parts. By the early 20th century, the clinical photographer conventionally used careful draping for all cases, so an individual’s privacy, so important to modern medicine and modern society, would be preserved; neither the sufferer nor his social position would be known. The disease now became more important than the patient.

Ironically, this isolation of disease also led to modern medical specialization, which has come increasingly under popular criticism for treating parts of the patient rather than the whole person. Now that holistic medicine encourages a more humanistic approach, perhaps a return to photographing the entire person will benefit the patient-doctor relationship. The photograph would offer a personal and social context as well as a clinical one. 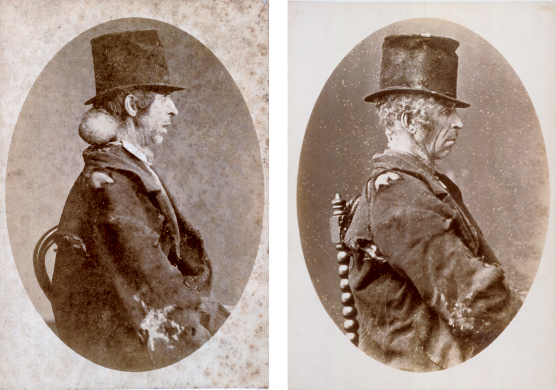 These photographs are from an original series of cabinet cards used to make engravings for publication along with case histories in the Dublin Journal of Medical Science. This patient’s case was published in 1875. The Dublin medical community used the firm of Robinson & Sons as its official photographers in the 1870s. James Robinson was a surgeon-dentist who became a photographer in 1845. It is rare to have the original photographs used for publication, as they were usually destroyed after being copied. The images are most likely one of a kind and made for the physician or publication. These images have additional value as historical documents, for although a significant amount of time must have passed for the neck lesion to heal completely from surgery, the patient wears the same ragged coat and battered hat in both.