The ASCO Post’s Integrative Oncology series is intended to facilitate the availability of evidence-based information on integrative and complementary therapies sometimes used by patients with cancer. In this installment, Eugenie Spiguel, MSN, ANP-BC, and Jyothirmai Gubili, MS, explore the current research findings on graviola, the small, heart-shaped fruit from a flowering evergreen tree, because of its popularity as an antioxidant agent among patients with cancer.

Graviola is a small, evergreen tree indigenous to many tropical areas in Central and South Americas and to the Caribbean. It bears edible, heart-shaped fruit known as graviola in Brazil, guanabana in Spanish-speaking countries, and soursop in the United States. Pulp from the fruit is used to make drinks and sherbets.

Revered as a cure-all by many cultures, graviola has a long medicinal history for treating inflammatory conditions, rheumatism, insomnia, cystitis, parasitic infections, and cancer. All parts of the tree including the bark, leaves, fruits, and roots are used in herbal medicine.

Despite the lack of substantial evidence, graviola is widely promoted as an anticancer agent. In a 2016 survey, it was reported to be among the commonly used herbal remedies by patients with cancer in the Caribbean.1 Supplemental forms that are marketed include capsules, liquid extracts, juice blends, teas, and tinctures.

The concentration of graviola extracts used in animal models in the previously mentioned studies ranged between 50 mg/kg and 400 mg/kg body mass. Graviola has not been evaluated in clinical trials.

Mechanistic studies have shown that alkaloids derived from graviola are detrimental to the survival of dopaminergic nerve cells. Neurodegeneration was reduced by increasing the amount of glucose in culture medium, suggesting that cell death may have been caused by energy depletion.22 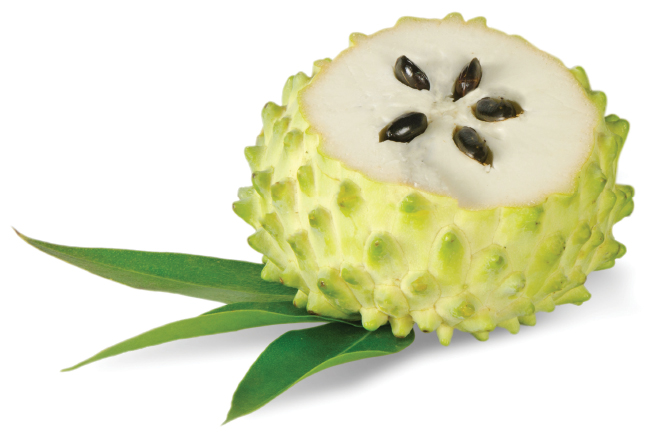 Graviola’s antidiabetic effects have been attributed to its antioxidant, hypolipidemic, and protective effects in pancreatic beta cells, which may improve glucose metabolism.9 Graviola extracts also demonstrated antiulcer effects by increasing nitric oxide and prostaglandin E2 activities10; as well as anti-inflammatory and analgesic actions by inhibiting cyclooxygenases 1 and 2 and via blocking opioid receptors.7 However, long-term ingestion of graviola juice has been reported to promote generation of reactive nitrogen species that may accelerate the development of neurodegenerative diseases involving the microtubule-associated protein tau.23

Consumption of graviola is generally safe, but its alkaloid constituents have been shown to cause neurotoxicity in vitro. Also, the safety and effectiveness of graviola have yet to be evaluated in patients with cancer.

The acetogenin bullatacin was found to reduce tumor growth in a murine model of hepatic cancer. However, repeated treatment with bullatacin resulted in hepato- and nephrotoxicity via ROS production as well as by increasing calcium concentration, Bax expression, and the Bax/BCL-2 ratio.28

In vitro studies have shown that the alkaloids present in graviola cause movement disorders and myeloneuropathy, with symptoms mimicking Parkinson’s disease.22,29

Repeated treatment with bullatacin, a bioactive compound, was found to cause hepato- and nephrotoxicity.28

Whether or not these effects occur in humans has yet to be determined.

Antidiabetics and antihypertensives: Studies in murine models show that graviola has hypoglycemic and hypotensive effects and therefore may have additive effects.32,33 However, the clinical significance of these findings is not known.

Graviola is a popular food and supplement in many countries outside of the United States. It is frequently used as an antioxidant, to decrease inflammation, and as an antidiabetic and anticancer supplement. Although preclinical studies have shown some positive effects, no studies have been performed in patients with cancer. It is important for clinicians to know that, in murine models, graviola was associated with a decreased uptake of the radiopharmaceuticals used in nuclear imaging. Patients and their care teams should be aware that long-term ingestion of graviola juice may accelerate neurodegenerative diseases. Further study of graviola is needed. ■

4. Zamudio-Cuevas Y, Díaz-Sobac R, Vázquez-Luna A, et al: The antioxidant activity of soursop decreases the expression of a member of the NADPH oxidase family. Food Funct 5:303-309, 2014.