The text and photograph on this page are excerpted from a four-volume series of books titled Oncology Tumors & Treatment: A Photographic History, by Stanley B. Burns, MD, FACS, and Elizabeth A. Burns. The photo below is from the volume titled “The Anesthesia Era: 1845–1875.” The photograph appears courtesy of Stanley B. Burns, MD, and The Burns Archive. To view additional photos from this series of books, visit burnsarchive.com. 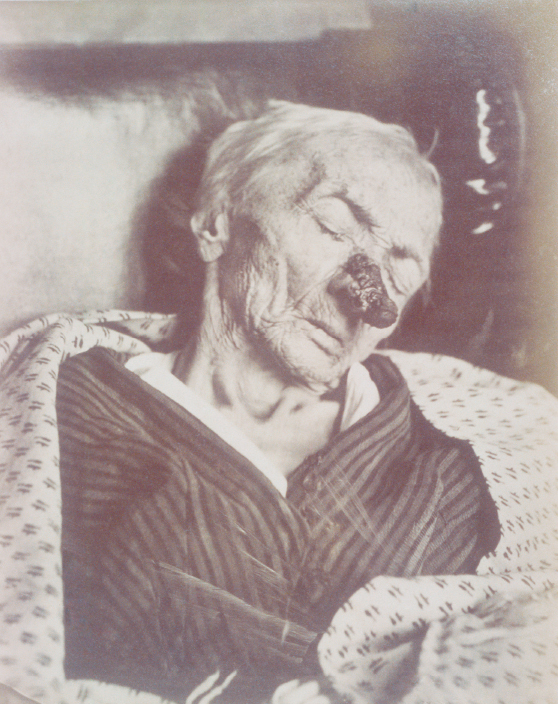 This case represents the use of a conservative treatment for carcinoma. Rather than attempt to operate or treat with caustics, this elderly patient’s French surgeon admitted her to the hospital. She was kept in the hospital until her death 8 months later. At no time was any aggressive therapy offered, only palliative care. At age 89, she was extremely long-lived, and her dementia probably precluded treatment. The photograph was presented as an example of an unusual geriatric disease.

V, aged 89, entered the Salpêtrière Hospital on the service of (Dr). Voison on December 11, 1871. She was suffering from senile dementia and an epithelial tumor of the nose. The tumor was believed to have started 10 years earlier, but the information may not be precise. Until age 79, she was in good health. In the winter of 1862, when in Russia, she had a bout of freezing of the nose, with an eschar developing about the size of a 50-centime coin. Around the area, the skin was whitish. After a few weeks, an inflammatory reaction ensued. During the following years, the lesion continued to grow, and her health deteriorated.

December 1871: The nose growth was enveloped with dry, grayish crusts and discharge. The skin around the lesion was indurated. The eyes were congested, with swelling of the right upper lid. There was no fever. Examination of the chest showed bowing of the ribs. On auscultation, there were signs of pulmonary emphysema. There was no abnormality of the heart and no enlargement of lymph nodes of the neck. The disease had resulted in advanced cachexia. She was emaciated, with extreme weight loss. She had a cadaveric appearance.

July 1872: The patient spent the time since December resting on the service. There was little change in her condition. The tumor had grown to within a few millimeters from the corner of the right eye. A photograph was taken at this time. There was now enlargement of the lymph nodes of the neck. At this time, there were no thoracic or abdominal complaints. During the month of July, she became more senile.

August (early) 1872: She became immobile, and her nutrition became poor.

August 19, 1872: We noticed in the region of the right parotid the development of swelling and
redness.

August 22, 1872: During 3 days, the patient took no nourishment and went into a coma. The parotid gland continued to swell. She succumbed slowly without convulsions.

Autopsy showed the parotid was swollen and infiltrated with pus with multiple abscesses. The tumor of the nose showed typical tubules of epithelioma. ■