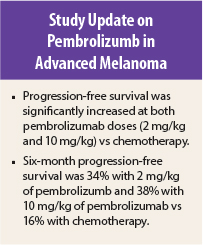 These findings establish pembrolizumab as a new standard of care for the treatment of ipilimumab-refractory melanoma.

A total of 540 patients with progressive disease within 24 weeks after at least two ipilimumab doses and, if BRAF V600-mutant positive, previous treatment with a BRAF or MEK inhibitor or both took part in this open-label trial. They were randomized 1:1: between November 2012 and November 2013 to receive pembrolizumab 2 mg/kg (n = 180) or 10 mg/kg (n = 181) every 3 weeks or investigator-choice chemotherapy (n = 179, including 42 to paclitaxel plus carboplatin, 28 to paclitaxel, 13 to carboplatin, 45 to dacarbazine, and 43 to temozolomide).

Patients had to have resolution of all ipilimumab-related adverse events to grade 0 or 1 and prednisone ≤ 10 mg/d for at least 2 weeks. Randomization was stratified by Eastern Cooperative Oncology Group performance status, lactate dehydrogenase (LDH) concentration, and BRAF V600-mutation status. Patients were masked to the dose of pembrolizumab. The primary endpoint was progression-free survival in the intent-to-treat population.

The benefit of both pembrolizumab doses was observed in all prespecified subgroups, including BRAF and LDH status subgroups.

On independent central review, response was observed in 21% of patients in the pembrolizumab 2-mg/kg group and 25% of the 10-mg/kg group vs 4% of the chemotherapy group (P < .0001 for both comparisons). Overall survival analysis is awaited.

Treatment-related grade 3 or 4 adverse events occurred in 11% of patients in the pembrolizumab 2-mg/kg group, 14% of the pembrolizumab 10-mg/kg group, and 26% of the chemotherapy group, with the most common in pembrolizumab patients being fatigue (1% and < 1% vs 5%) and the most common in the chemotherapy group being anemia (5%), fatigue (5%), neutropenia (4%), and leukopenia (4%). Treatment-related adverse events led to treatment interruption in 8%, 8%, and 18% of patients and treatment discontinuation in 3%, 7%, and 6%, respectively.

The investigators concluded: “These findings establish pembrolizumab as a new standard of care for the treatment of ipilimumab-refractory melanoma.” They noted that since available data do not indicate that one pembrolizumab dosing regimen is superior to another, the pembrolizumab dose of 2 mg/kg given every 3 weeks is recommended for further use. ■

Disclosure: The study was funded by Merck Sharp & Dohme. For full disclosures of the study authors, visit www.thelancet.com.

Anti–PD-1 Superior to Chemotherapy in the KEYNOTE-002 Trial

Immunotherapy, once considered a niche treatment for a few specific cancers, has rapidly emerged as an additional pillar of cancer therapeutics. With the proliferation of promising results, clinical trials, and new drug approvals, one cannot help but be amazed that only 3 years have elapsed since...

Overcoming the Challenges of Improving Psychosocial Care for Patients With Cancer