The ASCO Post’s Integrative Oncology series is intended to facilitate the availability of evidence-based information on integrative and complementary therapies sometimes used by patients with cancer. In this installment, Ting Bao, MD, DABMA, MS, and Jyothirmai Gubili, MS, focus on shiitake mushroom because it is used by many patients with cancer, although clinical trials are limited on its potential anticancer properties.

Shiitake, an edible mushroom native to East Asia, is cultivated worldwide for its health-promoting effects. Both the fresh and dried mushrooms are used in East Asian cuisine. It is also employed in traditional medicine and is valued as a potential anticancer agent.

Lentinan, a polysaccharide obtained from shiitake, is thought to be responsible for the mushroom’s beneficial effects. An injectable form of lentinan is used as a cancer treatment in some countries, but it remains to be evaluated in larger studies.

Supplemental forms of shiitake include tablets, capsules, and extracts. 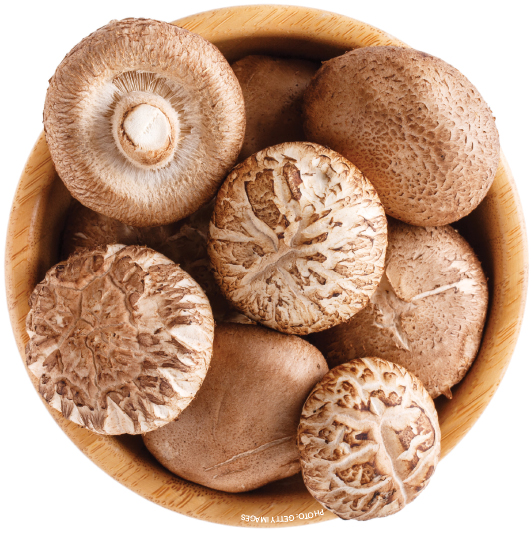 Clinical data on shiitake mushroom are limited. In a trial involving 52 healthy young adults, consumption of either 5 or 10 g of shiitake mushrooms daily for 4 weeks resulted in improved immunity.7 Along with elevated serum IgA production, there was an increase in the levels of interleukin (IL)-4, IL-10, tumor necrosis factor (TNF)-alpha, and IL-1alpha; reduction in macrophage inflammatory protein-1α/chemokine C-C ligand 3 (MIP-1α/CCL3) level; and no change in IL-6, IL-1beta, MIP-1beta, IL-17 or interferon (IFN)-gamma levels.7

In a small nonrandomized study, eight patients with advanced gastrointestinal cancer undergoing two courses of chemotherapy were given 1,800 mg of shiitake mycelial extract (during the second course of chemotherapy) daily for 4 weeks.8 The authors reported grade 1 nausea and abdominal pain as well as grade 2 nausea at the end of the first course but no such effects at the end of the second course. They also found an upward trend in the production of IFN-gamma by CD4+ T, CD8+ T, and CD56+ NK/NKT cells.8

Shiitake mushroom is a popular medicinal mushroom. Physicians should be aware of the lack of robust data to support its use as an anticancer agent.

For additional information, visit the “About Herbs” website at www.mskcc.org/cancer-care/integrative-medicine/herbs/shiitake-mushroom.

However, 8 g/d of a shiitake extract taken for 6 months was found to be ineffective in lowering prostate-specific antigen levels in patients with prostate cancer.10 Larger, well-designed trials are needed to evaluate the anticancer potential of shiitake.

Mechanistic studies revealed that shiitake extract–induced apoptosis involves caspase 3 and 8 pathways.11 Polysaccharides obtained from shiitake also seem to exert antitumor effects by increasing serum IL-2 levels and production of TNF-alpha, and by inducing apoptosis.11 The anticancer properties of lentinan are likely via suppression of cytochrome P450 1A enzymes, which metabolizes procarcinogens to their active forms.12

Exposure to shiitake spores has been reported to cause chronic hypersensitivity pneumonitis in a patient with lung cancer.13

Ingestion of whole shiitake mushroom caused small bowel obstruction, which led to necrosis and mucosal damage in the small intestine.18

Consumption of raw or even cooked shiitake mushrooms led to patterns of whiplike, linear, erythematous wheals, which have been associated with toxic reactions to lentinan.19,20

Chronic ingestion of shiitake mushrooms may elevate the eosinophil count.16

Shiitake mushroom has been marketed as an immunomodulator and a potential anticancer agent. However, preclinical studies and clinical trials on its anticancer properties are limited. Patients and care teams should be aware of the possible risks of pulmonary or skin hypersensitivity reaction, as well as gastrointestinal symptoms, following ingestion of shiitake mushroom.