For Liver Metastases, Transarterial Radioembolization With Yttrium-90 Plus Chemotherapy May Delay Disease Progression

In the international phase III EPOCH trial, patients with colorectal liver metastases who experienced disease progression on first-line therapy derived significant benefit from treatment with transarterial yttrium Y-90 radioembolization in combination with systemic chemotherapy, according to Mary F. Mulcahy, MD, of Northwestern University, Chicago.1 The study findings were simultaneously published in the Journal of Clinical Oncology.2

Transarterial radioembolization with Y-90 glass microspheres provides selective internal radiotherapy, with beta-emitting particles delivered through the hepatic vasculature into tumor-feeding arteries. The inherent vascularity of hepatic colorectal lesions in the arterial phase provides a strong rationale for the investigation of glass-based transarterial radioembolization in the second-line setting, she explained.

Transarterial radioembolization with Y-90 plus chemotherapy resulted in a median progression-free survival of 8.0 months, vs 7.2 months with chemotherapy alone (hazard ratio [HR] = 0.69; P = .0013). Hepatic progression-free survival was increased as well to 9.1 months, vs 7.2 months (HR = 0.59; P < .0001). However, no significant differences were seen in overall survival.

The EPOCHtrial enrolled 428 patients with unresectable unilobar or bilobar liver metastases who were fit for chemotherapy (irinotecan- or oxaliplatin-based), with or without targeted therapy, as second-line treatment. The liver tumor burden was less than 10% in more than half the patients, and more than two-thirds of patients had a maximum lesion size of at least 40 mm. Approximately two-thirds had at least 6 lesions, and more than one-third had at least 10 lesions. About half the study patients had nonmetastatic extrahepatic lesions at baseline. Almost half the patients had KRAS mutations.

Second-line therapy was irinotecan-based in 60%; biologics were part of treatment for 42%; bevacizumab was given to 42%, and less than 5% received an agent targeting epidermal growth factor receptor.

In key subgroups, the transarterial radioembolization/chemotherapy approach yielded considerable improvement in progression-free survival in patients with KRAS mutations (HR = 0.57), left-sided primaries (HR = 0.65), hepatic tumor burden of between10% and 25% (HR = 0.43), and fewer than three lesions (HR = 0.33), as well as in patients receiving a biologic as part of second-line treatment (HR = 0.58). Outcomes for hepatic progression-free survival mirrored these findings. 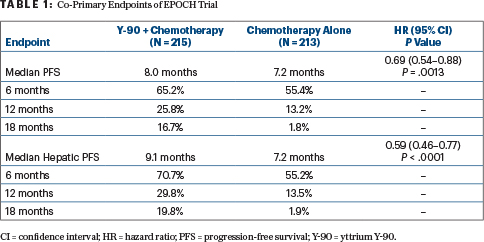 Overall response rates were 34.0% with transarterial radioembolization/chemotherapy and 21.1% with chemotherapy alone. Stable disease was observed in 45.6% and 51.6%, respectively. Approximately 13% of patients in both arms had progressive disease as best response.

Invited discussant of the phase III EPOCH trial, Thomas Gruenberger, MD, a surgical oncologist at the Clinic Favoriten, Health Network Vienna, noted that the trial’s “intention was fulfilled,” thus making it the “first positive phase III trial that prolonged both progression-free and hepatic...