Nationally recognized oncologic surgeon Sandra L. Wong, MD, MS, FASCO, FACS, was born and raised in Stockton, California, a city on the San Joaquin River, in California’s Central Valley. “My parents were both immigrants, but unlike the stereotypical picture of hard-driving immigrant parents who pressure their kids to pursue higher education and careers in law or medicine, my parents—neither whom graduated high school—always emphasized the importance of being happy and having diverse interests. They worked super hard in what might be considered menial jobs to support me and my two siblings, and although they emphasized the importance of a good education, they wanted us to enjoy ourselves and not live under undo stress,” said Dr. Wong.

An Early Interest in Business

Although Dr. Wong didn’t dream of becoming a doctor early on, she loved all that school offered, including the social and extracurricular activities.  “I was the editor of our high school’s yearbook and a member of the student council. So I had a diverse experience in high school. And although my father never had a formal education, he was interested in entrepreneurship; I sort of picked up on that and developed an interest in business,” said Dr. Wong.

Following high school, Dr. Wong entered the University of California (UC), Berkeley. “UC Berkeley was a great experience. It was a state school, which helped in the finance department, but it was also a big campus with a lot going on. By then I’d decided on pursuing something science-oriented, and I majored in molecular and cell biology. But at one point, I needed a fill-in class. Some of my friends were accounting majors, so I just took an accounting class. I thought it was fun, and I ended up getting a minor degree in business,” said Dr. Wong.

“For a short time at the end of college, I considered parlaying my science and business degrees into a consulting career,” she added. “But at the end of the day, I realized that I would enjoy working with people who needed care more than business, so I decided to go to medical school.”

After achieving her undergraduate degree from UC Berkeley, Dr. Wong entered Northwestern University Medical School in Chicago. “That was a big move because, for all practical purposes, I left California never to go back. In retrospect, I don’t think that a career in surgery had entered my head, but I do remember wanting to become a specialist.”

She continued: “At the time, there was a huge push for medical students to become primary care physicians and be on the front line of patient care, largely due to the arrival of [health maintenance organizations] on the health-care scene. During my medical school interview, when asked about going into primary care, I made an offhanded comment that if everyone is going into primary care, who’s left to deliver specialty services?”

Asked about her decision to pursue a career in surgery, Dr. Wong replied, “During my first year in medical school, all of my small groups were headed by surgeons. After a few days of my surgical rotation, I think everyone knew that I was going to be a surgeon, especially the attendings and residents. Surgery was hard work that demanded intense focus, and it was also a way to harness the power of handheld tools to change the course of a life-threatening disease. It sounds a bit clichéd, but there’s an ‘intensity of the moment’ about surgery that you either like or don’t like, and the decision happened pretty rapidly. There wasn’t a lot of ambivalence in the decision.” 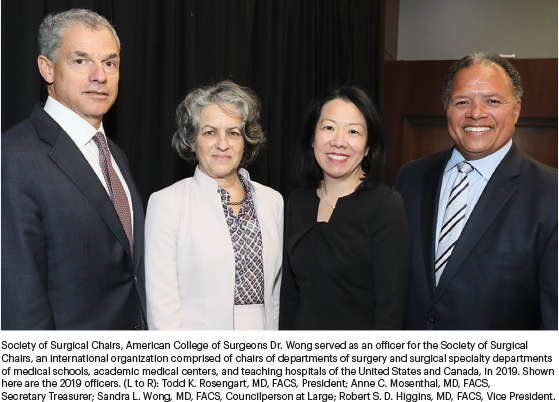 Dr. Wong did her general surgery residency at the University of Louisville and a clinical fellowship in surgical oncology at Memorial Sloan Kettering Cancer Center, where she served as Chief Administrative Fellow. “The mentorship I had during my residency was the defining part of my ultimate decision to become a surgical oncologist. My most significant mentor was Dr. Kelly McMasters, who to this day is a friend and valued colleague,” she noted.

“Kelly was recruited back to Louisville after a stint at The University of Texas MD Anderson Cancer Center, and I decided to spend some time in the laboratory with him, as he was doing some cool stuff with gene therapy. Also, at that time, you really needed to have lab experience to be competitive for a fellowship,” said Dr. Wong.

“In addition to lab work, I also had the opportunity to do some very interesting clinical projects with Kelly,” she continued. “It wasn’t that I didn’t like lab work, but the clinical research just grabbed me, and I was hooked. So that was another defining period that shaped my decision to become an academic oncologist who did clinical research as well as surgery.”

“During my surgical fellowship at Memorial Sloan Kettering, Dr. Murray Brennan was Chair of Surgery, and he truly redefined my thoughts about surgical oncology from an academic perspective. I came to realize that although taking care of patients with cancer was the primary reason I became an oncologist, I also wanted to think bigger-picture about how we deliver cancer care throughout the system, in a way that is equitable and always advancing the field,” said Dr. Wong.

Currently, as Chair of Dartmouth-Hitchcock’s Department of Surgery, Dr. Wong practices surgical oncology and maintains an active clinical research program. “Along with my clinical and research activities, I also do a large amount of administrative work. We are a National Cancer Institute–designated comprehensive cancer center, which brings with it another level of responsibility. In our section of New Hampshire, we have a large rural patient population, so that in itself comes with certain care delivery challenges, which we are exploring in some of our current research,” said Dr. Wong.

For instance, she noted that the gap in life expectancy between rural and urban Americans has increased 500% since 1970, in part due to disparate access to and receipt of cancer care. “We’re interested in rural cancer disparities, which is an issue that has been inadequately studied, most notably with regard to the intersection of factors such as income, race and ethnicity, and other broader socioeconomic indicators,” said Dr. Wong.

To that end, Dr. Wong commented, the COVID-19 pandemic has forced greater utilization of telemedicine in order to maintain a continuum of care with rural patients. “My research career has been defined by the examination of cancer care delivery, and one must look at the systemic issues involved in rural care through a different lens, because it is challenged by larger degrees of separation by distance,” she said. “So how we can deliver better, more accessible care to patients who have to travel over mountainous regions in the dead of winter? People find a way to travel for surgery, but it’s traveling long distances for follow-up and consultations that can be at least partially relieved by telemedicine.”

“It sounds a bit clichéd, but there’s an ‘intensity of the moment’ about surgery that you either like or don’t like, and the decision happens pretty rapidly.”
— Sandra L. Wong, MD, MS, FASCO, FACS

Oncology Is a Unique Opportunity

What advice would this noted academic oncologist give to a bright young medical student who is still undecided about a career path? “I’m biased by my passion for oncology. But I would remind someone thinking about a future career that oncologists have a unique relationship with their patients, as these are the most vulnerable people in our health-care system. A diagnosis of cancer is life-altering, and it is a privilege to be able to help a patient with cancer on that difficult journey. No matter what the outcome, it is important to be there to ensure that the best, most compassionate care possible is delivered. It is a tough career, but the rewards are worthwhile. I can’t imagine doing anything else.”

How does a busy surgical oncologist and researcher decompress? “Teaching and monitoring students certainly are a fun part of my job, and finding fun and newness in my career helps me decompress. I just love what I do.”