The text and photograph on this page are excerpted from a four-volume series of books titled Oncology: Tumors & Treatment, A Photographic History, The Anesthesia Era: 1845–1875 by Stanley B. Burns, MD, FACS, and Elizabeth A. Burns. The photograph appears courtesy of Stanley B. Burns, MD, and The Burns Archive. To view additional photos from this series of books, visit burnsarchive.com.

“When my mother died I was very young,
And my father sold me while yet my tongue
Could scarcely cry, ‘weep! weep! weep! weep!’
So your chimneys I sweep, and in soot I sleep.”

The identification of occupational diseases was a major advance in public health. For centuries, various authorities recognized that workers in certain occupations, such as mining, had shorter lives. It was not until 1770, when Bernardo Ramazzini, MD, wrote his classic treatise, “De Morbus Artificum Diatriba” (Diseases of Workers), that medical practitioners took a closer look at occupations, their environment and diseases.

Just 5 years later, in 1775, England’s Percival Pott, MD (1714–1788), published his observation that chimney sweeps, those boys and men who cleaned chimneys, often developed scrotal cancer. This was the first identified occupational cancer. The carcinogen was chimney soot, the residue from smoke. (This identification of a smoke derivative as a carcinogen could have been a clue to astute researchers that “smoke” in other forms was also carcinogenic.) Due to the nature of the work, the soot came into prolonged contact with scrotal skin, which apparently has a high susceptibility to coal, tar, pitch, creosote, and certain lubricating oils, and cancer was the frequent result. 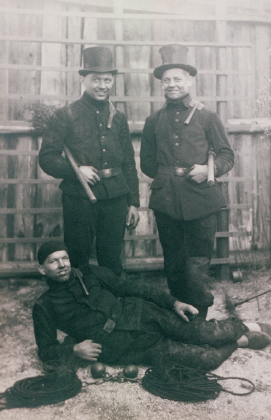 Some chimneys made in 18th century England were only 7 inches in diameter; therefore only very young children could navigate the twisted channels. Age was not a factor in acquiring the disease, and many young sweeps died. In the 19th century, wider chimney channels were dictated by new building codes. This photograph of chimney sweeps, circa 1872, depicts their traditional garb and tools.

In 1906, London’s S.R. Wilson, MD, recognized mule spinners’ disease. It is a cancer identical to that contracted by the sweeps. Mule spinners were the workers in the cotton textile industry who joined broken threads spinning on machinery called a “cotton mule.” In order to accomplish this task, they had to bend over a groin-level bar saturated with lubricating oil, and this oil penetrated their clothing. Because the work was very arduous, the men perspired freely. It is posited that the perspiration washed the protecting natural moisture and grease from the scrotum so the machinery oil could freely penetrate the skin, creating a fertile site for formation of scrotal cancer.

Scrotal cancer is a rapidly progressing disease with a high mortality rate. The primary lesion is an indurated lesion that presents as a wart or pimple-like eruption in the scrotal skin, which then ulcerates. This was known to chimney sweeps as a “soot-wart.” The cancer classically metastasizes to the local lymph nodes. In this secondary stage the lymph nodes of the groin enlarge, indurate, and eventually ulcerate. An advanced case could present with a groin full of large ulcers. Surgical excision was the treatment of choice. Almost all patients with scrotal cancer, a metastasizing squamous cell carcinoma, died.

The industrial revolution created numerous new occupations, along with recognition of work-related dangers. In 1832, Charles T. Thackrah, MD, wrote The Effect of Arts, Trades, and Professions on Health and Longevity. This classic work describes the effects of various jobs in manufacturing, agriculture, and trades on the health of their participants. Dr. Thackrah was also one of the first to call attention to the deleterious effects long hours and dangerous jobs had on children. Many noted authors took up the cause of these mistreated children, creating public awareness and sympathy. In Oliver Twist (1837), Charles Dickens described the 1834 English law that made it illegal to bind boys under 10 to apprenticeship as a chimney sweep. Gamfield, Dickens’ villainous master-sweep, has become a legendary literary figure.

In 1875, 100 years after Dr. Pott’s landmark book, a bill introduced by Lord Shaftesbury was passed that ended the abuse of young chimney sweeps. By the end of the first decade of the 20th century, the unacceptable social costs of industrialization resulted in child labor laws and occupational health regulations becoming an almost yearly legislature endeavor. Modern concepts of “childhood” and parenting responsibilities also became firmly established.

One of the great medical contributions of the 20th century was creating general public awareness and legislative protection against environmental and occupational disease. Although epidemiologists have now identified the basis of hundreds of occupational maladies, it is up to the individual patient’s physician to make the connection. Physicians know it is far more difficult to take an accurate history than it is to do an adequate physical exam. Many occupational diseases, especially cancer, occur long after the patient has left the job, so occupational histories must be taken from the patient’s first job forward. The careful identification of each task involved with every job is also critical for proper diagnosis.

By 1955, occupational hazards were so well identified that London physician Donald Hunter, MD, was able to write a 1,000+-page text on the subject, The Diseases of Occupations. The history of medicine prior to 1950 can be described as a study of the conquest of infectious disease, and post-1950, medicine is chiefly concerned with the study of chronic disease, with the prime focus on cardiovascular disease and cancer.