“The majority of breast cancers are hormone receptor–positive, and treatments that target the estrogen receptors are very effective, but they also cause havoc in many tissues that are dependent on estrogen for normal functioning. As a result, breast cancer survivors suffer from ongoing symptoms and morbidities associated with long-term endocrine therapies that oppose the effects of endogenous estrogen,” Patricia A. Ganz, MD, FASCO, told the nearly 700 participants at the 2019 Lynn Sage Cancer Symposium in Chicago.1 “I believe we should treat everyone with breast cancer,” she added, “but we also need to think about the experience of the patient.”

Dr. Ganz is Associate Director for Population Science at the Jonsson Comprehensive Cancer Center, Los Angeles and Distinguished Professor in the UCLA Schools of Medicine and Public Health. “She has perhaps done more than any other single individual to establish the field of survivorship in breast cancer,” Monica Morrow, MD, FASCO, said in introducing Dr. Ganz. Dr. Morrow is Chief of Breast Surgery at Memorial Sloan Kettering Cancer Center, New York. The symposium was hosted by the Robert H. Lurie Cancer Center of Northwestern University.

Risk factors for developing breast cancer include early menarche and late menopause, which result in a woman’s longer exposure to endogenous hormones. “There is a profound relationship between endogenous exposures and the risk of getting breast cancer,” Dr. Ganz noted.

Among women being treated for breast cancer, “fluctuations in serum estradiol may affect many organ systems in the body, including the brain, joints, muscles, endothelium, and reproductive tract organs,” she said. “We clearly see this in menopause, in terms of hot flashes and other symptoms. And we certainly see this magnified when we give targeted endocrine treatments for breast cancer.”

Treating premenopausal women with chemotherapy can push these women into “an abrupt transition to menopause,” Dr. Ganz said. The addition of ovarian suppression therapy “is a new source of increased symptoms that we haven’t had to deal with in the past.”

With the extension of endocrine therapy to 5 to 10 years in both premenopausal and postmenopausal women, “we need to think about what this is going to do to women who are surviving long term with a breast cancer diagnosis. These treatments contribute to symptoms above and beyond normal menopause,” Dr. Ganz said.

“Breast cancer treatments exacerbate common symptoms of menopause and aging,” Dr. Ganz noted. Signs of accelerated aging may not be seen until 25 to 30 years later, which is something to think about when treating younger patients.

The wide distribution of estrogen receptors throughout the body means that drugs affecting estrogen levels may have widespread effects, Dr. Ganz noted, but not in everyone. A woman’s reproductive/hormonal status before and after treatment, as well as ongoing therapy, may have distinct effects on behavioral symptoms. “We need to take into context where the woman is in her reproductive life span,” Dr. Ganz said, and the potential for her body to adjust to a lower estrogen state. 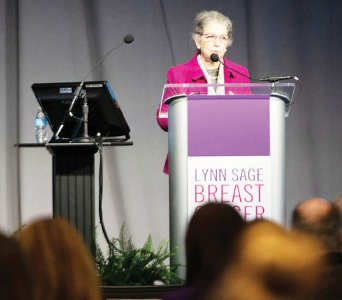 Tissue trauma from surgery, radiation, and chemotherapy increases the likelihood of circulating inflammatory cytokines. “Many of the treatments that we give that are associated with inflammation can lead to changes in the neuroendocrine system, sleep-wake cycle differences and inflammation, and effects on the central nervous system, and then lead to behavioral symptoms, such as depression, fatigue, impaired sleep, and cognitive dysfunctions,” Dr. Ganz said.

The UCLA Mind-Body Study enrolled 189 posttreatment patients with early-stage breast cancer at the end of primary treatment (surgery, radiation, and/or chemotherapy) and before they started endocrine therapy if planned. Patients were evaluated with neuropsychological tests, blood tests, and self-report questionnaires at entry and then 6 months and 12 months later.2 This observational cohort study provided detailed information about the recovery after primary breast cancer treatments as well as any additional effects associated with the initiation of endocrine therapy.

Follow-up on the first 93 patients enrolled found that circulating levels of the proinflammatory cytokine soluble tumor necrosis factor (TNF)-alpha receptor type 2 (sTNF-RII) was increased among patients who had received chemotherapy, but significantly declined the year after.3 The decline in sTNF-RII was significantly associated with reported improvement in memory.

In a substudy of participants, PET scans were done to evaluate brain metabolic function. “Women who had higher levels of TNF posttreatment were more likely to have decreased metabolism in the prefrontal area of the brain. As TNF declines, there was improved prefrontal activity,” Dr. Ganz reported. “This is a demonstration of the fact that systemic effects of treatment in the body also affect the brain.”

Dr. Ganz cited two additional reports from the Mind-Body Study that aimed at identifying who is at greater risk of persistent fatigue following cancer treatment. Among 103 women who recently finished primary treatment for early-stage breast cancer“increased levels of TNF are associated with greater fatigue severity in patients treated with chemotherapy,” she said. “Results also suggest that fatigue, sleep disturbance, and depression may stem from distinct biologic processes in posttreatment survivors, with inflammatory signaling contributing relatively specifically to fatigue,” the authors wrote.4

In 171 women, genome DNA wasassayedfor single nucleotide polymorphisms of three cytokine genes—ILB-511, IL6-174, and TNF-308.5 “Patients with more high-expression alleles had more severe fatigue and cognitive complaints,” Dr. Ganz reported. “The genetic risk index [the sum of the number of high-expression alleles from all three single nucleotide polymorphisms] is significantly associated with greater fatigue and cognitive changes. So, if you have ever wondered why some patients are getting through chemotherapy, radiation, and surgery just fine, no complaints, and somebody else is really tired after the same treatment, there is a genetic predisposition that we have shown in this study, as well as in other studies.”

Using longitudinal data in 186 patients from the Mind-Body Study, investigators tracked symptoms and quality of life after primary treatment and subsequent initiation of tamoxifen (n = 66), aromatase inhibitors (n = 66), or no endocrine therapy (n = 60).6 “We find that over the course of the year, tamoxifen-treated patients are improving in terms of physical function,” Dr. Ganz said. “The patients on an aromatase inhibitor have a slower recovery in terms of physical function after the primary treatment.”

I don’t want to take away lifesaving therapy, but the right treatment for the right person has to be the long-term issue.
— Patricia A. Ganz, MD, FASCO

Women who received no endocrine therapy rated their hot flashes as less severe, whereas those receiving tamoxifen rated hot flashes as more severe. “Women on [an aromatase inhibitor] were having increased musculoskeletal symptoms compared to women who had no endocrine therapy or tamoxifen,” Dr. Ganz said. Women on aromatase inhibitors rated their cognitive problems as worsening, whereas women who had no endocrine therapy rated cognitive problems as less severe, suggesting that once a woman finishes her primary treatment, adding a different therapy may not allow her time to recover and may worsen some symptoms.

An analysis of data from four large studies with a total of more than 3,000 women used an epigenetic biomarker of age, based on DNA methylation levels.7 “The results indicate that menopause may accelerate the epigenetic aging process in blood and that age at menopause and epigenetic age acceleration share a common genetic structure,” Dr. Ganz commented.

In another study reported in the Journal of Clinical Oncology, 209 patients with breast cancer and 106 controls were observed over time, and the authors found that “survivors treated with surgery, radiation, and chemotherapy accumulated a significantly greater burden of comorbid conditions and suffered greater pain associated with inflammation over time after cancer treatment than did the control group.”8 Patients receiving more than one mode of treatment “had higher cytokines and comorbidities, suggestive of accelerated aging.”

Dr. Ganz cited several studies showing that women treated for breast cancer had an increased risk of cardiovascular disease. Although primarily focused on environmental exposures, the Long Island Breast Cancer Study (1996–2009) presented “an opportunity to look at women who had breast cancer in the 1990s and received therapies that are less intensive than what we have today, and then compare them with case controls in the community,” Dr. Ganz explained.

Cardiovascular disease mortality included deaths from myocardial infarction, cardiac arrest, hypertensive heart disease, coronary artery aneurysm, and dissection. “Breast cancer survivors are at greater risk for [cardiovascular disease]-related mortality compared with women without breast cancer, and this increase in risk is manifested approximately 7 years after diagnosis,” the researchers concluded.9 Women with breast cancer had a higher risk of overall mortality for the first 6 years after diagnosis, but the overall mortality rates for those with and without breast cancer tended to converge thereafter. 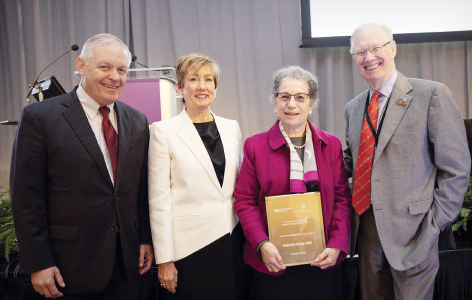 A large Canadian study looked at cardiovascular-related reasons for hospitalizations and emergency room visits among patients diagnosed with early-stage breast cancer. The 10-year incidence of cardiovascular disease hospitalization was 10.8% for the patients with breast cancer vs 9.1% in controls.10 “Interestingly, heart failure was not driving this. This was primarily atherosclerosis that was driving this,” Dr. Ganz remarked. “So, it is not related to likely exposures to anthracyclines.”

Estrogen has acute effects on the cardiovascular system and longer-term effects on atherosclerosis, vascular injury, and endothelial and smooth-muscle cell growth. “To the extent that we are perturbing those levels of estrogen in a woman’s body, as she has breast cancer treatment, we may be accelerating the longer-term effects of this process,” Dr. Ganz said.

In summary, Dr. Ganz noted that one common pathway for some of the comorbid conditions experienced by many patients with breast cancer is inflammation. “It certainly may be contributing to a modest increase in comorbid conditions, which in the long run might not be manifest until many years later,” she said.

“For women in their 30s, 40s, and even 50s who don’t have any other serious illnesses, physicians need to be concerned about accelerated aging,” Dr. Ganz continued. “If these patients are receiving very intensive therapy and endocrine treatment for a long period of time, it may be setting them up for some long-term effects, such as you see in children who have undergone cancer treatment,” Dr. Ganz said.

Dr. Ganz concluded with a call “to weigh the quality and quantity of survivorship related to breast cancer therapy.” Among the important considerations are the long-term nature of recommended therapies, chronic symptoms that can interfere with quality of life, and the potential for competing causes of death, especially in women for whom the risk for breast cancer recurrence is very low.

“I am completely in favor of treating everyone who needs therapy. I don’t want to take away lifesaving therapy, but the right treatment for the right person has to be the long-term issue,” she stressed. ■