The ASCO Post’s Integrative Oncology series is intended to facilitate the availability of evidence-based information on integrative and complementary therapies sometimes used by patients with cancer. In this installment, Gary Deng, MD, PhD, and Jyothirmai Gubili, MS, focus on the herbal extract boswellia, also known as Indian frankincense, which has shown anti-inflammatory activity and is of growing interest among many patients with cancer.

A tropical tree, Boswellia serrata is widespread in India, the Middle East, and North Africa. It is the source of “frankincense” or “olibanum,” a fragrant resin obtained from the bark. Frankincense is used in religious ceremonies in cultures around the world and is also valued for its medicinal properties. It is widely prescribed in Ayurveda (India’s traditional, holistic system of medicine) to treat diarrhea, dysentery, pulmonary disease, arthritis, coughs, sores, snakebite, ringworm, asthma, and for lowering cholesterol levels.

Boswellic acids, the major constituents of boswellia resin, have been reported to be responsible for many of the herb’s therapeutic effects. The supplemental form of boswellia is promoted for osteoarthritis, to maintain joint health, and to reduce inflammation. It is available in health food stores and online in the form of tablets, capsules, extracts, and as an ingredient in topical creams and ointments.

Preclinical studies have shown that boswellic acid, the bioactive constituent, has anti-inflammatory, antiarthritic,1 cytotoxic,2 and radio-enhancing properties.3 It also prevented intestinal tumorigenesis in a murine model,4 and may improve cognitive impairment and insulin resistance.5 The essential oil derived from boswellia demonstrated antimicrobial effects.6

Preliminary findings from small uncontrolled studies suggest the utility of boswellia for bronchial asthma,7 ulcerative colitis,8 mild irritable bowel syndrome,9 and osteomuscular pain.10 However, available data on boswellia’s effects against collagenous colitis are inconclusive,11-13 and it did not confer a significant benefit in maintaining remission from Crohn’s disease.14

In addition, a combination of boswellic acid and curcumin (350 mg of curcuminoids, 150 mg of boswellic acid, taken three times daily for 12 weeks) was also reported to be more effective in alleviating osteoarthritic pain-related symptoms than curcuminoids alone or placebo in a three-arm parallel-group randomized study (n = 201).17 Larger well-designed studies are needed for clinical recommendation.18

Boswellia has been investigated for its potential anticancer effects as well. In a study of 44 patients with primary or secondary malignant cerebral tumors undergoing radiotherapy, those assigned to a boswellia preparation (4,200 mg/d) had greater reduction in cerebral edema than did patients on placebo (P = .023) after radiotherapy.19

In another trial, 144 patients with breast cancer undergoing adjuvant radiotherapy were randomly assigned to receive a topical boswellia cream (2%) or a placebo cream, applied twice daily. More patients in the placebo group had intense erythema (visual intensity) than did those who used boswellia cream (49% vs 22%; P = .009). Further, the treatment was also reported to be effective with concomitant chemotherapy (P = .018).20

Physicians should be aware of the growing interest in boswellia products for the treatment of inflammatory conditions and their potential for interactions with some prescription drugs.

Look for products standardized to 60% boswellic acids. Be sure to check out a dosage recommendations chart for boswellia, which lists therapeutic dosages for specific ailments at a glance. Traditionally, boswellia is taken internally for 8 to 12 weeks, and the cream is used as long as needed. 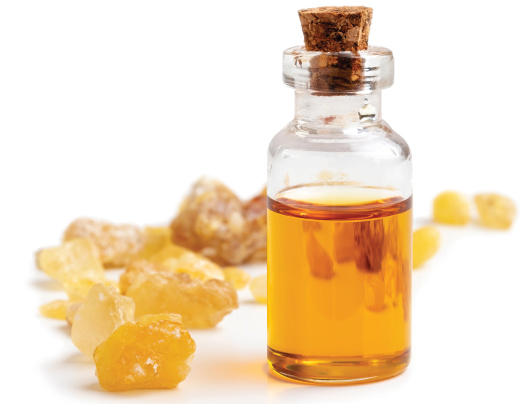 The clinical relevance of the previously mentioned interactions has yet to be determined.

Boswellic acid has shown anti-inflammatory activities in vitro. A few randomized controlled trials reported that formulations containing boswellia extract could reduce osteoarthritic pain, although the evidence is not definitive. A randomized controlled trial also showed that topical use of boswellia extract reduced radiation dermatitis. A few cases of mild adverse effects have been reported. Caution should be exercised when using boswellia in patients receiving anticoagulant or antiplatelet drugs.

23. Siemoneit U, Hofmann B, Kather N, et al: Identification and functional analysis of cyclooxygenase-1 as a molecular target of boswellic acids. Biochem Pharmacol 75:503-513, 2008.