Participants at the 2019 World Cancer Leaders’ Summit commit to improving access to quality cancer care for all.

This year’s meeting of the World Cancer Leaders’ Summit: Cancer and Universal Health Coverage, held on October 15–17 in Nur-Sultan, Kazakhstan, brought together more than 350 global health leaders, including ministers of health, first ladies, and industry leaders, from 82 countries to discuss how to achieve universal health coverage in every country by 2030. The 2030 date was set by the United Nations General Assembly in 2015, when it adopted the 2030 Agenda for Sustainable Development, which calls for accelerating equitable and sustainable progress toward realizing universal health coverage over the next decade. This commitment by world leaders was reaffirmed on September 23, 2019, when the United Nations Member States agreed to a political declaration on advancing universal health coverage to progressively cover 1 billion additional people with quality health-care services and affordable medicines by 2023 and an additional 2 billion people by 2030.1 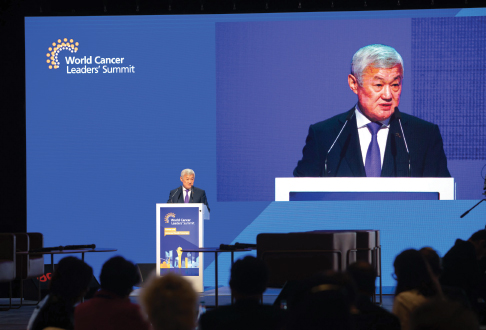 Berdibek Saparbaev, Deputy Prime Minister of the Republic of Kazakhstan, gives his welcoming address at the 2019 World Cancer Leaders’ Summit.

The goal of achieving universal health coverage comes at a time when, despite health gains over the past decade in increased life expectancy and the reduction of maternal and childhood mortality rates in low-resourced countries, there has been an exponential rise in deaths from noncommunicable diseases, including cancer, cardiovascular disease, diabetes, and chronic lung diseases. According to the World Health Organization (WHO), of the nearly 57 million global deaths in 2016, 40.5 million were due to noncommunicable diseases, including 9 million due to cancer, with over three-quarters of those deaths—31.5 million—occurring in low- and middle-income countries, where approximately 46% of those deaths occurred in people younger than age 70.2

According to the United Nation’s political declaration on meeting universal health coverage by 2030, as much as half of the world’s population lacks access to essential health-care services, and more than 800 million people spend at least 10% of their household income on health care, which pushes nearly 100 million people into poverty each year. Unless 2030 goals are met, affirmed the declaration, one-third of the world’s population will remain underserved, with no access to health-care services.1

During the 2019 World Cancer Leaders’ Summit, organized annually by the Union for International Cancer Control (UICC) and hosted this year by the Kazakh Institute of Oncology and Radiology, participants addressed the need to eliminate cancer as a life-threatening disease for future generations; discussed effective cancer prevention strategies and how to provide sustainable “people-centered” health-care systems in which no one is left behind; and exchanged views on how the various health-care sectors could form partnerships to design and deliver universal health coverage, especially to those living in low- and middle-income countries.

“The concept of universal health coverage as a human fundamental right is not new; it dates back to the Constitution of the World Health Organization in 1948,” said Sonali Johnson, PhD, Head of Knowledge, Advocacy, and Policy for UICC. “However, what is new is the political commitment countries are making, and now we have to implement that commitment into action.”

According to Dr. Johnson, the summit resulted in one major call to action that includes three key messages for governments and the global health-care community:

To improve equitable access to health care, in 2010, WHO published The World Health Report, which provided a systematic path to universal health coverage; it included three dimensions of coverage as the axes of a cube: population that is covered, services covered, and direct costs covered.5 However, the report acknowledged that fully realizing universal health coverage is challenging for many countries, and Dr. Johnson agreed.

“Countries have to make decisions, choices, and tradeoffs around which services they can include in their health plans; which populations are covered; and what financial resources they have to implement these plans,” stated Dr. Johnson. “These decisions are not easy when countries are facing a number of competing health priorities. Governments have to assess whether they can afford to fully or partially pay for services across the spectrum of conditions. All of these issues apply to cancer care interventions because they are often expensive and usually paid for out of pocket.”

To reduce these obstacles and decrease the cancer burden in low-income countries, the UICC has developed resources to help countries build and implement their own national cancer control plan, including the International Cancer Control Partnership portal (www.iccp-portal.org). The UICC has also collaborated with the American Cancer Society and the International Agency for Research on Cancer to produce the third edition of The Cancer ­Atlas (http://canceratlas.cancer.org), which provides countries with actionable data on effective interventions in cancer prevention, early detection, treatment, and palliative care.

Leaving No One Behind

Failure to achieve the goal of doubling health-care coverage set in the United Nation’s 2030 Agenda for Sustainable Development may result in leaving as many as 5 billion people without access to health care.4 Among the most vulnerable populations included in this figure are racial and ethnic minorities, patients in the lesbian, gay, bisexual, and transgender community, and those living in rural areas, according to Dr. Johnson.

“Governments have to assess whether they can afford to fully or partially pay for services across the spectrum of conditions.”
— Sonali Johnson, PhD

“Disparities in cancer incidence and outcome are not just visible among low-, middle-, and high-income countries, but also within countries, particularly where there is no universal health coverage and where individuals are not covered by health insurance,” explained Dr. Johnson. “When cancer care needs to be paid out of pocket, those who can afford treatment will have a better outcome than those who can’t afford treatment. We have to put in place specific strategies to make sure that no one is left behind, especially those in vulnerable populations. Universal health coverage cannot be achieved overnight—and maybe not over the next decade—but we can make progress. That is a goal we must achieve.”

DISCLOSURE: Dr. Johnson has an immediate family member who has been employed by Becton Dickinson.

4. WHO: Countries must invest at least 1% more of GDP on primary health care to eliminate glaring coverage gaps. Available at www.who.int. Accessed November 11, 2019.

May
13
Today In Oncology