A Need for Human Connection Led to a Rewarding Career in Geriatric Oncology for Lodovico Balducci, MD

Older adults are the fastest-growing segment of our population, and more than 65% of patients with newly diagnosed cancer are 65 years of age or older. Although we now recognize the special needs of older patients with cancer, the field of geriatric oncology emerged quietly, with early growing pains.

One of the first symposia conducted by the National Cancer Institute and the National Institute on Aging presented in 1983, entitled “Perspectives on Prevention and Treatment of Cancer in the Elderly,” set the tone for further discussions and research in this area. ASCO played a central role in advancing the field. In his 1988 ASCO Presidential Lecture, B.J. Kennedy, MD, one of the fathers of geriatric oncology, encouraged medical oncology to study aging and cancer as a unique discipline.

One of the first oncologists to galvanize the field of geriatric oncology during the 1980s was ­Lodovico Balducci, MD. He was co-editor of the first major medical textbook on the subject, ­Geriatric Oncology, published in 1992, and was honored with the first B.J. Kennedy Award for Scientific Excellence in Geriatric Oncology from ASCO.

Dr. Balducci was born on April 7, 1944, in Borgonovo, a small town in Northern Italy. World War II was in its final stages; Italy had capitulated the year before in 1943. After the war, his parents relocated to his father’s hometown of Rimini, where Dr. Balducci was reared until the age of 18. He told The ASCO Post that when he grew up, Italy was still a developing nation, devasted by years of war, and Rimini, in fact, was one the war’s most bombed European cities. This early experience in the human and structural ruins of war deeply affected Dr. Balducci’s world view and his later career.

“When I grew up, the town doctor and priest were revered among the people for their service to the spirit and body. Doctors were also the wealthiest of the professional class, so very early on during my school, I was captivated by the respect they commanded,” said Dr. Balducci.

Both of Dr. Balducci’s parents were professors in the humanities, providing a rich intellectual environment that nurtured Dr. Balducci’s desire to follow in their footsteps. However, he described himself as having a somewhat withdrawn personality; recognizing this, Dr. Balducci decided that a career in medicine, in which he’d be forced to interact with people on an intimate level, would be a healthier, more fulfilling choice than academia.

So, with the full support of his parents, Dr. Balducci went to Rome, where he attended medical school at Catholic University. “A public university might have a graduation class of 4,000, whereas Catholic University had very strict acceptance criteria and graduated 150 medical students per year. However, it offered a much better chance for career advancement than public school,” according to Dr. Balducci.

To the United States for Training

At the time, medicine in Italy was still struggling with post-war issues, leaving it behind the United States in terms of medical practice and science. Seeking the best possible training, Dr. Balducci decided to move to the United States and begin a career in medicine. There were a few obligations before relocating: First, he had to pass an English language exam before being accepted to an American institution, and second was obligatory military service. During that period of learning English and serving in the army, he met a young woman, also a doctor, whom he later married.

When the young couple finally left Italy in 1972, their first stop was a small private hospital in Winnipeg, Canada, called Misericordia General Hospital. While working at the hospital, opportunity knocked by way of a job opening at the University of Mississippi Medical Center. The Balduccis left Canada and traveled to Jackson, Mississippi, which was quite a radical culture shift for the young European couple.

“I received very good training at the University of Mississippi, but it was a very heated and difficult period in the civil rights movement, and Mississippi was in the middle of it. However, everyone I knew tried to go out of their way to be decent,” said Dr. Balducci.

Although oncology was in its formative years in the 1970s, an inspiring presentation by J. Tate Thigpen, MD, the renowned hematologist, sparked an interest in the field for Dr. Balducci. “I applied for and was accepted for a fellowship at MD Anderson Cancer Center. However, for a number of reasons, I chose to stay in Mississippi and immediately began working in the laboratory researching hematopoietic stem cells,” he said. 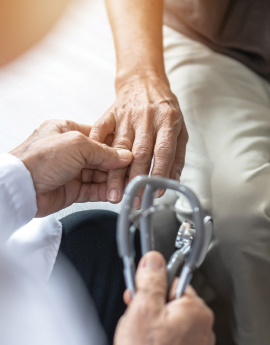 In addition, Dr. Balducci began working at the Veterans Affairs (VA) Medical Center, and that’s where his career epiphany moment took place. “While at the VA, I realized that my true strength as a physician was not in procedure-based practice, but rather in using human interaction skills to care for older patients with cancer, who were the most vulnerable of all. I guess it worked into my subconscious, because a rather quick conversion took place; I realized that older patients with cancer had their own set of needs different from those of younger patients. It was then that I decided my career would be in geriatrics,” revealed Dr. Balducci.

During his time working at the VA, Dr. Balducci published extensively on geriatric oncology, which caught the eye of John C. Ruckdeschel, MD, the new Chief Executive Officer of Moffitt Cancer Center in Tampa, Florida. “Dr. Ruckdeschel invited me to join Moffitt. I agreed on the condition that he let me start my own geriatric oncology program. He was very enthusiastic about it and gave me the green light. So, I went to Moffitt, began my own program, and stayed there throughout my career, never regretting it for a moment. Moffitt provided a rich collegial atmosphere, and Tampa is a great place to live,” Dr. Balducci added.

A Small but Dedicated Group

To put Dr. Balducci’s pioneering work in geriatric oncology into perspective, his initial geriatric program at Moffitt was the nation’s first in the field. Along with other giants in the field such as Drs. B.J. Kennedy, Hyman Muss, Martine Extermann, Stuart Lichtman, and William Hazzard, Dr. Balducci was at the vanguard of the movement that forged the discipline of geriatric oncology, improving the quality of life and outcomes for older patients with cancer.

“I went to Moffitt, began my own program, and stayed there throughout my career, never regretting it for a moment.”
— Lodovico Balducci, MD

The ASCO Post recently caught up with Dr. Balducci, who has retired from Moffitt but has not slowed down a bit, dedicating much of his time to writing and the study of biblical theories in a literary context. Asked to reflect on his pioneering career in geriatric oncology Dr. Balducci said: “From early on in my career, I became more interested in patients themselves than the disease they were suffering from. What exists for the doctor is the patient in front of us, each with a different set of characteristics from the molecular composition of the cancer and his or her unique personality.”

Dr. Balducci noted that he was fortunate in having three female role models who inspired the way he practiced medicine. “One is my wife, Claudia, who has been Chief of Geriatrics at the local VA for about 25 years. She exemplifies the doctor who treats the whole patient with compassion and understanding. The second is Dr. Kathy Foley, who has devoted her life’s work to easing the suffering of patients with cancer in pain. The last is Dr. Patty Ganz, who has gone beyond the psychological questionnaire and truly developed methodologies to enhance the quality of life for our patients with cancer.”

Dr. Balducci believes the major challenge facing geriatric oncology continues to be the assessment of disease complexity in older patients with cancer. To elaborate, he then shared a short lesson in ­Latin, explaining the difference between complicated and complex.

“From early on in my career, I became more interested in patients themselves than the disease they were suffering from.”
— Lodovico Balducci, MD

Asked about his retirement days away from the long hours at Moffitt, Dr. Balducci commented: “I puzzled about different things to do after I retired: one thing, believe it or not, was becoming a hospital chaplain, because I’ve always been interested in medicine and spirituality. But reality knocked, and two things now occupy most of my time. One is taking care of my grandchildren, which is a joy. And the second is following my passion for writing. I wake up early, go to mass, come home, and write for the better part of the day: poems, theatrical pieces, and short novels. Life is good.”