Steven A. Rosenberg, MD, PhD, knew from the start of his medical career that if treatments for cancer were to become curative, research in new therapies would have to move away from the mainstay one-size-fits-all approach of systemic chemotherapy to an innovative, personalized strategy that utilizes the patient’s own immune system to thwart the disease. He has spent the past 44 years as Chief of the Surgery Branch at the National Cancer Institute (NCI) in pursuit of an immunotherapeutic blueprint for the treatment of common cancers based on each cancer’s mutations, rather than cancer type. And, indeed, immunotherapy is now considered the fourth pillar in cancer treatment, following surgery, chemotherapy, and radiation therapy.

Born in the Bronx, New York, on August 2, 1940, Dr. Rosenberg’s love of science took root early in his life. “As soon as I stopped wanting to be a cowboy at the age of 5, I knew I wanted to be a physician—and not just a physician, but a medical researcher, as well,” said Dr. Rosenberg.

After graduating from the prestigious Bronx High School of Science in 1956, Dr. Rosenberg attended Johns Hopkins University, where he received a bachelor’s degree in biology in 1961 and a medical degree in 1964. He then obtained a doctorate in biophysics from Harvard University in 1968.

“I wanted to study biophysics to increase my scientific background, so that when I did begin to perform independent research, I would have the base of knowledge I needed to pursue more than the practice of today’s medicine. I wanted to help create the medicine of tomorrow,” said Dr. Rosenberg. “Early on, it became clear to me that available methods for treating widely metastatic disease were not adequate. We needed a new approach to systemic treatment, and I became very interested in immunotherapy.”

Dr. Rosenberg’s early research in immunotherapy began soon after he completed his residency training in surgery, in 1974, at Peter Bent Brigham Hospital in Boston, and his subsequent arrival at the NCI. “On the last day of my residency training, I remember sleeping in the residents quarters with a bare light bulb hanging from the ceiling. The next day, I was appointed Chief of Surgery at the NCI,” recalled Dr. Rosenberg.

We’re essentially developing a new drug for every patient, and that’s what it might take to substantially improve cure rates in this disease.
— Steven A. Rosenberg, MD, PhD

When Dr. Rosenberg began his pioneering research in adoptive cell transfer in the mid-1970s, he hypothesized that if the immune system could be stimulated using a new T-cell growth factor cytokine, interleukin (IL)-2, it might cause an immune reaction against cancer. “When I began this work, there was no evidence that there was an immune response to cancer in humans at all,” said Dr. Rosenberg. “There were no known cancer antigens, and it was not known whether T cells could be used for any kind of immunotherapy. We were working to determine whether it would ever be possible to use the immune system to treat cancer.”

He would soon get his answer. Dr. Rosenberg began laboratory studies in tumor-bearing mice to test whether IL-2 could generate cells with anticancer activity to kill the malignant cells. He then moved the therapy into clinical trials in patients with advanced cancer who had exhausted all other viable treatment options.

IL-2 failed to generate an immune response capable of causing cancer regression in the first 66 patients in the studies—all of whom eventually died from their cancer. But in 1984, Dr. Rosenberg treated his 67th patient, a woman with metastatic melanoma, with an altered regimen of high-dose IL-2, which put the patient in a durable remission that has lasted over 3 decades.

“That was the first evidence that a purely immune manipulation could cause cancer to disappear, as IL-2 only affects the immune system. It has no direct impact on the cancer itself, because cancer does not have IL-2 receptors,” explained Dr. Rosenberg.

The results from Dr. Rosenberg’s IL-2 clinical studies1,2 and other multi-institutional trials led to the first U.S Food and Drug Administration (FDA) approval of an immunotherapy, in 1992, for the treatment of metastatic renal cell carcinoma. (Decades later, IL-2 remains the only systemic treatment that has been shown to cure some patients with the disease.) In 1998, IL-2 was approved for the treatment of metastatic melanoma.

Once Dr. Rosenberg learned that IL-2 was capable of generating an immune response by stimulating the body’s T cells, he began studying T lymphocytes isolated from the tumors of patients with metastatic melanoma and identified immune cells in the tumors called tumor-infiltrating lymphocytes. These T lymphocytes appeared to be the central component of the body’s immunologic defense against cancer.

“What better place to look for a cell doing battle against a cancer than within the cancer itself? We studied these tumor-infiltrating lymphocytes and now know much more than we ever did before,” he said.

In a series of clinical trials, Dr. Rosenberg extracted tumor-infiltrating lymphocytes from the tumors of 195 patients with advanced melanoma, expanded their numbers in the laboratory, and infused them back into the patients. With a median follow-up of over 6 years, 24% of these patients have achieved durable complete remissions.3

“This is a single, living treatment. When we use tumor-infiltrating lymphocytes in patients with melanoma, we can get very dramatic results. What is the basis for that? We’ve completed studies showing that melanomas have many mutations, and the T cells we were administering were recognizing the products of these unique mutations in that cancer. Since all cancers have mutations, it seemed reasonable that targeting those mutations might be effective for a variety of tumor types,” said Dr. Rosenberg. 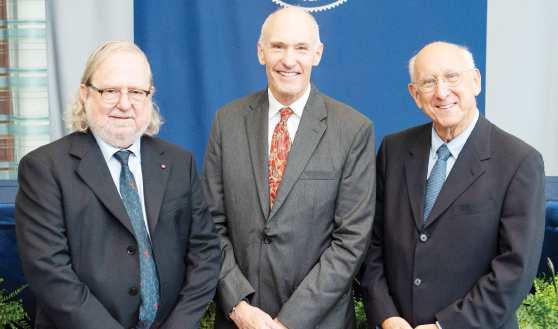 In August, Dr. Rosenberg (right) was awarded the 2018 Albany Medical Center Prize in Medicine and Biomedical Research for his research in the development of immunotherapy for the treatment of cancer. With him are his co-recipients of the award Nobel laureate James P. Allison, PhD (left), Chair of the Department of Immunology; Director, Parker Institute for Cancer Research; and Executive Director of the Immunotherapy Platform at The University of Texas MD Anderson Cancer Center; and Carl H. June, MD (center), Richard W. Vague Professor in Immunotherapy, Department of Pathology and Laboratory Medicine; Director, Center for Cellular Immunotherapies; and Director, Parker Institute for Cancer Immunotherapy, Perelman School of Medicine, University of Pennsylvania. Photo credit: Albany Medical College. 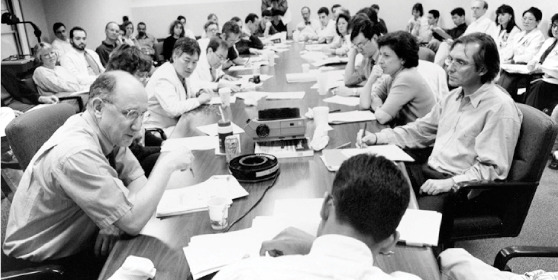 To determine whether the immune system frequently mounts a T-cell response against mutations expressed in common epithelial cancers, Dr. Rosenberg and his colleagues used a next-generation sequencing approach coupled with high-throughput immunologic screening in 10 patients with metastatic gastrointestinal cancers to ascertain the mutations in their tumors. They found that the tumor-infiltrating lymphocytes extracted from 9 of the 10 patients contained CD4-positive and/or CD8-positive T cells that recognized 1 to 3 neoepitopes derived from somatic mutations expressed by the patient’s own tumor.4

“Using the patient’s own cells to treat the patient’s own cancer is a blueprint for treating cancer. Since all cancers have mutations, targeting the unique mutations in a patient’s cancer represents an exciting new area of cancer immunotherapy,” Dr. Rosenberg said. “It is somewhat daunting, because all of the antigens that are recognized are unique to each patient’s cancer, with rare exceptions. So this approach to treating cancer is about as highly personalized as you can imagine.”

He continued: “We are seeing dramatic regressions in about 15% of patients with common epithelial cancers that are unresponsive to all existing therapies. We are working hard to improve upon this type of immunotherapy for patients with a variety of cancers. We’re essentially developing a new drug for every patient, and that’s what it might take to substantially improve cure rates in this disease.” It’s ironic, he added, that the mutations that cause cancer may actually turn out to be cancer’s Achilles heel, enabling more effective treatments and more cancer cures for more patients.

Encouraged by these findings, Dr. Rosenberg next began exploring how to use the immune system to treat hematologic cancers. He and his team were the first to demonstrate the success of adoptive T-cell therapy with anti-CD19 chimeric antigen receptor (CAR)-expressing T cells for treating advanced B-cell malignancies.5

The results from Dr. Rosenberg’s clinical trials, as well as subsequent clinical studies by Carl H. June, MD, of the University of Pennsylvania, among others, led to FDA approval, in 2017, of the first two CAR T-cell therapies: tisagenlecleucel (Kymriah), for the treatment of relapsed or refractory pediatric and young adult acute lymphoblastic leukemia, and axicabtagene ciloleucel (Yescarta), for the treatment of several types of relapsed or refractory large B-cell non-Hodgkin lymphomas. Earlier this year, the FDA also approved tisagenlecleucel for the treatment of adult relapsed/refractory large B-cell lymphomas.

To ensure the continued momentum of cancer advances, Dr. Rosenberg is dedicated to training the next generation of scientists and has mentored about 400 fellows during his more than 4 decades as Chief of Surgery at the NCI. He said the most often asked question he gets from his mentees is, What does it take to have a successful research career? In response, he offers two pieces of advice: be passionate about your work, and maintain laser-like focus on accomplishing your goals.

“The second factor is that you need to have a -laser-like focus on a goal for your research. Some people have described basic research as shooting an arrow into the air, and where it lands, painting the target. That’s not how we do it in translational medical research. Here we use laser-like focus to solve difficult problems confronting people with cancer,” said Dr. Rosenberg.

The Medicine of Tomorrow

Dr. Rosenberg concedes that his passion and laser-like focus on his research, along with his dedication to his patients, have meant spending less time with his wife of 51 years, Alice, and their 3 daughters. “There were probably 40 days over the past 40 years that I haven’t been in the hospital checking on research results or seeing patients, and to be able to devote that much time to work requires an understanding family,” he said. “I’ve been extraordinarily lucky. I have an incredibly supportive wife and three wonderful daughters. I’ve also been lucky enough to love what I do, so every day that I come to work is an exciting day for me.”

He concluded: “Many years ago, I set out to do more than practice today’s medicine, and I’m hoping that as I continue this work, advances can become part of the medicine of tomorrow. That’s what I’ve been trying to do for the past 40 years and will continue to do for as long as I can. Frankly, after all this time, I feel like I’m just finally getting the hang of this,” said Dr. Rosenberg. ■