I took a chance on an experimental therapy to have more years of productive life. But I was also prepared to die.

The combination of symptoms I began experiencing in the spring of 2007, including night sweats so severe they woke me from a sound sleep and midline chest wall swelling so extreme I needed a larger shirt size, drove me to seek immediate medical attention. A series of imaging and blood tests confirmed that I had chronic lymphocytic leukemia (CLL). My oncologist recommended standard chemotherapy for the cancer, which he said was likely to give me a long, durable remission, possibly for 10 to 15 years.

Unfortunately, just months into my remission, I was diagnosed with salivary gland carcinoma, which was successfully treated with photodynamic therapy, and a few months later I learned that the CLL had recurred. My remission had lasted just 18 months. Now I knew treatment to get me into a second remission would be more aggressive, and my chances to maintain a long-lasting remission were less certain.

Still, I approached this setback with the same level of optimism I brought to my original diagnosis. At age 78, I wanted those next 10 to 15 years and was willing to do what was necessary to get back my life.

Taking a Chance on Experimental Therapy

I UNDERWENT eight rounds of R-CHOP (rituximab [Rituxan], plus cyclophosphamide, doxorubicin, vincristine, and prednisone), and the side effects were predictably harsh: fatigue, hair loss, a series of infections, and muscle and weight loss. However, despite the overwhelming firepower of my treatment, I was able to achieve just a partial response. The cancer was progressing, and my oncologist delivered the ominous news: “I’m running out of bullets,” he said.

My son, Craig, happened to read about a clinical trial underway at the Abramson Cancer Center at the University of Pennsylvania, which was investigating CD19 chimeric antigen receptor (CAR) T-cell therapy in patients with CLL. The experimental therapy had proved successful in putting three heavily pretreated patients with cancer into complete remission, which was still ongoing 1 year later, and I thought perhaps this treatment could be the cure that had been so elusive for me. But I also worried that the advanced stage of my cancer and my advancing age would prohibit my participation in the study.

My oncologist contacted the lead researcher of the CAR T-cell clinical trial, David Porter, MD, Jodi Fisher Horowitz Professor in Leukemia Care Excellence and Director, Allogeneic Bone Marrow Transplantation and Immunotherapy at the University of Pennsylvania, to see whether I was eligible for the trial, and within weeks I had an appointment for a consultation.

Betting Against the Odds

WHEN I FINALLY met with Dr. Porter, in the spring of 2012, I was finishing my last round of R-CHOP. I was so weak from its side effects that a nurse at the Abramson Cancer Center offered me a wheelchair, but I was determined to walk into Dr. Porter’s office unaided. If I regained my strength over the next couple of months, said Dr. Porter, I could join the trial.

“I’m happy I was able to contribute to the research that has cured my cancer and informed the way patients with CLL and potentially other cancers are treated with CAR T-cell therapy.”
— Walter Styer

I was grateful to have this opportunity at the chance, however slim, of attaining a cure, but I knew the treatment was risky. At the time of my enrollment, I was just the tenth patient with CLL to receive CAR T-cell therapy—and the oldest— and most of the patients relapsed soon after the therapy.

Even though the odds were against me, I was consoled by the knowledge that whatever happened, whether I lived or died, it was a win-win for me. I have a strong faith: as much as I wanted to have many more years to spend with my wife, Sarah, our four children, six grandchildren, and six great grandchildren (and another on the way), I was prepared to die.

IN THE SUMMER of 2012, I underwent two adoptive transfers of autologous CTL019 cells about 2 months apart. Following the first infusion, I experienced all the symptoms of cytokine-release syndrome associated with the therapy, including high fevers, chills, and coughing, which were resolved after administration of interleukin 6 (IL-6) receptor–blocking therapy, but none of its benefits. Within 6 weeks, my leukemia became progressive again. 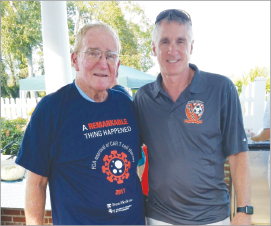 Dr. Porter, concerned that the blockade of IL-6 may have diminished my response to the CAR T-cell therapy, asked whether I wanted to give a second dose of the treatment a try. With nothing to lose— either this was going to work or I was going to heaven—I said that I absolutely wanted to be re-treated with my CAR T cells.

Seventy days after my first infusion, I received the remainder of my CAR T cells and once again suffered severe cytokine release-syndrome. My temperature shot up to 105°F, and I was admitted to the intensive care unit and packed in ice to bring down my fever. This time, the cytokine-release syndrome resolved without the addition of IL-6, but an evaluation of my bone marrow 1 month after the T-cell infusion showed that I wasn’t responding to the treatment. I had extensive infiltration of CLL in my blood and bone marrow, and an imaging scan found a large mass in my abdomen.

Dr. Porter worried that the cancer was transforming into a more aggressive leukemia, and we discussed the possibility of enrollment into other clinical trials. But soon after, I was again admitted to the intensive care unit with a high fever, and my organs started to fail, along with my resolve. I told my daughter, Carole, that I was suffering, and my faith began to falter.

Then, unexpectedly, signs began appearing that the CAR T cells were doing their job. Blood tests and next-generation sequencing found I had T-cell expansion in my peripheral blood and complete elimination of my tumor burden. My CLL was regressing.

TESTING BY Dr. Porter and his colleagues has found that my miraculous response to CAR T-cell therapy is the result of the action of a single, original CAR T cell and the disruption of the TET2 gene, which allowed the single CAR T cell to expand massively.1 To this day, CAR T cells are present in my immune system.

I’m grateful to Dr. Porter and my entire medical team for the extraordinary care they gave me, not just as a patient but as a human being. And I’m happy I was able to contribute to the research that has cured my cancer and informed the way patients with CLL and potentially other cancers are treated with CAR T-cell therapy.

Each year, my family and I host a fall harvest party, and we invite Dr. Porter and members of his team to enjoy the day with us. We are always humbled and amazed that they would give up part of their weekend to join us at this event.

Without Dr. Porter’s care and the prayers of my family and friends, I wouldn’t be here. They gave me back my life, and I’m enjoying every day. ■