A Pediatric Oncologist Recounts 7 Years at a Hospital in Jerusalem

Elisha Waldman, MD, is a pediatric oncologist and Associate Chief in the Division of Palliative Care at the Ann and Robert H. Lurie Children’s Hospital in Chicago. He grew up in a Connecticut suburb, the son of a conservative rabbi. Early on, Dr. Waldman majored in religious studies and felt spiritually nurtured by his faith. Doubts of faith began when he became a doctor, confronting suffering and death on a daily basis.

In 2007, when in his mid-30s, he was offered a job as attending physician at Jerusalem’s Hadassah Medical Center. He accepted and emigrated to Israel. He spent 7 years tending to young patients, who included Israeli Jews and Arabs, as well as Palestinians from the West Bank and Gaza. He has compiled his experiences during that time in an engrossing memoir, This Narrow Space: A Pediatric Oncologist, His Jewish, Muslim, and Christian Patients, and a Hospital in Jerusalem. 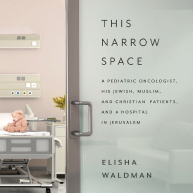 A Search for Purpose

THIS IS a book not only about a doctor’s search for deep inner meaning, but also about the admixture of cultures and religions and prejudices that have been simmering—at times boiling over—in Israel and its neighbors. Although Dr. Waldman knows Israel well, having spent time there as a youth and attending medical school in Tel Aviv, this adventure is new, taking him into uncharted waters.

When Dr. Waldman arrives at Hadassah Medical Center, he is gripped by a powerful out-of-body experience; he feels that he’s been here before, or at least that it’s a place he knows in his dreams.

His role at Hadassah is to oversee the care of children with sarcomas. On his first day at the center, the author finds himself worrying about language barriers, cultural nuances, and how to handle delivering bad news to families. But as he will describe eloquently throughout this well-written, moving memoir, people with cancer share a common bond that supersedes cultural differences.

He writes, “As I make my way down the corridor, the first thing I see is two boys, … sitting along-side each other, playing at a low table in the waiting area. In one poignant snapshot they capture all of my Zionist ideals. They would be indistinguishable from any other kids their age except for the fact that they both have the shiny, immaculate bald scalps that are the unmistakable by-products of chemotherapy treatments.”

ONE OF Dr. Waldman’s first patients is a lovely 17-year-old Israeli Arab girl named Lena, whom he diagnosed with osteosarcoma. This Jewish doctor must break the bad news to Lena and her parents, who are devout Arab Muslims. This is a terrific part of the story, because it peels away the layers of biases that separate people. Dr. Waldman nervously prepares himself, making sure there are tissues on the table, for the tears that might follow the bad news.

“What choice do we have but to hope? If we stop hoping, all is lost.”
— Elisha Waldman, MD

As they enter, I try to compensate for the language barrier by smiling and giving them a hearty ‘shalom.’ I come around from behind the desk and stick my hand out in greeting. Lena, limping, lags behind, so her mother is the first person to whom I offer my hand. She stares at it awkwardly, and everyone stops, unsure what to do. It takes a moment for me to register that both she and her daughter are wearing hijabs, and that for them physical contact with any man other than immediate family members is prohibited. Lena’s father kindly rescues us, dodging around his wife and thrusting his hand into mine, pumping it firmly….

The next three pages, as Dr. Waldman describes how he painstakingly told the family about Lena’s cancer diagnosis, are riveting. After an Arabic-speaking social worker arrives to help with any language issues, the impact of a cancer diagnosis is perfectly described with this passage: “Lena does not speak. Her mother, wide-eyed, lips trembling, fingers working a tear-soaked tissue to shreds, radiates waves of desperation as she speaks—no translation is necessary.” Oncologists reading this clinical episode will undoubtedly revisit tough discussions of their own.

A Window Into Oncology and Humanity

EACH CHAPTER in This Narrow Space opens a window into oncology and the vulnerable patients who depend on their doctors. And as time goes on, the author’s patient roster includes more and more children with a low likelihood of cure. Dr. Waldman is a man of faith, but it takes its toll.

One of the most charming chapters is titled “Silence.” Patients being told they have cancer often fall silent. At first, those moments made Dr. Waldman anxious, feeling the need to say something. Then he learned the “importance of simply sitting there, of just being present.”

In a book about Israel, there is always the chance that war might erupt, and one does in This Narrow Space. An ugly murder of three young Jews by Palestinians, then Jewish retaliation, equally ugly, precipitates a short, violent war, as Dr. Waldman soldiers on in the clinic. When a frazzled nurse asks him how he remains so calm, he replies, “What choice do we have but to hope? If we stop hoping, all is lost.”

This powerful book is highly recommended for readers of The ASCO Post. ■