The text and photograph on this page are excerpted from a four-volume series of books titled Oncology Tumors & Treatment: A Photographic History by Stanley B. Burns, MD, FACS, and Elizabeth A. Burns. The photo below is from the volume titled “The X-Ray Era: 1901–1915.” The photograph appears courtesy of Stanley B. Burns, MD, and The Burns Archive. To view additional photos from this series of books, visit burnsarchive.com.

This image of fluoroscopy documents modern cancer diagnostic possibilities. It is in startling contrast to the photograph of fluoroscopy taken a decade earlier. Published by James T. Case, MD, in 1914 to illustrate his book Stereoroentgenography of the Alimentary Tract, it presents the advances in medicine and radiology 19 years after the discovery of the x-ray. The white medical dress of the personnel, the attendant nurse assistant, and the use of barium portray scientific professionalism and confidence.

Improving the X-Ray Process Over the Years

SCIENTISTS AROUND the world constantly attempted to improve the x-ray process. By the end of 1896, 44 books and over 1,000 papers had been written [on the subject]. Thomas Edison developed the “fluoroscope,” whereas other innovators developed intensifying screens and diaphragms to help sharpen the images. In 1896, Elihu Thomson, a physicist at the General Electric Company, described his invention of the Roentgen stereoscope in The New York Electrical Journal. This process not only created the ability to see inside the body but to do so three dimensionally! This technique became a very important medical tool.

In 1897, Levy-Dorn incorporated this stereoscopic technique into the photography of surgical conditions. Another early contribution was made in 1898, when Francis H. Williams, MD, discovered bismuth subnitrate. He recognized its use as a safe contrast medium for the examination of internal organs, the alimentary tract, and joint sinuses. This material was a significant aid in the diagnosis of cancer.

In 1913, two new innovations provided the impetus for the rapid advancement of radiology. In that year, engineer William David Coolidge, PhD, invented the modern high vacuum, hot cathode, tungsten-target x-ray tube. Dr. Coolidge, unlike the pioneers who first experimented with the x-ray, lived to the ripe old age of 102, dying in 1975. 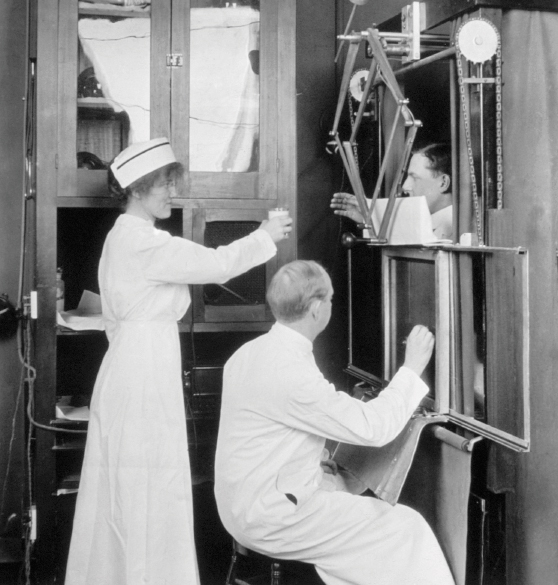 The new tube was safe; it did not use gas and delivered a pure electron charge, eliminating the serious problem of “scattering.” Scattering occurred when the primary rays from the tube struck the atoms in the patient’s body and emitted a secondary ray, causing blurry images and prolonged exposure times. Also in 1913, Berliner Gustav Bucky, MD (1880–1963), invented a grating diaphragm, which collimated the rays, producing better contrast and definition. These x-rays can be identified by their grid pattern. In 1920, American Hollis Potter, MD, further improved this technique by making the grid movable. The movable action erased the image of the grid from the film. By the time this photograph was taken in 1914, radiology had advanced significantly and had become a necessary diagnostic tool and therapeutic agent.

IN THE PHOTO, Dr. Case demonstrates a vertical roentgenoscope fitted with an attachment for making stereoroentgenograms. The patient stands between the tube and the screen. The observer sits in front of the screen, his left hand manipulating the movements of the tube and diaphragm and his right hand being free for recording upon the glass various phases of the fluoroscopic examination. To the observer’s left is a “buffet,” which serves for mixing the bismuth... (and) for the storage of special tubes, telephone, tracing papers, gloves, manipulating devices, etc.

A foot switch is a very necessary convenience. When the switch is opened, the overhead light in the room is on; when the switch is closed, the movement of the foot automatically throws the room into darkness and at the same time turns on the current in the tube. The overhead light may be a dim white light…. The writer’s preference is a blue incandescent lamp inside of a yellow globe. The effect is a sort of moonlight, which is very agreeable. ■