Although most Americans, 78%, recognize that smoking is a major risk factor for cancer, just 31% say obesity—the second-leading preventable cause of cancer after smoking—is a risk factor for the disease, according to the results of ASCO’s National Cancer Opinion Survey, which polled over 4,000 Americans and was published in October.1 Equally troubling is the number of respondents, 70%, who said cost is the main barrier to quality oncology care.

This survey confirmed that many Americans have a real financial hardship in managing the cost of cancer and are taking drastic measures to reduce their cost.
— Richard L. Schilsky, MD, FACP, FASCO

Also concerning in the survey’s findings is of the 195 cancer survivors polled, 56% said they were very or somewhat concerned they could afford treatment. In addition, 16% of patients said they skipped doctor’s appointments; 9% skipped doses of their medications; 6% refused treatment; 13% postponed filling or did not fill prescriptions; 11% ordered medications from sources outside the United States; and 8% admitted to cutting their pills in half to save money.

“We were aware of the financial burden cancer poses for many patients, but this survey confirmed that those with a direct experience with cancer either personally or through a loved one’s cancer diagnosis have real financial hardship in managing the cost of cancer and are taking drastic measures to reduce their cost, including skipping doctor’s visits, not filling prescriptions, and cutting pills in half,” said Richard L. Schilsky, MD, FACP, FASCO, ASCO’s Chief Medical Officer and Senior Vice President of the Center for Research and Analytics. “And we are beginning to recognize that these drastic measures are associated with adverse health outcomes, including decreased likelihood of responding to treatment and increased cancer relapse rates.”

In addition to the lack of awareness by survey respondents of the cancer association with overweight and obesity—a new report from the Centers for Disease Control and Prevention finds being overweight and obesity are linked to 13 types of cancer, accounting for about 40% of all cancers diagnosed in the United States2—just 31% recognized that alcohol was a cancer risk factor despite the fact that alcohol is linked to several cancers, including mouth, throat, esophagus, liver, colon and rectum, and breast. And only 20% recognized viruses as a risk factor for cancer.

Now we have data from average Americans who are sending a clear message to Congress to invest more funding in cancer research.
— Richard L. Schilsky, MD, FACP, FASCO

“People are gaining awareness about the link between the human papillomavirus [HPV] and several cancers because of the HPV vaccine, but there are other viruses like hepatitis B and C and Epstein-Barr that are also known causes of cancer. Fortunately, there are vaccines available that can completely prevent the development of some of these virally mediated cancers. However, vaccines can’t prevent these cancers if people are not getting vaccinated either because of lack of awareness of the cancer risk or choice,” said Dr. Schilsky.

The results from ASCO’s National Cancer Opinion Survey also highlight the discrepancy between the public’s awareness of cancer risk factors and the actions they take to reduce those risks. For example, although 66% of respondents correctly identified sun exposure as a cancer risk factor, only 48% said they use sunblock or limit their exposure to the sun. In addition, just 50% said they eat plenty of fruits and vegetables, and 48% said they exercise regularly to prevent cancer. And although three-quarters of respondents identified family history and hereditary factors as a top cause of cancer, most have not had or are not likely to consider having a genetic test, 81% and 58%, respectively.

Among the most surprising results in ASCO’s opinion survey is the overwhelming number of Americans, 91%, who said it is important for the government to dedicate substantial funding for research in the prevention and treatment of cancer, even if it means paying higher taxes or incurring increases in the budget deficit. Majorities of Americans also support changes in public policy that would allow Medicare to negotiate prescription drug prices with drug manufacturers, 92%; changes to the U.S. Food and Drug Administration to speed approvals of generic versions of cancer drugs, 89%; regulation on drug pricing to lower cost, 86%; and the purchase of cancer drugs from pharmacies outside the United States, 80%. 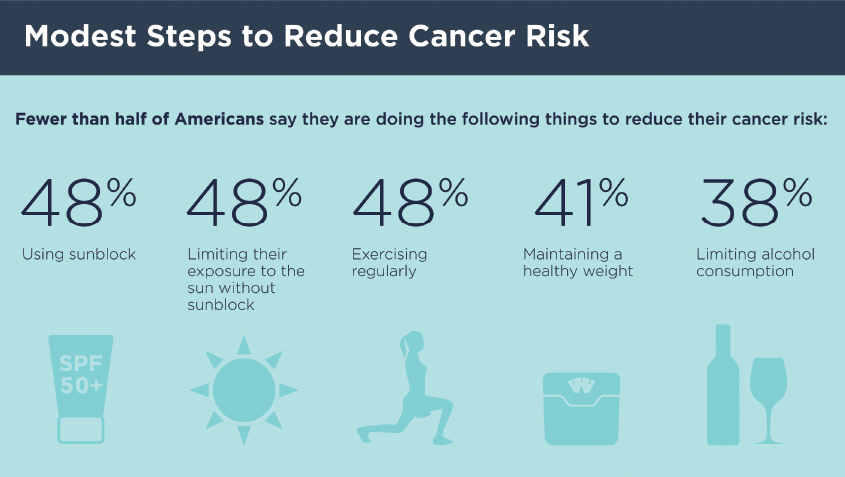 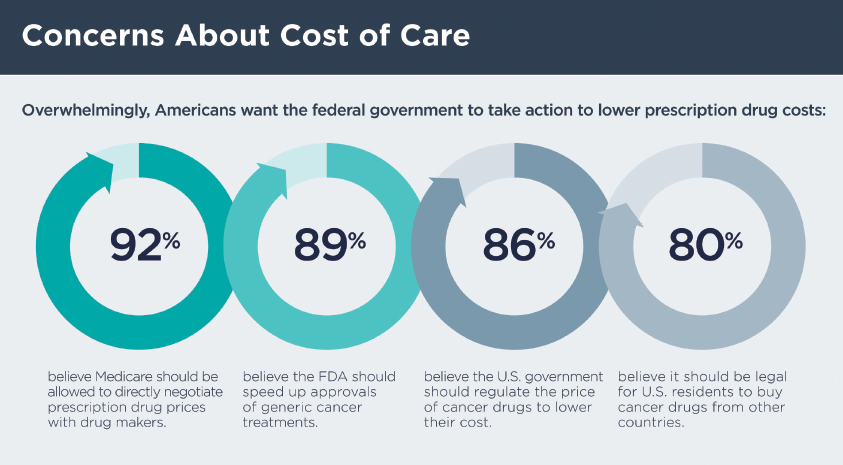 “It is encouraging to see that Americans are staunchly behind public investment by the government in cancer research, even if it means we will have to pay more in taxes or that it adds to the deficit,” said Dr. Schilsky. “Every year, we go to Capitol Hill as Congress is developing its budget to advocate for strong support of the National Institutes of Health and the National Cancer Institute. The results from our survey will only strengthen our advocacy efforts because now we have data from average Americans who are sending a clear message to Congress to invest more funding in cancer research. Hopefully, these data will be even more persuasive than just our testimony on the importance of increased funding.”

Hopes and Fears About Cancer

The survey results also showcase a mix of hope and fear among Americans about cancer. Although a large majority of respondents, 79%, are optimistic that most cancers will be cured within 50 years, only 39% said most cancers will be cured within the next decade. Among the greatest worries respondents expressed about a cancer diagnosis were suffering and being in pain, 58%; dying, 56%; being a burden, 52%; experiencing treatment side effects, 52%; and losing control over their life, 50%.

Although ASCO’s National Cancer Opinion Survey contains important data for oncologists to help them understand the public’s views on cancer research and oncology care and their fears about the cost and access to that care, the survey results may prove even more valuable to primary care physicians, who can use the findings to inform patients about their potential risk factors for developing cancer and prevention approaches to take to mitigate those factors.

“We need to work with our primary care physician colleagues who are seeing patients who don’t have cancer but who may have these various risk factors or unhealthy lifestyle behaviors that could be modified to reduce their risk of developing cancer,” said Dr. Schilsky.

ASCO’s National Cancer Opinion Survey was conducted online by Harris Poll in July 2017 and includes data polled from 4,016 Americans 18 years old and older. ASCO is now planning to conduct similar surveys annually to chart trends in the public’s perceptions of cancer and cancer-related issues over time.

To read the complete details of the National Cancer Opinion Survey’s results or to download a copy of the report, visit
www.asco.org/sites/new-www.asco.org/files/content-files/research-and-progress/documents/ASCO-National-Cancer-Opinion-Survey-Results.pdf. ■

2. Centers for Disease Control and Prevention: Cancers associated with overweight and obesity make up 40 percent of cancers diagnosed in the United States. October 3, 2017. Available at www.cdc.gov/media/releases/2017/p1003-vs-cancer-obesity.html. Accessed November 6, 2017.

ASCO’s National Cancer Opinion Survey was established by ASCO, in collaboration with the Harris Poll, to track the U.S. public’s views on cancer research and care. ASCO believes it is critical to understand what the public, including patients, think of, expect, and need from the nation’s cancer care system. The poll, supported by ASCO’s Conquer Cancer Foundation, is designed to be conducted annually to measure shifts in the public’s perceptions of a range of cancer-related issues over time.