Here is a brief look at the study findings and clinical implications of several recent and important clinical trials in neoplastic hematology. Attention is focused on myelodysplastic syndromes, multiple myeloma, and chronic lymphocytic leukemia.

Clinical Implications: Overall, these data support the possible clinical benefits of lenalidomide in lower-risk non-del(5q) myelodysplastic syndromes. Exploratory analyses to identify patients more likely to respond to lenalidomide showed that a higher proportion of patients (42.5%) with erythropoietin ≤ 100 mU/mL and prior use of erythropoiesis-stimulating agents achieved blood cell transfusion independence of ≥ 8 weeks. Prospective studies are warranted to validate this observation and to substantiate it with additional biologic and molecular data.2 Patients with higher endogenous erythropoietin levels may be less responsive to lenalidomide.3

Data have suggested that the combination of lenalidomide and erythropoietin may be beneficial in patients with lower-risk non-del(5q) myelodysplastic syndromes who are resistant to erythropoietin.4 Prior blood cell transfusion burden and use of erythropoiesis-stimulating agents, and possibly endogenous serum erythropoietin levels, may be used to select patients who are more sensitive to lenalidomide therapy. Median overall survival has not yet been reached in this study.1 Long-term  (≥ 5 years) follow-up data for overall survival is ongoing.

Question Asked: What is the significance of minimal residual disease in patients with newly diagnosed multiple myeloma? 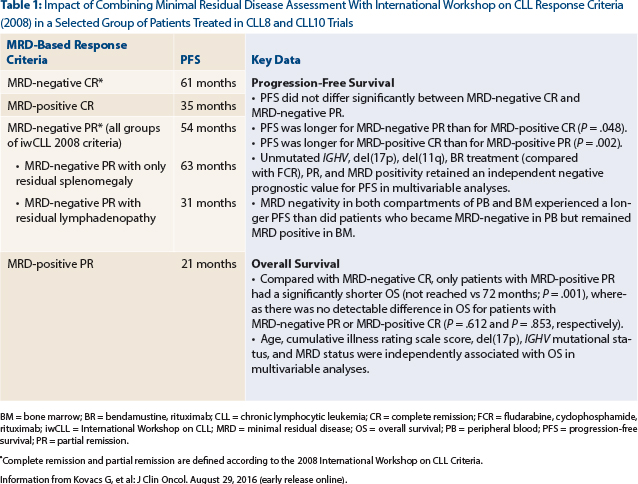 Clinical Implications: It is important to note that this was a meta-analysis (1990–2016) and not a prospective randomized trial. This analysis did not account for the type of minimal residual disease test used in each of the studies analyzed. Approaches to testing varied widely; the sensitivity of different minimal residual disease–testing protocols also varied.

However despite these caveats, the study has a powerful message: minimal residual disease–associated results were method-agnostic; in other words, if minimal residual disease is undetectable with a specific level of sensitivity, the results have similar significance irrespective of the method utilized. In my opinion, this study further lends support of incorporating minimal residual disease assessment (by an easily assessable and broadly applicable method) in clinical trials and subsequently—and hopefully soon—in routine clinical practice.

Clinical Trial: A multicenter (18 countries), randomized, open-label, phase III POLLUX trial,6 which included 569 patients with relapsed or refractory multiple myeloma who were randomized (in a 1:1 ratio) to receive either lenalidomide or dexamethasone (control group; n = 283) or similar therapy in combination with daratumumab (Darzalex; daratumumab group; n = 286)

Clinical Implications: Daratumumab was associated with infusion-related reactions and a higher rate of neutropenia. Such infusion reactions were mostly mild and were most common with the first infusion; they rarely resulted in drug discontinuation. Lenalidomide-refractory patients were excluded from the study. Patients who were older than 75 years of age or whose body mass index was less than 18.5 kg/m2 received dexamethasone at a dose of 20 mg weekly at the discretion of their physician. In my opinion and from a practical standpoint, the results of the CASTOR trial7 and now the POLLUX trial6 strongly favor the use of a daratumumab-based triplet regimen in patients with relapsed or refractory multiple myeloma who are not resistant or intolerant to bortezomib (Velcade) and lenalidomide, respectively.

Clinical Trial: Analysis of progression-free and overall survival in 554 patients from 2 randomized chronic lymphocytic leukemia (CLL) trials of the German CLL Study Group (CLL8: fludarabine and cyclophosphamide [FC] vs FC plus rituximab (Rituxan); CLL10: FC plus rituximab vs bendamustine plus rituximab) according to the end of therapy minimal residual disease assessed in peripheral blood at a threshold of 10−4 and International Workshop on CLL Criteria8,9

Question Asked: What is the value of minimal residual disease assessment, together with the evaluation of clinical response, in CLL after completion of therapy?

10. European Medicines Agency: Guideline on the use of minimal residue disease as an endpoint in chronic lymphocytic leukaemia studies. Available at http://www.ema.europa.eu/docs/en_GB/document_library/Scientific_guideline/2014/12/WC500179047.pdf. Accessed November 8, 2016.